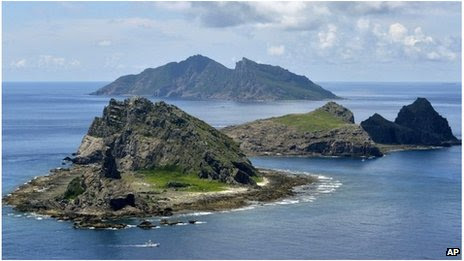 China has sent warplanes to its newly declared air defence zone in the East China Sea, state media reports.
The vast zone, announced last week, covers territory claimed by China, Japan, Taiwan and South Korea.
China has said all planes transiting the zone must file flight plans and identify themselves, or face "defensive emergency measures".
But Japan, South Korea and the US have all since flown military aircraft through the area.
Continue reading the main story

Japanese restraint in the face of Chinese efforts to modify the status quo is currently keeping the peace, potentially to the detriment of Japan's claim to the island”

James ManicomExpert, China-Japan security issues
The new dispute in an already tense region has raised concerns it could escalate into an unplanned military incident.
China's state news agency Xinhua quoted air force spokesman Col Shen Jinke as saying several fighter jets and an early warning aircraft had been deployed to carry out routine patrols as "a defensive measure and in line with international common practices".
He said the country's air force would remain on high alert and would take measures to deal with all air threats to protect national security.
In Xinhua's Chinese language version of the article, the colonel said the aircraft would "strengthen the monitoring of targets in the air defence zone and do their duty".
Continue reading the main story

'Destabilising'
The controversial air defence identification zone (ADIZ) includes islands known as Senkaku in Japan and Diaoyu in China, which are claimed by Japan, China and Taiwan.
Japan controls the islands, which have been the focus of a bitter and long-running dispute between Japan and China.
The zone also covers a submerged rock that South Korea says forms part of its territory.
China says the establishment of the zone was "completely justified and legitimate", but it has been widely condemned.
America, which called the move a "destabilising attempt to alter the status quo in the region", flew two unarmed B-52 bombers through the zone unannounced on Tuesday.
South Korea's Foreign Minister Yun Byung-se said on Wednesday that it had made "already tricky regional situations even more difficult to deal with".
Seoul said one of its military planes also entered the zone on Tuesday.
Continue reading the main story

Source: aviationdevelopment.org
On Thursday, Japan said its aircraft had conducted routine "surveillance activity" over the East China Sea zone, but did not specify when.
"Even since China has created this airspace defence zone, we have continued our surveillance activities as before in the East China Sea, including in the zone," said Japan's top government spokesman, Yoshihide Suga.
"We are not going to change this [activity] out of consideration to China," he added.
South Korea and China held talks on the zone on Thursday, but failed to reach any agreement.

Posted by theodore miraldi at 10:09 AM