Communication in the Age of Social Media 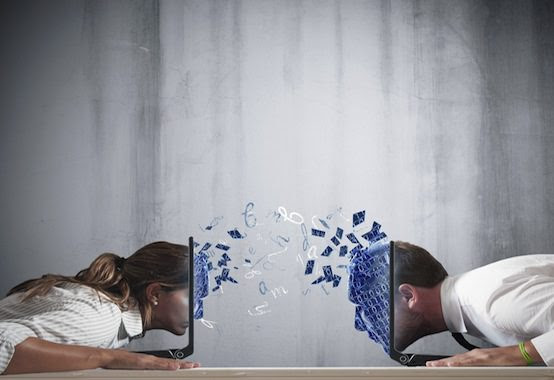 The Internet has changed the way we communicate. Most commonly, we see its effects permeate our grammatical discourse: the pronouncement of “selfie” as word of the year was perhaps the best indication of this. But our conversations have also changed in a deeper sense. According to some observationsby Atlantic contributor Andrew Simmons, it may help some teenagers release emotion:

On Facebook, even popular students post statuses in which they express insecurities. I see a dozen every time I log on. A kid frets that his longtime girlfriend is straying and wishes he hadn’t upset her. Another admits to being lonely (with weepy emoticons added for effect). Another asks friends to pray for his sick little sister. Another worries the girl he gave his number to isn’t interested because she hasn’t called in the 17 minutes that have passed since the fateful transaction. Another disparages his own intellect. “I’m so stupid, dad told me to drop out,” he writes. Another wonders why his parents are always angry, and why their anger is so often directed at him. “Brother coming home today,” another posts. “Gonna see how it goes.”

It seems social media may encourage less benign emotional expressions, as well. Relevant Magazine posted an article last week lamenting the angry discussions that often boil over on Facebook. “You log into Facebook and it has happened once again,” author Brandon W. Peach writes, “Some broad political sentiment sparks a flame-war and everyone seems to want to weigh in with a jab, meme, ad hominem attack or (arguably worst of all) a wall of text that begs for you to ‘see more.’” Sometimes, truly insightful discussions can take place on Facebook. But too often, a posted article or controversial status open up Pandora’s box, unleashing a swath of ridicule, offense, and disdain.
Does all this online emotion carry forward into real-time conversations? Forbescontributor Donna Sapolin doesn’t think so. In a Monday post, she shares a conversation she had with her son after a power blackout. He told her he was happy for the outage, because it led him and his friends to have a deep, meaningful conversation. She ponders:

It seems the younger generations are deeply hungry for meaningful face-to-face interactions but feel they have to devise a new approach in order to get beyond shallow chit-chat. This isn’t exactly surprising considering that the bulk of Gen X and Y communication takes place via texts, social media posts and email, and camaraderie takes the form of things watched or played together on screens. We’ve deemed these generations to be the most connected, but they may, in fact, be the most disconnected.

Facebook friends do not constitute true “community.” They are virtual presences, people we cannot see, hear, or touch. In discussing (or arguing) sensitive and personal topics with other users, it is impossible to know the immediate impact of our words. We cannot see furrowed brows, bit lips, or clenched fists. Thus, online discussions become immensely dramatic, sarcastic, and inflammatory—much more than usual face-to-face conversations.
If Sapolin is right, true face-to-face discourse is becoming more rare, even as our online presences devolve into emotion-spewing excess. How many high school students who pour out their souls online will have meaningful conversations with their grandmothers on Thanksgiving? How many people will Instagram pictures of turkey or post a “Happy Thanksgiving” status on Facebook, but never deeply converse with those they are breaking bread with?
To occupy our present space, with grace and candor, is perhaps one of the most difficult challenges of our technological age. Virtual reality’s isolated safety beckons appealingly to us. But if there’s one thing social media is teaching us, it is that there are better forms of communication—deeper, truer, sweeter—than it can offer.
http://www.theamericanconservative.com/our-evolving-discourse-communication-in-the-age-of-social-media/
Posted by theodore miraldi at 9:59 AM