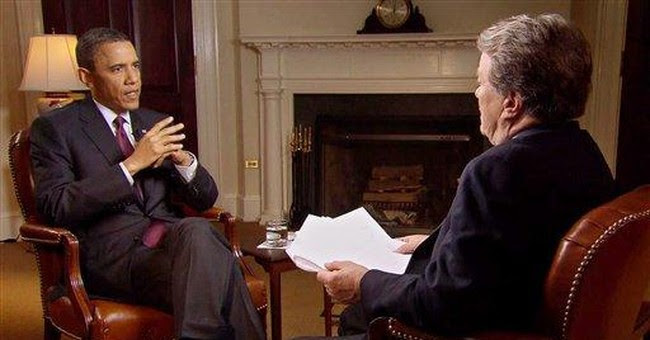 The New York Times published an unintentionally humorous headline on Dec. 23: "When '60 Minutes' Checks Its Journalistic Skepticism at the Door." The Times media columnist David Carr is suddenly stunned that "60 Minutes" has aired a puff piece on a serious political matter.


In his article, Carr doesn't breathe a word about Steve Kroft's long history of servile interviews with President Barack Obama, the most recent one in January when, at the president's request, he threw softballs at both Obama and Hillary Clinton. Carr's never written about Kroft.
Carr sees "60 Minutes" as a "journalistic treasure" because it's a rabble-rousing leftist outfit: "For more than four decades, the program has exposed CIA abuses, rogue military contractors and hundreds of corporate villains." So he was upset about the Dec. 15 "60 Minutes," which aired an interview with Gen. Keith Alexander, head of the National Security Agency. He wrote that "it was hard to watch the NSA segment and not wonder who was minding the store."
The interviewer in this case was CBS's John Miller, who Carr suggested was too close to the subject: "Mr. Miller is a former high-ranking official in the Office of the Director of National Intelligence and a former spokesman of the FBI whose worldview is built on going after bad guys and keeping the rest of us safe."
This must be opposed to the worldview of The New York Times -- which is based on being obsessively concerned with the civil liberties of the bad guys at the expense of our safety.
Any critic could watch the NSA segment and see it for what it is: a forum to allow the NSA boss to make his case for its surveillance programs. What's wrong with that? If this is inappropriate, then why did Carr not condemn the Dec. 22 "60 Minutes," which carried a Lesley Stahl softball profile of national security adviser Susan Rice, who is our "whip-smart ... quarterback of American foreign policy."
Stahl puffed up Rice and her "reputation" as an "idealist" who "ran into a Benghazi buzzsaw." Rice was "swept up into the dispute" over Benghazi. Rice the "idealist" didn't lie on five Sunday news interviews. Stahl insisted "a former senior intelligence official told us that the talking point that the Benghazi attack was spontaneous was precisely what classified intelligence reports said at the time."
How in blazes is this less of a powder-puff presentation than Miller's segment on the NSA? Miller pushed Alexander on how Edward Snowden could have stolen millions of secret documents: "This happened on your watch. A 20-something-year-old high school dropout contractor managed to walk out with, in essence, the crown jewels. Did you offer to resign about the Snowden incident?" The general said yes.
By contrast, Stahl accompanied Rice to her daughter's Sunday soccer game (to underline portentously that she's the first national security adviser to be a mom) before they ended with a brief bit on Benghazi. Rice fatuously announced, "I don't have time to think about a false controversy."
Stahl could only ask, "But the questions keep coming. I mean, when someone heard that I was going to be talking to you, they said, 'You have to ask her why Hillary Clinton didn't do the interview that morning.' Did she smell trouble?"
Rice said Clinton "had just gone through an incredibly painful and stressful week" because she "had to reach out to the families" and "greet the bodies upon their arrival at Andrews Air Force Base." When "60 Minutes" had a chance to ask Clinton why she skipped the Sunday shows, Kroft failed to do so. He only asked her sympathetically if she blamed herself for Benghazi.
Carr, like many liberals, thinks the list of CBS offenses began with its Oct. 27 Benghazi segment with Lara Logan, in which the network was fooled by Dylan Davies, who claimed to be an eyewitness on the scene of the consulate attack but wasn't. This was a serious mistake, an error compounded by a bungled "eyewitness account" book deal Davies struck with Simon & Schuster, a corporate cousin of CBS (which it failed to disclose).
Even in the segments Carr hates -- the Benghazi and NSA ones -- Obama's mostly absent. The name "Obama" was never uttered in the Benghazi segment, and this was its one mention by Miller: "Do you think (German) Chancellor Merkel hears President Obama's calls?"
So why isn't Carr upset about how Obama doesn't matter, doesn't seem to be president when things go dramatically wrong? Who is "minding the store" at CBS on holding Obama accountable? As with Kroft, Carr doesn't care. Obama's not the kind of "villain" that "60 Minutes" is supposed to hunt.
The left's formula is simple. If it's a "60 Minutes" investigative hit piece against a conservative, it's journalism. If it's a slobbering puff piece promoting a liberal, it's journalism.
http://townhall.com/columnists/brentbozell/2013/12/25/60-minutes-tool-of-the-state-n1768245/page/full
Posted by theodore miraldi at 9:12 AM