A Deadly Mix in Benghazi 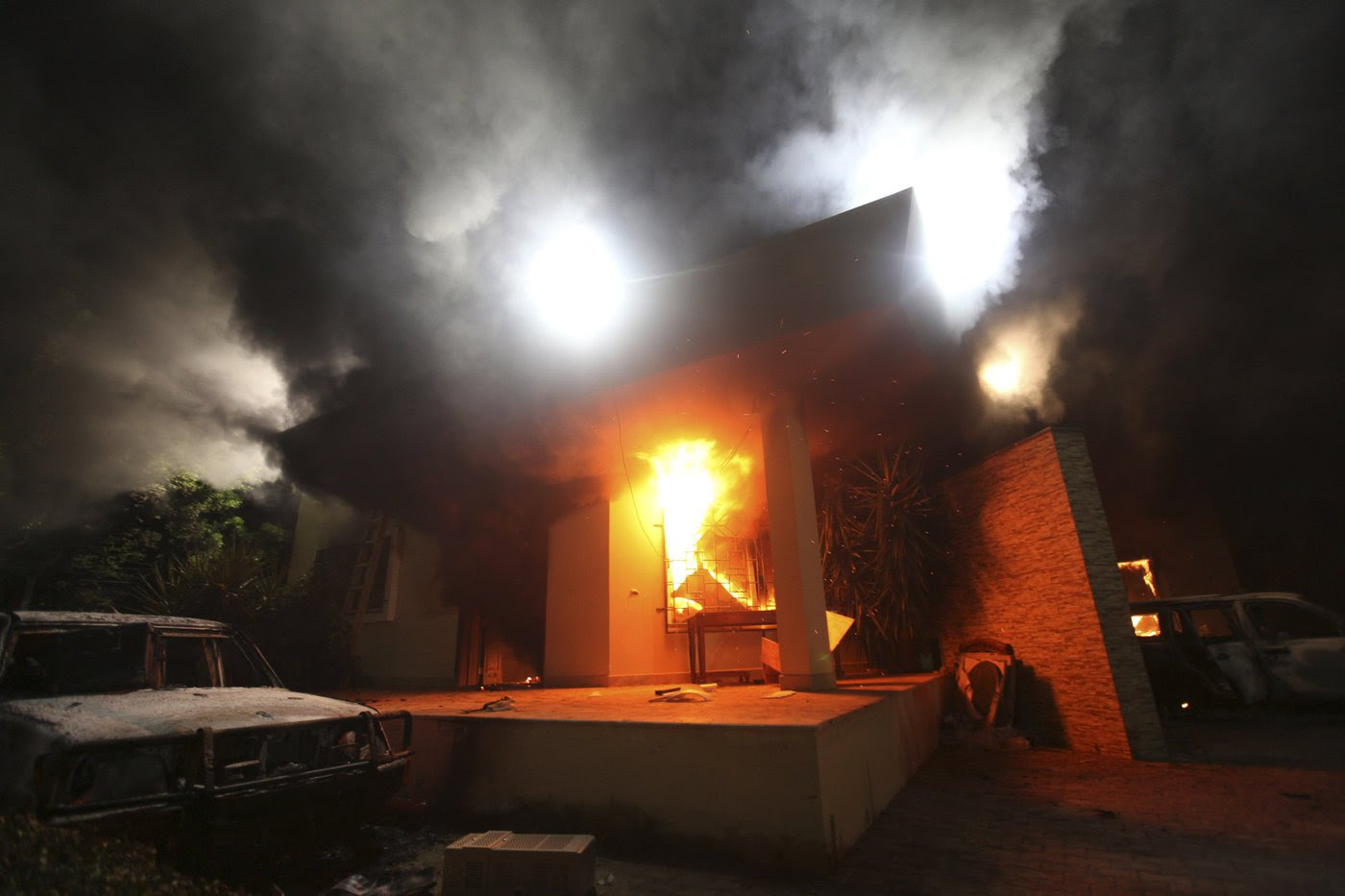 
ABOYISH-LOOKING AMERICAN DIPLOMAT was meeting for the first time with the Islamist leaders of eastern Libya’s most formidable militias.
It was Sept. 9, 2012. Gathered on folding chairs in a banquet hall by the Mediterranean, the Libyans warned of rising threats against Americans from extremists in Benghazi. One militia leader, with a long beard and mismatched military fatigues, mentioned time in exile in Afghanistan. An American guard discreetly touched his gun.
“Since Benghazi isn’t safe, it is better for you to leave now,” Mohamed al-Gharabi, the leader of the Rafallah al-Sehati Brigade, later recalled telling the Americans. “I specifically told the Americans myself that we hoped that they would leave Benghazi as soon as possible.”
Yet as the militiamen snacked on Twinkie-style cakes with their American guests, they also gushed about their gratitude for President Obama’s support in their uprising against Col. Muammar el-Qaddafi. They emphasized that they wanted to build a partnership with the United States, especially in the form of more investment. They specifically asked for Benghazi outlets of McDonald’s and KFC.
The diplomat, David McFarland, a former congressional aide who had never before met with a Libyan militia leader, left feeling agitated, according to colleagues. But the meeting did not shake his faith in the prospects for deeper involvement in Libya. Two days later, he summarized the meeting in a cable to Washington, describing a mixed message from the militia leaders.
Despite “growing problems with security,” he wrote, the fighters wanted the United States to become more engaged “by ‘pressuring’ American businesses to invest in Benghazi.”
The cable, dated Sept. 11, 2012, was sent over the name of Mr. McFarland’s boss, Ambassador J. Christopher Stevens.
Later that day, Mr. Stevens was dead, killed with three other Americans in Benghazi in the most significant attack on United States property in 11 years, since Sept. 11, 2001.

Four Americans died in attacks on a diplomatic mission and a C.I.A. compound in Benghazi.
As the attacks begin, there are seven Americans at the mission, including five armed diplomatic security officers; the information officer, Sean Smith; and Ambassador J. Christopher Stevens. Both Mr. Smith and Ambassador Stevens die in the attack.
The cable was a last token of months of American misunderstandings and misperceptions about Libya and especially Benghazi, many fostered by shadows of the earlier Sept. 11 attack. The United States waded deeply into post-Qaddafi Libya, hoping to build a beachhead against extremists, especially Al Qaeda. It believed it could draw a bright line between friends and enemies in Libya. But it ultimately lost its ambassador in an attack that involved both avowed opponents of the West and fighters belonging to militias that the Americans had taken for allies.
Months of investigation by The New York Times, centered on extensive interviews with Libyans in Benghazi who had direct knowledge of the attack there and its context, turned up no evidence that Al Qaeda or other international terrorist groups had any role in the assault. The attack was led, instead, by fighters who had benefited directly from NATO’s extensive air power and logistics support during the uprising against Colonel Qaddafi. And contrary to claims by some members of Congress, it was fueled in large part by anger at an American-made video denigrating Islam.
A fuller accounting of the attacks suggests lessons for the United States that go well beyond Libya. It shows the risks of expecting American aid in a time of desperation to buy durable loyalty, and the difficulty of discerning friends from allies of convenience in a culture shaped by decades of anti-Western sentiment. Both are challenges now hanging over the American involvement in Syria’s civil conflict.
The attack also suggests that, as the threats from local militants around the region have multiplied, an intensive focus on combating Al Qaeda may distract from safeguarding American interests.
In this case, a central figure in the attack was an eccentric, malcontent militia leader, Ahmed Abu Khattala, according to numerous Libyans present at the time. American officials briefed on the American criminal investigation into the killings call him a prime suspect. Mr. Abu Khattala declared openly and often that he placed the United States not far behind Colonel Qaddafi on his list of infidel enemies. But he had no known affiliations with terrorist groups, and he had escaped scrutiny from the 20-person C.I.A. station in Benghazi that was set up to monitor the local situation.
Mr. Abu Khattala, who denies participating in the attack, was firmly embedded in the network of Benghazi militias before and afterward. Many other Islamist leaders consider him an erratic extremist. But he was never more than a step removed from the most influential commanders who dominated Benghazi and who befriended the Americans. They were his neighbors, his fellow inmates and his comrades on the front lines in the fight against Colonel Qaddafi.
To this day, some militia leaders offer alibis for Mr. Abu Khattala. All resist quiet American pressure to turn him over to face prosecution. Last spring, one of Libya’s most influential militia leaders sought to make him a kind of local judge.
Fifteen months after Mr. Stevens’s death, the question of responsibility remains a searing issue in Washington, framed by two contradictory story lines.
One has it that the video, which was posted on YouTube, inspired spontaneous street protests that got out of hand. This version, based on early intelligence reports, was initially offered publicly by Susan E. Rice, who is now Mr. Obama’s national security adviser.
The other, favored by Republicans, holds that Mr. Stevens died in a carefully planned assault by Al Qaeda to mark the anniversary of its strike on the United States 11 years before. Republicans have accused the Obama administration of covering up evidence of Al Qaeda’s role to avoid undermining the president’s claim that the group has been decimated, in part because of the raid that killed Osama bin Laden.
The investigation by The Times shows that the reality in Benghazi was different, and murkier, than either of those story lines suggests. Benghazi was not infiltrated by Al Qaeda, but nonetheless contained grave local threats to American interests. The attack does not appear to have been meticulously planned, but neither was it spontaneous or without warning signs.
Mr. Abu Khattala had become well known in Benghazi for his role in the killing of a rebel general, and then for declaring that his fellow Islamists were insufficiently committed to theocracy. He made no secret of his readiness to use violence against Western interests. One of his allies, the leader of Benghazi’s most overtly anti-Western militia, Ansar al-Shariah, boasted a few months before the attack that his fighters could “flatten” the American Mission. Surveillance of the American compound appears to have been underway at least 12 hours before the assault started.
The violence, though, also had spontaneous elements. Anger at the video motivated the initial attack. Dozens of people joined in, some of them provoked by the video and others responding to fast-spreading false rumors that guards inside the American compound had shot Libyan protesters. Looters and arsonists, without any sign of a plan, were the ones who ravaged the compound after the initial attack, according to more than a dozen Libyan witnesses as well as many American officials who have viewed the footage from security cameras.

A 20-person team from the Central Intelligence Agency is in the compound known as the Annex, about a half-mile from the mission, where the security officers Tyrone S. Woods and Glen A. Doherty are later killed.
The Benghazi-based C.I.A. team had briefed Mr. McFarland and Mr. Stevens as recently as the day before the attack. But the American intelligence efforts in Libya concentrated on the agendas of the biggest militia leaders and the handful of Libyans with suspected ties to Al Qaeda, several officials who received the briefings said. Like virtually all briefings over that period, the one that day made no mention of Mr. Abu Khattala, Ansar al-Shariah or the video ridiculing Islam, even though Egyptian satellite television networks popular in Benghazi were already spewing outrage against it.
Members of the local militia groups that the Americans called on for help proved unreliable, even hostile. The fixation on Al Qaeda might have distracted experts from more imminent threats. Those now look like intelligence failures.


More broadly, Mr. Stevens, like his bosses in Washington, believed that the United States could turn a critical mass of the fighters it helped oust Colonel Qaddafi into reliable friends. He died trying.
CLICK ON BELOW LINK TO READ THE FULL ARTICLE
http://www.nytimes.com/projects/2013/benghazi/?nl=todaysheadlines&emc=edit_th_20131229#/?chapt=0
Posted by theodore miraldi at 11:16 AM