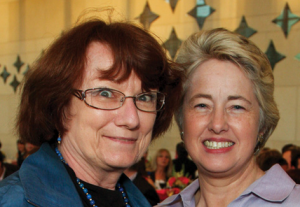 A judge in Houston has slapped down lesbian Mayor Annise Parker’s decision to give benefits to spouses of same-sex couples who were married in other jurisdictions, issuing a temporary restraining order.
The ruling from Judge Lisa Millard found that “imminent and irreparable” injury would be imposed on the plaintiffs without the order. The court’s next hearing on the case is Jan. 6.
WND reported earlier this month accusations that Parker was instituting “mob rule” in Houston.
A complaint from Jared Woodfill, chairman of the local Harris County Republican Party, and others, followed her Nov. 20 decision. It accused Parker of “unilaterally dispos[ing] of the Houston City Charter and the Texas Constitution without anything even resembling democratic process.”
A voter-approved charter amendment in 2001 banned benefits to same-sex couples.
Parker has lived in a lesbian relationship with Kathy Hubbard for 24 years but will remain ineligible for benefits because she is not legally married.
Woodfill asked: “If that is what Mayor Parker thinks of law and order, how can she effectively serve as the chief executive officer of a large municipality, whose first duty is to ensure law and order?”
He said that if the city loses “the rule of law, we give in to mob rule and crony politics, aptly described once as the ‘Chicago way.’”
Millard found Parker’s actions violated the Texas Family Code, the state constitution and the Houston charter.
Woodfill said: “Houston deserves better. Harris County deserves better. Parker does not have the authority to preempt Texas law to promote her own agenda. The rule of law is what makes freedom possible. We give an inch, and the power-hungry among us will take a mile. Today, we protect more than marriage – we protect freedom for all Texans and Americans.”
Judge Millard wrote: “If the temporary injunction is not issued, the defendants’ unlawful policy providing benefits to same-sex spouses of employees that have been married in jurisdictions that recognize same-sex marriage providing benefits to same sex couples will remain in place; therefore, the harm to plaintiffs ‘constitutional and statutory rights is imminent.”
Parker argued that it is “unconstitutional” for the city to deny benefits to same-sex spouses.”
The city’s 2001 charter amendment, however, states: “Except as required by state or federal law, the city of Houston shall not provide employment benefits, including health care, to persons other than employees, their legal spouses and dependent children.”
Parker believes the language applies to any and all marriages even if not recognized in every state. Texas statutes still reflect the Defense of Marriage Act ethos of “one man and one woman.”
But Parker said same-sex marriages conducted in any jurisdiction where the act is legal, including foreign countries and more than a dozen states, will be recognized.
Parker’s “equality” argument, however, apparently does not accommodate polygamous marriages, which are recognized in some parts of the world.
“The amendment specifically permits benefits to be provided to legal spouses of employees,” Parker said. “I can only assume that it was contemplated that there would never be a time when same-sex couples were in legally sanctioned relationships.”
Parker said the Texas Defense of Marriage Act can be ignored.
Dave Welch, president of the U.S. Pastor’s Council, and also present at the hearing as a party to the suit, said the mayor’s actions bordered an anarchy.
“Mayor Parker has again shown that those who reject the existence of a moral law undergirding civil law have no reservations about running roughshod over such mundane items as state constitutions, city charters and the basic rule of law,” Welch said.
He said Parker’s “unilateral act of recognizing same-sex marriages from other states and extending employee benefits to those ‘spouses’ follows the same path of anarchy as her good friend Gavin Newsom, mayor of San Francisco who likewise defied state law.”
Jonathan Saenz, president and attorney for the non-profit advocacy group Texas Values, told WND that Parker’s actions were synonymous with “mob rule.”
“Mayor Parker’s self-serving efforts to force city staff to willfully violate the Texas Constitution is one of the most dangerous and egregious forms of a Washington-style power grab I have ever seen,” Saenz said. “She’s practically telling Gov. Perry, Attorney General Abbott and the people of Texas to ‘Come and Take It.’”
http://www.wnd.com/2013/12/citys-lesbian-mayor-sparks-anarchy-uproar/

Posted by theodore miraldi at 8:48 AM