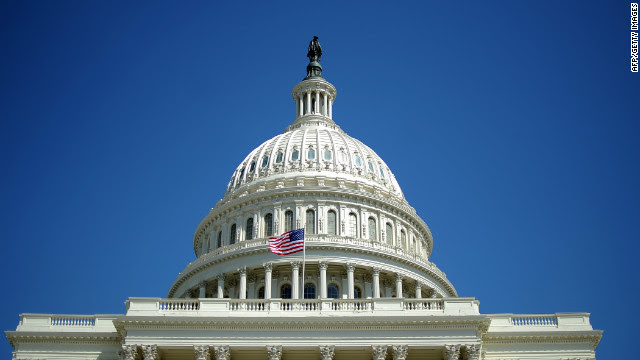 Washington (CNN) - Democrats have lost their advantange and Republicans now have a slight edge in the battle for control of Congress, according to a new national poll.
A CNN/ORC International survey released Thursday also indicates that President Barack Obama may be dragging down Democratic congressional candidates, and that the 2014 midterm elections are shaping up to be a low-turnout event, with only three in 10 registered voters extremely or very enthusiastic about voting next year.Two months ago, Democrats held a 50%-42% advantage among registered voters in a generic ballot, which asked respondents to choose between a Democrat or Republican in their congressional district without identifying the candidates. That result came after congressional Republicans appeared to overplay their hand in the bitter fight over the federal government shutdown and the debt ceiling.
But the Democratic lead evaporated, and a CNN poll a month ago indicated the GOP holding a 49%-47% lead. The new survey, conducted in mid-December, indicates Republicans with a 49%-44% edge over the Democrats.
The 13-point swing over the past two months follows a political uproar over Obamacare, which included the botched rollout of HealthCare.gov and controversy over the possiblity of insurance policy cancelations due primarily to the new health law.
"Virtually all the movement toward the GOP has come among men," CNN Polling Director Keating Holland said. "Fifty-four percent of female voters chose the Democratic candidate in October; 53% pick the Dem now. But among male voters, support for Democratic candidates has gone from 46% in October to just 35% now."
Republicans have a 17-seat advantage in the House and Democrats hold a 55-45 majority in the Senate.
While the generic ballot question is one of the most commonly used indicators when it comes to the battle for Congress, the poll results are a long way from predicting what will happen next November.
"There is just under a year to go before any votes are actually cast and the 'generic ballot' question is not necessarily a good predictor of the actual outcome of 435 separate elections," Holland cautioned.
"A year before the 2010 midterms, for example, the Democrats held a 6-point lead on the generic ballot but the GOP wound up regaining control of the House in that election cycle, thanks to an historic 63-seat pickup," he added.Lack of enthusiasm
According to the poll, only three in 10 registered voters say they are extremely or very enthusiastic about voting for Congress next year, compared to more than four in 10 who felt that way in late 2009. And 43% say they're not enthusiastic about voting, up from 25% who felt that way four years ago.
Democratic voters seem particularly unenthusiastic about voting, and that is likely to benefit the GOP. Thirty-six percent of Republicans say they're extremely or very enthusiastic about voting. That number drops to 22% among Democrats.
Another GOP advantage is the President's standing with the public: 55% of registered voters say that they are more likely to vote for a congressional candidate who opposes the President than one who supports him and four in 10 say they are likely to vote for a candidate who supports Obama.
"Those kind of numbers spelled early trouble for the Democrats before the 1994 and 2010 midterms, and for the GOP before the 2006 elections," Holland said.
The poll was conducted for CNN by ORC International from December 16-19, with 1,035 adults nationwide questioned by telephone. The survey's overall sampling error is plus or minus three percentage points.
http://politicalticker.blogs.cnn.com/2013/12/26/cnn-poll-gop-has-edge-in-early-midterm-indicator/
Posted by theodore miraldi at 9:20 AM