Democratic: Obamacare could have 'meltdown 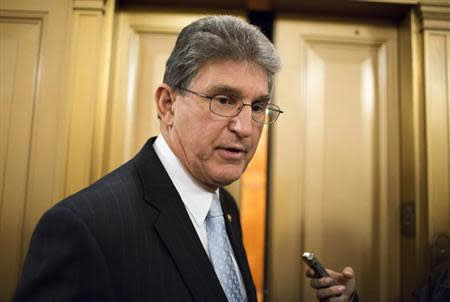 WASHINGTON (Reuters) - President Barack Obama's healthcare law could have a "meltdown" and make it difficult for his Democratic Party to keep control of the U.S. Senate next year if ongoing problems with the program are not resolved, a Democratic senator said on Sunday.
Senator Joe Manchin of West Virginia, who has urged delaying a penalty for people who do not enroll for health insurance in 2014 under the law, told CNN that a transitional year was needed for the complex healthcare program, commonly known as Obamacare, to work.
"If it's so much more expensive than what we anticipated and if the coverage is not as good as what we had, you've got a complete meltdown at that time," Manchin told CNN's "State of the Union" program.
"It falls of its own weight, if basically the cost becomes more than we can absorb, absolutely."
The White House has been scrambling for months to control the damage from the botched October 1 launch of the law, formally called the Affordable Care Act, which aimed at making sure that millions of Americans without health insurance are able to receive medical coverage.
There have been complaints from consumers about higher premiums than they previously had to pay for health insurance after their old plans were canceled because of new standards under the law, as well as lingering problems with the main web portal used to sign up for insurance, HealthCare.gov.
Manchin said Senate Democrats who are up for re-election next year are "feeling the weight" of the program's woes and could have trouble keeping their majority in the chamber.
Republicans have been highlighting the healthcare law's difficulties as they seek to gain the six seats they would need to win control of the 100-member Senate.
"It needs to turn around," Manchin said of Obamacare. "I'm not going to say that I think we will lose it (the Senate). It's going to be extremely challenging. We have some very good people who are truly there, I believe, for the right reason. They're going to be challenged for the wrong reason."
Obama acknowledged on Friday that that the bungled launch of the healthcare law was his biggest mistake of 2013. His public approval numbers have dropped to historic lows over the law's debut.
The president said more than 1 million people have signed up so far for new coverage under Obamacare through HealthCare.gov, which services 36 states, and 14 state-run marketplaces.
A day earlier, Obama's administration said people whose insurance plans were canceled because of the law may claim a "hardship exemption" to the requirement that all Americans must have coverage by March 31 next year or face a penalty.
Manchin, a conservative Democrat whose state of West Virginia has been increasingly trending Republican, has made no secret of his frustration over the program's fits and starts.
Last month he introduced legislation to delay by a year the $95 penalty for failing to sign up for health insurance, saying Americans should not be penalized while Obamacare is going through its "transition period."
Manchin does not face re-election next year, but some Democrats who do have also urged changes to the program, such as extending the open enrollment period beyond the March 31 deadline. One third of the Senate is re-elected every two years.
(Reporting By Susan Cornwell; editing by Christopher Wilson)
http://ca.news.yahoo.com/democratic-senator-says-obamacare-could-39-meltdown-39-172125028.html
Posted by theodore miraldi at 6:42 AM