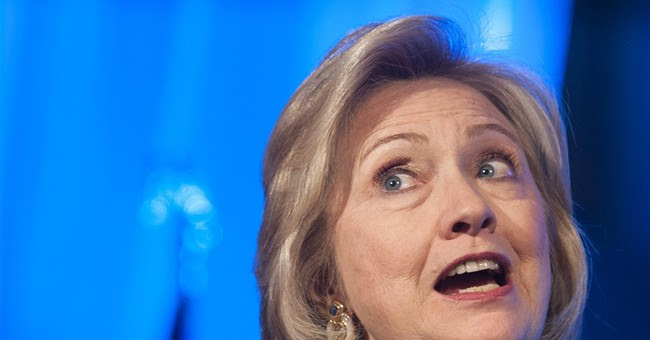 If you walk along the quaint, cobblestoned streets of Georgetown, in Washington, D.C., you can see ads for newly renovated townhomes “starting at $3.945 million.” That’s not surprising for this famously liberal enclave. Something else jumps at you, the number of bumper stickers on Mercedes and Audi automobiles that say: “I’m ready for Hillary.” These are surely head-scratchers. Are they simply folks who backed the former Sec. of  State in `08 who defiantly maintained their allegiance? Or, are they among the glitterati like Barbara Walters, who are crestfallen at President Obama’s failure to be their new “messiah.”

If the latter, then it’s an extraordinary thing to see liberal political activists confessing to dissatisfaction with the most leftwing president in U.S. history. And so early in his second term, too. After all, Mr. Obama has delivered on the promises that Bill Clinton failed to keep. The health care takeover is called ObamaCare, not HillaryCare. And from the war on coal, to promoting abortion worldwide, to repealing the ban on recruiting homosexuals for the military, to withdrawal from Iraq, it is Barack Obama who has achieved the liberal wish list.
Washington Post columnist Jennifer Rubin’s “Right Turn” column cites the top ten disasters that conservatives attribute to Hillary Clinton’s tenure at State. It is a thoroughgoing indictment of what Rubin calls a legacy of mismanagement.
Still, voters in primaries on the Democratic side of the aisle are unlikely to be much moved by what conservatives think of the Hillary Clinton record. Although there is increasing division in the country, we have seen conservatives and liberals come together in Congress and elsewhere on some issues of foreign policy. For example, there was little enthusiasm on any side for a further entanglement in Syria’s ongoing civil war.
Hillary Clinton has to worry much more about her record as U.S. Senator from New York. This is the record that was so devastatingly detailed in 2007 by New York Times writers Jeff Gerth and Don Van Natta, Jr. This is a long, analytical piece that outlines Sen. Clinton’s many dodges and weaves during the run-up to the Iraq war. She was for it before she was against it. But her efforts to play the hawk and the dove are a surprising echo of her husband’s own record in the White House. Bill Clinton is on record onboth sides of the first Gulf War.
This article, appearing half a year before the Iowa Caucuses of 2008, can give us a strong indication why Sen. Barack Obama bested Sen. Clinton in that first match-up for liberal activists. And it shows why many of the party’s most committed rejected her as a standard-bearer that year. “Hillary’s War,” the Gerth-Van Natta article, is readily accessible to anyone who can google it with “New York Times.”
At this festive time of year, we are reminded of Charles Dickens’ famousChristmas Carol. And the Hollywood version of the classic George C. Scott Scrooge gives us a scene worthy of remembering. Many a child had nightmares after watching the entrance of Marley’s Ghost into Ebenezer Scrooge’s bedchamber.
The scary ringing of the bell by Marley’s Ghost is one of the creepier parts of the scene.
For political junkies, that ringing bell may not remind so much of Salvation Army kettles as it does of the iconic Hillary Clinton campaign ad. The ringing telephone in the Oval Office was the most famous political ad from the entire 2008 cycle.The Clinton for President campaign wanted Americans to think that she had been tested and would be the seasoned leader the nation yearned for.
Conservatives need to remember that it is not conservatives who dominate the primaries and caucuses that select the next Democratic nominee. And for all the hoopla about being “Ready for Hillary,” she will have to defend not just her record as Barack Obama’s Sec. of State, but her “long and winding road” on the Iraq war. It shows a wily but unprincipled character, eager to get on the right side of the polls. For the invasion when seeming tough is the order of the day. Against the occupation when Iraq’s endless sectarian strife makes Operation Iraqi Freedom a bitter joke.
Her record will follow her around, just like those chains and cashboxes that Jacob Marley’s Ghost had to drag with him into Scrooge’s dark and freezing bedchamber. That record should provide plenty of fodder in a general election match-up to any careful analysis.
But it will be most interesting to how enterprising young liberals take on the supposedly invincible former Secretary of State. Her entire record will be laid out in detail. Surely, Barack Obama is not the only intelligent leader on the left who sees a weakness to be exploited. Many of those liberal activists—the ones who actually decide these things-- will conclude that at 3 a.m., they want someone else to answer that red telephone in the White House. And Hillary may yet find out that her record—the entirety of it--makes a great deal of difference.
http://townhall.com/columnists/kenblackwell/2013/12/21/hillarys-war-and-marleys-ghost-n1766686/page/full
Posted by theodore miraldi at 8:58 AM