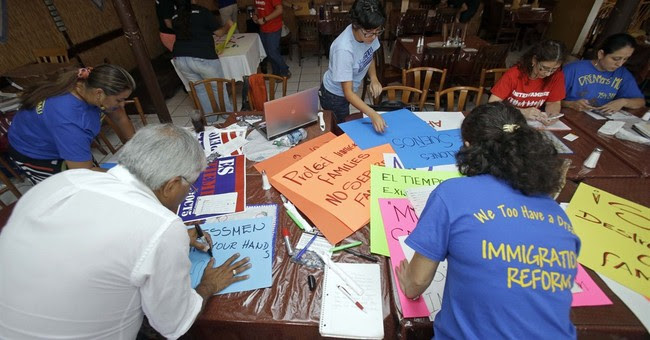 Despite the fact that the immigration reform debate has largely centered on a path to citizenship, a recent poll found that Hispanics and Asian-Americans are most concerned about relief from the threat of deportation.
Although 89% of 701 Hispanics and 72% of 802 Asian-Americans still want a pathway to citizenship, pluralities in both demographics believe deportation is the more urgent issue:

By 55% to 35%, Hispanics say that they think being able to live and work in the United States legally without the threat of deportation is more important for unauthorized immigrants than a pathway to citizenship. Asian Americans hold a similar view, albeit by a smaller margin—49% to 44%.

Both demographic groups are especially important because (1) they make up a massive majority of America's legal and illegal immigrant totals, (2) a majority of Hispanic adults and a majority of Asian-American adults currently in the USimmigrated, and (3) they are relatively active voters who favored Obama by a huge margin (70%) in 2012.
If comprehensive immigration reform misses its moment and fails, Republicans may lose both Hispanic and Asian American votes. CBS News reports:

Yet there is some hope from the research for those Republicans who are staunchly opposed to easing deportation laws. Surprisingly, illegal immigration reform is not at the top of the agenda for most individuals in the high-immigrant demographics:
http://townhall.com/tipsheet/nicolebailey/2013/12/20/illegal-immigrants-prioritize-deportation-relief-n1766632?utm_source=thdaily&utm_medium=email&utm_campaign=nl
Posted by theodore miraldi at 8:48 AM