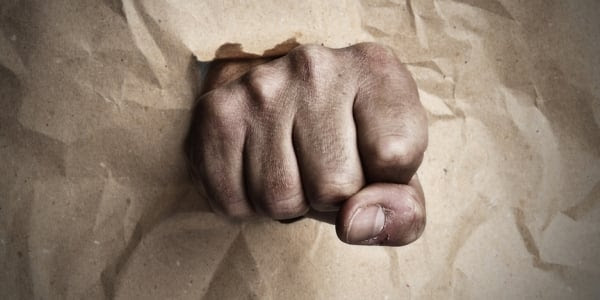 The New York Times believes the threat of man-made global warming is unquestionably real, but -- faced with a growing number of victims of black-on-white violence --- says claims of a "Knockout Game" could just be a "myth." Go figure. At any rate, the once influential Times has squandered its hold on these lawmakers -- Republican and Democrat -- who are declaring war ...

Jim Tedisco, a Republican member of the New York State Assembly, is fed up with the “Knockout Game,” telling WND he sympathizes with the victims of the attacks and has contempt for the “twisted and cowardly thugs” behind the violence.

“Killing or injuring a person with one punch is no game and can’t be taken lightly,” Tedisco told WND. “Twisted and cowardly thugs are preying on innocent bystanders, and they don’t care if the victims are young, old, a man or woman.”
In the racially charged and sometimes deadly crime, one or more assailants, usually black, target a randomly selected white person and, for amusement, try to knock out the unsuspecting victim with a single punch.
Now along with Democrat and Republican colleagues, Tedisco is sponsoring a bill called the Knockout Game Deterrent Act. Among those who want tougher penalties are State Assemblyman Dov Hikind of Brooklyn and New York City Council Member Peter Vallone Jr.
Despite the documented violence caused by the Knockout Game, including six deaths nationwide since 2009, some on the left are downplaying the violence.
Numerous liberal commentators and news outlets have begun to disparage those who report factually on the Knockout Game. A Los Angeles Times columnist called the game a “faux trend.” A Slate writer claims that those concerned about the Knockout Game have “concoct[ed] weird trends and games out of thin air.”
Black mobs routinely terrorize cities across the country, but the media and government are silent. Read the detailed account of rampant racial crime in “White Girl Bleed A Lot: The Return of Racial Violence to America and How the Media Ignore It.”
The New York Times believes there is actually a question as to whether the Knockout Game is “a spreading menace or a myth.”
Vallone, head of New York City’s Public Safety Committee with oversight over the police department, insists there’s no question. Speaking out about the Knockout Game, he told WND,“People who don’t believe that it exists in NYC right now remind me of people who used to say the Internet is just a fad.”
Tedisco also has a response to those who quibble over whether the Knockout Game is a “trend.”
“Anyone who thinks these Knockout assaults are a ‘myth’ should talk to the victims and their families,” he told WND. “Who defines what a trend is? Is it five people who are attacked, 10, 20, 100?”
The bottom line for Tedisco is that the pattern of behavior is a social problem. He asks, “No matter the number, should we not do something significant about this type of crime?
“The victims are real people whose lives are not only being put in jeopardy but in many cases destroyed both physically and emotionally.”
Regardless of the label one chooses to describe the Knockout Game, the violent criminal behavior has taken lives and impacted communities.
As WND reported this month, there have been at least six deaths nationwide as a result of the Knockout Game.
Tedisco draws a distinction between youthful hijinks and malicious harm.
Tedisco explained to WND, “I support youthful offender status for low-level crimes like graffiti and slashing tires.
“However,” he added, “our compassion for some young people who have made mistakes and have had difficult childhoods shouldn’t come above and beyond our first priority, which is protecting the public from being victimized.
“That’s why I and state Senator Hugh Farley along with several of our colleagues from both sides of the aisle have introduced first-in-the-nation legislation, the Knockout Game Deterrent Act, to try and prevent these brutal assaults.”
As WND has reported, several Democrat and Republican lawmakers in New York are speaking out against the Knockout Game.
Vallone is seeking harsher punishments for those involved in the malicious act.
In his role as head of the city’s Public Safety Committee, Vallone is pushing to punish Knockout Game attackers as felons.
“The intent here is to more than just injure, it is to seriously injure, and this type of premeditated assault should be a felony,” he said.
http://www.wnd.com/2013/12/lawmaker-hits-back-at-twisted-knockout-gamers/
Posted by theodore miraldi at 10:38 AM