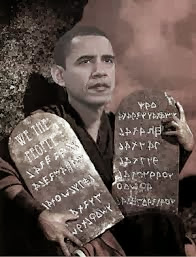 
All this time I have been laboring under the false impression that the Congress was constitutionally assigned the duty of making and changing (amending) law(s) for the country.

Silly me!  I am SO embarrassed!  Just shows how dumb a poor ole swamp rat like yours truly can actually be, I suppose.

Anyway, Mr. Obama has set me straight on that.  He has shown me that HE has the power to make law, and change law, and enforce law or -- choose NOT to enforce law -- as HE chooses.

Why, Mr. Obama has changed the Affordable Care Act (Obamacare) some 19 or 20 times now (For more on Obama's changes to Obamacare visit politifact.com  ) all without any aid from the national legislature -- the Congress.
All things considered, one must ask WHY we even have a Congress?  Couldn't we save major bucks by just dissolving the Congress and have done with it?   I mean, heck, we've got Obama -- The Law Giver as our President!  What need have we of a Congress?
With Obama it is all give and take.  He gives -- AND -- he takes.  The man refuses to acknowledge his limitations under the constitution. He just ignores it in part or in whole -- as the notion strikes him.
This is not just wrong, gentle reader, this is ILLEGAL.
Playing fast and loose with the US Constitution, under normal circumstances, would get one placed UNDER the jailhouse!  No longer.
But these are not normal times.  We live now in a "post constitution era" in America. We find ourselves in the short-lived period between freedom and slavery.  Once a nation begins a slide into slavery the pace quickens and doesn't take very long to find an entire people clasped in the bonds of involuntary servitude.
I find it ironic that Obama, a black man,  is so intent on leading his people, white and black, into tyranny induced slavery in America. There's something just plain vulgar about that.
The Obama administration is proving to be more corrupt that the Grant, the Harding, or the Nixon administrations.  I was not around for the first two, but I lived every minute of the Nixon administration  and I can tell you the American people never sensed a threat to their freedom from Nixon as they do from Obama.
When Nixon's party, the Republican Party,  realized the enormity of his misdeeds, they quickly formed a committee and paid Nixon a visit and read him the riot act.  They told him, flat out, that he was going to be impeached and the Congress WOULD find him guilty and he WOULD be removed from office in disgrace, unless, he resigned -- and resigned immediately.  Nixon resigned and managed by doing so to save SOME face and enough dignity to gracefully exit the White House while staff and a few members of his administration stood clustered near the helicopter LZ looking on in tears.
It was a trying time for the republic, but we survived and the constitution proved, once again, its value and worth as a foundation document and the protector of freedom.
On December 31st, 2012, the non-partisan Judicial Watch released its annual "Most Corrupt Politicians in Washington List." On that list were:  President Obama and key members of his Democrat cabinet like Secretary of State Hillary Clinton, disgraced Attorney General Eric Holder, Secretary of Health and Human Services Kathleen Sebelius, Secretary of Energy Steven Chu, and UN Ambassador Susan Rice.  They were among the top ten names on the list.  That was last year.  We can hardly wait for this years list to be released.  Judicial Watch is a public interest group that investigates and prosecutes government corruption.  See the entire list.
Let's see.  Right now, Americans are attempting to deal with a host of Obama administration scandals:  The NSA scandal, the IRS Scandal, the Navy Seal scandal, the Benghazi scandal,  and the Fast and Furious Scandal.
Then there is Obamacare.
Obama and his minions have trashed the constitution.  Mr. Obama claims to be a constitutional scholar, indeed, taught constitutional law in college.  Obama taught constitutional law at the University of Chicago Law School for twelve years!  Seems to me that with that sort of background he should know better!
In an article at Front Page Magazine, Arnold Ahlert says the following:  "Perhaps the most contemptible effort in that regard is President Obama’s transparently unconstitutional effort to suspend various parts of the Affordable Healthcare Act. How Americans feel about that piece of legislation is irrelevant. What’s relevant is that Congress passed the law, including the part that calls for its implementation beginning on Jan. 1, 2014, and the president signed it. There is no Constitutional way the president can simply choose to ignore sections of a law he doesn’t like, or go around Congress completely when they won’t kowtow to his agenda.

Yet that’s precisely what Obama and other administration officials have done. In 2012, the president unilaterally decreed that the same DREAM Act rejected by Congress 18 months earlier would be implemented for the children of illegal aliens. He also gutted part of the Welfare Reform Act of 1996, in clear violation of the statute. Obama is still ignoring a ruling by the 4th Circuit Court of Appeals and federal appeals courts in D.C. and Philadelphia, all of whom ruled his “recess” appointments to the National Labor Relations Board (NLRB) were unconstitutional." --  SOURCE:  Front Page Magazine   (We strongly recommend you read this article in its entirety.)
Let's cut to the chase. There is a serious shortage of intestinal fortitude in Congress today.  There is a palpable lack of guts within the ranks of the GOP in the House of Representatives.  A Bill of Impeachment ought to be introduced, voted on, and passed in the House ASAP.
Having said that, please understand that I am not so foolish as to believe that the US Senate, controlled by the President's own party The Democratic Party) , therefore by Obama, himself, will find him guilty.  But this administration's corruption needs to be documented, publicly, and made a part of the historical record of the country for future generations.  With the phalanx of protection the Mainstream Media has thrown up around their president, the ONLY way that will happen is -- through impeachment.
In the meantime, things in America are only going to get worse.
Every time Obama gets away with a violation of the constitution, it emboldens him, it becomes easier for him to so it again and again.  I am concerned Congress has already waited too long. I suspect many in Congress fear an uprising of civil unrest (riots) among the black population of the country should they impeach Obama.  Then so be it.  NOTHING should get in the way of doing the RIGHT thing.
Impeaching Obama IS the right thing to do. The rape of the constitution must be ended.
http://www.rightsidenews.com/2013123133678/editorial/us-opinion-and-editorial/obama-the-law-giver.html
Posted by theodore miraldi at 12:20 PM