Polygamy and the Left 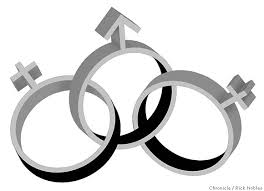 With the ruling of a federal judge last week that declared part of Utah's anti-polygamy law unconstitutional, the left finds itself torn. Of course, with their ever-wavering consciences that are willing to go along with whatever seems the latest fad that tests our moral boundaries (especially in the sexual realm), some liberals say that it is time that we take a closer look at plural marriage. After all, if consenting adults want to enter into such relationships, what is the problem? In other words, as I asked over five years ago, what's wrong with polygamy?
However, some liberals took comfort in the fact that the federal judge's ruling in the Utah case was somewhat limited in its scope. So don't worry, declares Jay Bookman of the AJC, (in spite of where the redefining of marriage will eventually lead us) judge Waddoups' ruling "does not in any way require government to recognize a polygamous marriage."
Haven't we heard something like this before? No need to amend the U.S. Constitution to define marriage as a union between one man and one woman; the Defense of Marriage Act (DOMA) is sufficient. For over a decade (and marriage has only been an electoral issue for little more than a decade), the vast majority of elected U.S. Democrats were for biblical marriage, until they were against it. In 1996 DOMA passed by a 342 to 67 margin in the U.S. House, and an 85 to 14 margin in the Senate, and was signed by President Clinton.
After DOMA, until 2003, only three U.S. states (AK, NE, NV) saw fit to amend their constitutions to limit the legal definition of marriage to a union of one man and one woman. And just as they now have with polygamy, the liberal courts struck. In Lawrence v. Texas, the U.S. Supreme Court in a 6 to 3 ruling (reversing itself from the 1986 Bowers v. Georgia) overturned the Texas anti-sodomy law and thus invalidated similar laws in the 12 states that still had them on their books.
Of course, as liberals now point out with polygamy, the Lawrence ruling in no way granted gays the legal right to marry, but it did give legal (and inevitably cultural) legitimization to homosexual activity. Then the liberal courts struck again, as they almost certainly will do (if they follow their own liberal logic) in the case of polygamy. Later in 2003, the state Supreme Court of Massachusetts ruled in favor of same-sex marriage.
These two events set in motion of a torrent of activity among U.S. states to amend their constitutions to define marriage as a union of one man and one woman. Conservatives and liberals alike rushed to declare their support for biblical marriage. In other words, in the late 1990s and early 2000s same-sex marriage did not poll well.
As Carl Cannon of Real Clear Politics (and a supporter of same-sex marriage) put it, "Although 'marry the person they love' is a talking point, it's also a noble sentiment. But 'fight like hell' is not what Barack Obama or his political party did on this issue. Quite the contrary: 'Headed for the hills' is a more apt description."
According to Cannon, as late as 2004, Bill Clinton himself (who earlier this year "bravely" announced that "It's time to overturn DOMA") privately urged then presidential candidate John Kerry to "outflank George W. Bush from the right on gay marriage." Once the polling changed, liberals in the Democratic party were very willing to "evolve" on the issue of same-sex marriage. In his op-ed in March of this year, President Clinton stated that DOMA was "discriminatory" and "should be overturned."
Those who support polygamy are simply following the same playbook used in pushing the homosexual agenda to obtain full legal recognition of same-sex marriage. First, get legal recognition of the behavior. Then use the rulings of the courts along with allies in the media to sway public opinion. Finally, use the courts again to further erode whatever elements of Christian morality that remain in the U.S. legal code.
But currently the left does face a quandary: on the one hand, their ever-evolving morality says that there really can't be anything wrong with polygamy, but on the other hand, the line for marriage must be drawn somewhere. Thus, since liberals really don't want to defend the inevitable myriad of consequences of a legal redefinition of marriage, and since polygamy doesn't yet poll well among Americans, and democrats don't yet want the political burden of supporting polygamy, right now at least, liberals are willing to "discriminate" when it comes to marriage.
Yes, whether they would admit it (and they almost never do), liberals do take moral stands and they do discriminate. All of us do. Yet, liberals (and even some confused conservatives) would have us believe that it's wrong to "legislate morality." CNN's Mark Goldfeder ignorantly concludes that in the light of the Lawrence ruling, morals based legislation is "unconstitutional."
In his dissent of Lawrence v. Texas, Justice Antonin Scalia wrote "State laws against bigamy, same-sex marriage, adult incest, prostitution, masturbation, adultery, fornication, bestiality, and obscenity are likewise sustainable only in light of... laws based on moral choices." Scalia later concluded that the Court had effectively decreed "the end of all morals legislation."
Maybe the "Court" has so decreed, but not the Constitution. And of course, by "morals" what Scalia and Goldfeder are both referring to are Christian morals. As I have often noted, all law is rooted in some morality. It is illogical, ignorant, and hypocritical for liberals to rail against laws that are rooted in Christian morality, all the while preaching a morality of their own making. Americans simply need to decide by whose morality we want to be governed.