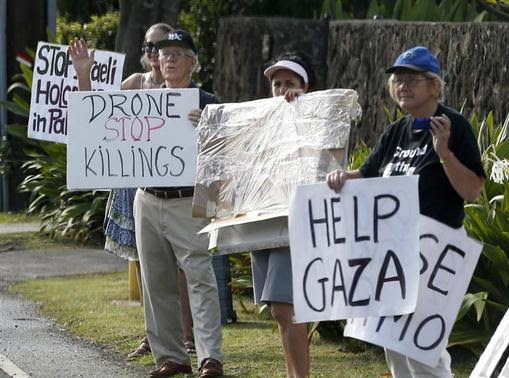 The serenity of President Barack Obama's Hawaiian vacation was rattled a little on Saturday when demonstrators aired grievances against unmanned aircraft and other issues in a small protest zone near the first family's upscale rented house.
Returning from an early morning gym visit at nearby Marine Corps Base Hawaii, Obama's motorcade passed a few dozen protesters holding signs with slogans including "Drones: Unethical and Illegal," "U.S. Bases Out" and "Close Guantanamo Now." Others expressed their opposition to genetically modified foods.
It marked a second day of peaceful protest surrounding Obama, who is spending a two-week vacation in Kailua with wife Michelle, daughters Malia and Sasha, the first lady's mother, Marian Robinson, and the family's Portuguese Water Dogs, Bo and Sunny.
On Friday evening, as many as 27 protesters turned out to demonstrate against the Trans-Pacific Partnership trade pact being negotiated between the United States and several Asian and South American countries.
Opponents of TPP say the agreement is being written to benefit large multinational corporations.
"Other than a friendly 'shaka sign' from the president as he drove by in his motorcade, we have not received a formal response from the White House," said Mike Hasselle of the MoveOn Honolulu Council, one of the organizers of the action.
Obama has received mostly a warm reception in and around Honolulu, where he was born and spent much of his boyhood.
Hundreds of onlookers swelled around his motorcade for about four blocks on Friday night after the Obama family dined at Nobu, an award-winning Japanese fusion restaurant, in Waikiki.
As the motorcade pulled away for the 15-mile (24-km) drive back to Kailua, the crowds clapped, cheered and waved, snapping photographs with their cellphones.
(Reporting by Ros Krasny, Suzanne Roig and Ikaika Hussey; Editing by Peter Cooney)
http://www.reuters.com/article/2013/12/28/us-usa-obama-protests-idUSBRE9BR09Q20131228?feedType=RSS&feedName=politicsNews&utm_source=dlvr.it&utm_medium=twitter&dlvrit=574655
Posted by theodore miraldi at 12:23 PM