Reid: Boehner will cave in on immigration 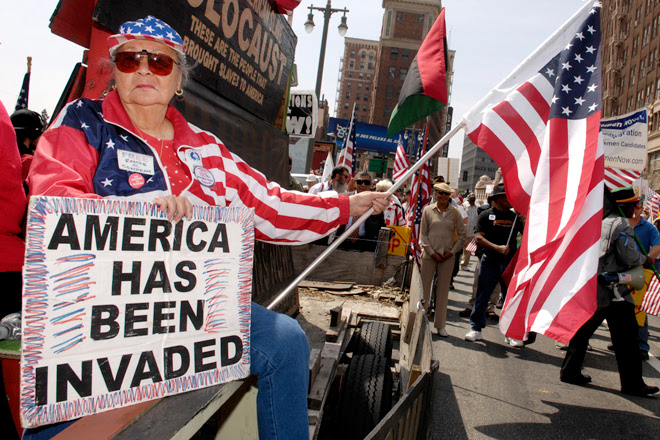 
The Democratic leader argued that Boehner has a new willingness to confront Tea Party groups and this, in turn, gives Reid confidence that he will not have to break up the Senate immigration bill to negotiate a series of piecemeal reforms with the House.
“I think that John Boehner will conference with the Senate. Why wouldn’t he? He’ll have a lot of pressure from his members now that the election is getting closer,” Reid said in an interview with The Hill.

“Some of his members are in very marginal districts where they need to do something on immigration,” he added.
Boehner has vowed he will not let the Senate bill, which spans more than 1,200 pages, reach the negotiating table. The most controversial element of the package is a provision granting a pathway to citizenship for millions of illegal immigrants.
“We have no intention of ever going to conference on the Senate bill,” Boehner told reporters last month.
A spokesman for Boehner said his boss is sticking to his strategy.
“The Speaker has been very clear that the House will only address immigration reform in a step-by-step common-sense manner,” said Boehner spokesman Michael Steel.
Boehner has been under pressure from conservative members of his conference not to pass even smaller pieces of immigration reform.
They fear being strategically outmaneuvered. Narrowly-tailored legislation on border security or work visas could be combined with the Senate’s comprehensive bill and then returned to the House floor for an up-or-down vote, they fear.
Rep. Steve King (R-Iowa), a Tea Party favorite, has organized a group of conservatives pledging to vote against any immigration reform bill to prevent Democrats from using it as a legislative vehicle to enact the pathway to citizenship.
Even Sen. Marco Rubio (R-Fla.), a co-sponsor of the Senate bill, has backed away from calls to go to conference with the comprehensive measure.
“At this point, the most realistic way to make progress on immigration would be through a series of individual bills,” Rubio spokesman Alex Conant said in October.
Reid, however, thinks Boehner will eventually take on King and conservative groups on the issue. Last week, Boehner slammed conservative groups for opposing a Senate-House budget deal that reduced the automatic cuts known as sequestration and trimmed the deficit by an additional $23 billion.
The Democratic leader admired the move.
“I was very impressed with his saying, as far as I’m concerned, what was long overdue. The government shutdown, it was being driven by these people he criticized,” Reid said.
“I think it’s a hopeful sign that that caucus is not going to be driven off a cliff as much as they were in the past,” he added.
Sen. Lindsey Graham (R-S.C.), a cosponsor of the Senate bill, said Friday that Boehner may be willing to discuss the Senate measure but only after the House has passed a series of bills addressing the same issues.
“I’m looking for them piece by piece to address each issue. I hope they do. If they do, then you’re in the ballgame,” he said.
Boehner’s decision to hire Rebecca Tallent as his new director of immigration policy has encouraged proponents of comprehensive reform.
Tallent previously served as a senior aide to Sen. John McCain (R-Ariz.), the lead co-author of the Senate bill.
The Speaker recently told members of the Texas business community that he would move immigration reform after the filing deadlines for next year’s Republican primaries, according to a Texas GOP strategist.
He wants to shield members of his conference from Tea Party-backed challenges if the House forges ahead on the controversial issue.
Quorum Report, a blog that covers Texas politics, reported earlier this month on Boehner’s conversations with Texas business interests.
Rep. Tom Cole (R-Okla.), a Boehner ally, told The Hill the House could move immigration legislation by next summer, depending on how the battle over the debt limit and other issues shape the start of 2014.
Cole said Boehner has made it “abundantly clear” that he wants to move several immigration bills.


Graham, who helped craft the Senate bill, said he was unsure whether Boehner planned to bring legislation creating a pathway to citizenship for illegal immigrants to the floor.
http://thehill.com/news/senate/193805-reid-boehner-will-deal-on-immigration
Posted by theodore miraldi at 11:58 AM