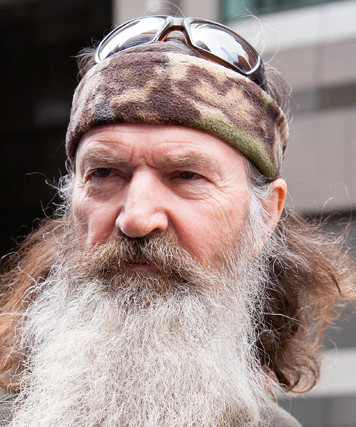 Phil Robertson of "Duck Dynasty"
Steamed that A&E so easily gave in to LGBT lobbyists and suspended the Duck Commander of “Duck Dynasty?”
Irritated that anyone who espouses traditional beliefs found in the Bible is so easily portrayed as bigoted and wrong?
Here’s your chance to sound off: Sign this petition and tell The Arts & Entertainment Network exactly what you think of its handling of the screeching that erupted when Phil Robertson simply stated what the Bible has taught for several thousand years: That sin is sin, God is God and people are not.
The petition calls on A&E, for which “Duck Dynasty” has been a gold mine for building viewership and support, to “immediately reinstate Phil Robertson and apologize to the millions of A&E patrons and supporters you have deeply offended.”
“You are not just firing some reality TV star; you’re spitting on the religious beliefs of the VAST MAJORITY of your viewers. While you have every right to support and promote the LGBT agenda, should that really include 1) persecuting a beloved American icon for expressing his sincerely held religious beliefs, and 2) losing your top show?”
Sign the petition here and WND will deliver it to A&E!
The petition even offers some gentle advice for the network: “Wise up.”
Robertson’s comments and A&E’s response of putting him on suspension from the far-and-away most popular show on cable television have flooded news reports over the last 48 hours.
After homosexual activists lobbied the network to suppress Robertson’s speech, A&E issued the following statement:
“We are extremely disappointed to have read Phil Robertson’s comments in GQ, which are based on his own personal beliefs and are not reflected in the series Duck Dynasty. His personal views in no way reflect those of A&E Networks, who have always been strong supporters and champions of the LGBT community. The network has placed Phil under hiatus from filming indefinitely.”
Robertson’s comments came in an interview with GQ magazine in which he championed biblical values and the battle against breaking God’s commandments.
“Everything is blurred on what’s right and what’s wrong. … Sin becomes fine. Start with homosexual behavior and just morph out from there. Bestiality, sleeping around with this woman and that woman and that woman and those men,” he said.
Paraphrasing a passage from the book of I Corinthians, he said: “Don’t be deceived. Neither the adulterers, the idolaters, the male prostitutes, the homosexual offenders, the greedy, the drunkards, the slanderers, the swindlers – they won’t inherit the kingdom of God. Don’t deceive yourself. It’s not right.
“We’re Bible-thumpers who just happened to end up on television,” he said of his family’s instant rise to fame. “You put in your article that the Robertson family really believes strongly that if the human race loved each other and they loved God, we would just be better off. We ought to just be repentant, turn to God, and let’s get on with it, and everything will turn around.”
But Phil, 67, also made it clear that he and his family will “never, ever judge someone on who’s going to heaven, hell.”
“That’s the Almighty’s job. We just love ‘em, give ‘em the good news about Jesus – whether they’re homosexuals, drunks, terrorists. We let God sort ‘em out later, you see what I’m saying?”
The Robertson Family issued an official statement Thursday evening on the Duck Commander website, saying they could not imagine the Duck Dynasty show continuing “without our patriarch at the helm.”
Their statement read:
We want to thank all of you for your prayers and support. The family has spent much time in prayer since learning of A&E’s decision.
We want you to know that first and foremost we are a family rooted in our faith in God and our belief that the Bible is His word. While some of Phil’s unfiltered comments to the reporter were coarse, his beliefs are grounded in the teachings of the Bible. Phil is a Godly man who follows what the Bible says are the greatest commandments: “Love the Lord your God with all your heart” and “Love your neighbor as yourself.”
Phil would never incite or encourage hate. We are disappointed that Phil has been placed on hiatus for expressing his faith, which is his constitutionally protected right.
We have had a successful working relationship with A&E but, as a family, we cannot imagine the show going forward without our patriarch at the helm. We are in discussions with A&E to see what that means for the future of Duck Dynasty.
Again, thank you for your continued support of our family.
The petition states:

Whereas, Phil Robertson, the star of A&E’s most popular show, “Duck Dynasty,” who was just fired, is one of the most popular Christians in America – a nation that is still overwhelmingly Christian;
Whereas, Robertson’s comments are totally in line with traditional biblical views of sex, marriage and family that are deeply held by 70-80 percent of Americans;
Whereas, by capitulating to LGBT lobbyists and hastily firing an enormously popular, high-profile Christian for expressing mainstream beliefs, you are denigrating and defaming the most cherished beliefs of the vast majority of “Duck Dynasty’s” viewers;
Whereas, if you do not relent on your decision, you will almost certainly lose your top-rated show;
Whereas, A&E has already, as Rush Limbaugh told his 20 million listeners, “thrown away the largest audience on cable television”;
Whereas, you have insulted and alienated the entire state of Louisiana by firing Robertson, with Gov. Bobby Jindal publicly condemning your action and describing Robertson and his family as “great citizens of the state of Louisiana”;
Whereas, your sympathy for LGBT concerns now appears to include the tactic of destroying any and all people and organizations that stand in the way of a forced acceptance of the LGBT lifestyle;
Whereas, media experts are already advising that Phil Robertson has a good case for a First Amendment lawsuit against A&E over violation of his religious liberties;
Whereas, even well-known gay writer Brandon Ambrosino condemns what A&E has done in Time magazine, writing: “Why is our go-to political strategy for beating our opponents to silence them? Why do we dismiss, rather than engage them?” Noting that most in Phil Robertson’s audience “probably share his views,” he says of the LGBT scorched-earth policy, “the Duck Dynasty fiasco says more about our bigotry than Phil’s.”
Whereas, you stand to lose a huge amount of money over this ill-conceived decision, when you consider that the “Boycott A&E” Facebook page received over 500,000 “likes” in just a few hours, and, as the IStandWithPhil.com petition warns: “There are 46 million faith-driven consumers in America today who spend 1.75 trillion dollars annually. Should you refuse to equally respect and welcome our legitimately held views, we will gladly stop watching this and all other A&E programming and turn to any reformulation of ‘Duck Dynasty’ on another network – while simultaneously supporting brands that stand with the show and the Robertson family”:

SIGN HERE  So get on with the apology and reinstatement, the petition tells A&E.
Support for Robertson already has come from former Alaska Gov. Sarah Palin; Louisiana Gov. Bobby Jindal; Sen. Ted Cruz, R-Texas; U.S. Rep. Stockman, R-Texas; the National Organization for Marriage and hundreds of thousands of those Americans who watch TV.
Even the words of President Ronald Reagan appear to apply to the arguments today. At a Dallas prayer breakfast in 1984, Reagan addressed the importance of religion in America.
“Those who created our country, the Founding Fathers and Mothers, understood that there is a divine order which transcends the human order,” he said. He cited the Mayflower Compact (“In the name of God”), the Declaration of Independence (“Nature’s God”) and the fact oaths of office are oaths “before God.”
“The state was tolerant of religious belief, expression and practice. … Society, too, was tolerant,” he said. Until the courts took prayer out of schools, and the attacks began.
“Those who are attacking religion claim they are doing it in the name of tolerance, freedom and open-mindedness. Question: Isn’t the real truth that they are intolerant of religion?”
A&E gave Robertson the boot Dec. 18 after learning of his remarks.
“The long knives are out for Phil Robertson,” noted talk-radio giant Rush Limbaugh. “The left is hysterical. Rather than just let it go … they’re making a huge, huge deal out of it. It’s outrageous. But his views … they line up almost exactly with the views of the new BFF (best friend forever) of the libs, the Catholic Church.”