Time for limits on powers of NSA cyber spies 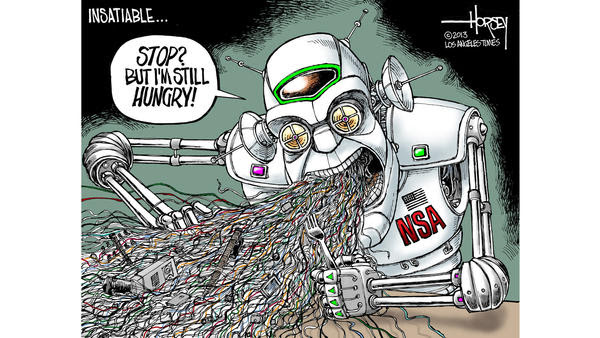 
For 12 years, America’s national security apparatus has grown like kudzu on steroids, but, finally, President Obama may soon start trimming it back to preserve at least a small space for personal privacy in the United States.
A panel of five independent experts appointed by the president has come up with 46 recommendations that would set limits on the broad authority of the National Security Agency to engage in cyber spying. The panel is suggesting enhanced oversight and new checks on such things as the NSA’s spy operations targeting foreign leaders and cyber attacks abroad.
The item on the panel’s list that has gotten the most attention is the recommendation to prohibit the NSA from hoarding data on every phone call placed by U.S. citizens. Instead, the information would stay with the telecommunications companies and could only be accessed by the government for a specific investigation authorized by a court order. Though it can be argued that no one’s privacy is really compromised since 99% of that information has never been looked at by any government agent, civil liberties advocates insist, nevertheless, that such sweeping intelligence gathering sets a dangerous, un-American precedent.
Even with the best intentions, it is the nature of government agencies to accumulate more power if they are unrestrained. This is especially true of America’s proliferating spy organizations because the claims of national security can trump all other considerations. Add to that the ever-expanding technological capability the NSA and other spy agencies have to peer into every dark corner of a person’s life, and there is the real potential for Uncle Sam to turn into Big Brother.
In a better world, all that intelligence-gathering capacity would not be utilized merely to chase down the occasional underwear bomber or jihadi with an explosives-packed rental truck. Christmas, for instance, would be a whole lot merrier if the NSA had the time to round up the Eastern European hackers who just stole detailed information from 40 million credit cards and debit cards used by Target customers.
There are plenty of bad guys. Maybe by narrowing the scope of our spying we can get the right wrongdoers in our sights