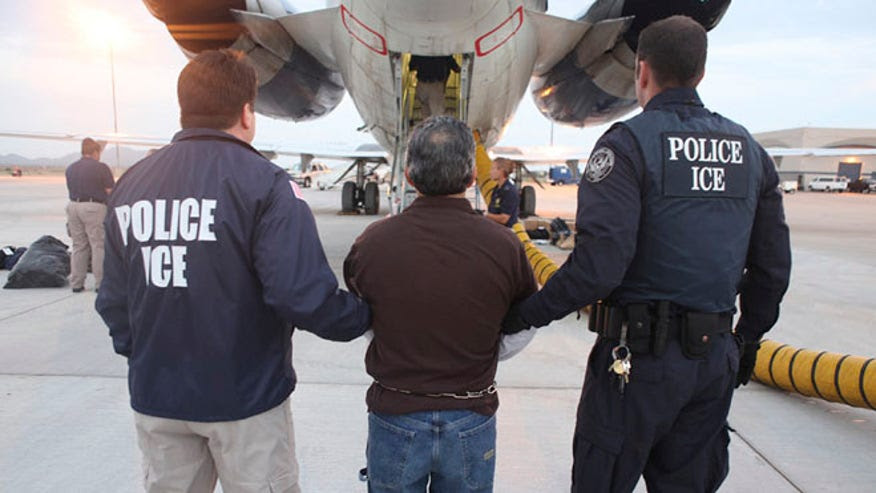 In this July 12, 2011 file photo, an illegal immigrant is transferred to an awaiting plane bound for Guatemala by U.S. Immigration and Customs Enforcement (ICE) officials in Mesa, Ariz.REUTERS

The head of the union representing thousands of federal immigration officers backed a federal judge's claim that the Department of Homeland Security is delivering children smuggled across the U.S.-Mexico border to their illegal immigrant parents.
"This is exactly what's happening," Chris Crane, head of the National ICE Council, told FoxNews.com.
Crane was reacting to a blistering court order from U.S. District Judge Andrew S. Hanen, which detailed the alleged policy. The Texas judge said the "dangerous" practice is effectively aiding human traffickers and particularly the drug cartels, which run many of these operations.
It remains unclear, though, which agency may ultimately be responsible and how widespread the practice is.
The Department of Homeland Security claimed in a statement to Fox News that it was following the law, and that its officers are committed to the "safe, fair and humane treatment" of minors.
But a law enforcement official claimed that in many cases, minors crossing the border are transferred to the Department of Health and Human Services. The official cited The Homeland Security Act of 2002, as well as the Trafficking Victims Protection Reauthorization Act, in describing how "unaccompanied alien children must be treated at entry including requiring formal removal proceedings and the need to quickly be transferred to the care of HHS."
The official described how only certain minors could be returned without going through that process.
However, the 2002 law cited by the official was the same one that Judge Hanen argued did not apply in these cases. The relevant section of that law refers to "unaccompanied alien" children who have no parent in the U.S.
The judge noted that the children in question were all accompanied by the person smuggling them over the border, and did have a parent in the U.S.
"There is nothing in this Act that directs and authorizes the DHS to turn a blind eye to criminal conduct," he wrote, adding the 2002 law "provides no excuse" for the practice.
Crane claimed that immigration officers are in fact shepherding children who cross the border illegally and delivering them to parents in the U.S., at least in some cases.
"That's what we do now, we babysit kids," he said.
He concurred with Hanen in arguing that, despite the humanitarian interest in connecting children with their parents in the U.S., the government could be putting more children in danger by inadvertently encouraging smuggling.
"The very people patting themselves on the back as humanitarians are putting these children at more risk than they've ever been before," he said.
The federal judge's statement last week was prompted by the case of Mirtha Veronica Nava-Martinez. She was arrested at the Texas-Mexico border in May and pleaded guilty to trying to smuggle a 10-year-old child originally from El Salvador. After the sentencing, the judge wrote, he decided to go public with additional details from the case.
He wrote that the "conspiracy" started when an illegal immigrant in Virginia hired smugglers to get her daughter from El Salvador to Virginia. She paid $6,000 in advance. But after the smuggling operation was interrupted by federal agents, he wrote, "the DHS delivered the child to her."
Further, he wrote, this was the fourth case he'd seen in as many weeks along these lines. In one case, he claimed, the U.S. government "flew a child to multiple locations" in the U.S. at the expense of U.S. taxpayers.
The administration, though, stresses that DHS is focused on "sensible, effective immigration enforcement" that prioritizes deporting "criminal aliens" and "egregious immigration law violators."
Immigration and Customs Enforcement announced Thursday that in fiscal 2013, the agency removed 368,644 people, most of whom were caught while or shortly after trying to enter the U.S. illegally. Nearly 60 percent had a criminal record.
Fox News' Jake Gibson contributed to this report.
http://www.foxnews.com/politics/2013/12/20/ice-union-head-backs-claim-that-govt-delivering-smuggled-kids-to-parents-in/
Posted by theodore miraldi at 5:17 PM