A GOP Immigration Plan to Satisfy No One

Little enforcement, no path to citizenship—

the Republican leadership's latest reform is a

loser on every level. 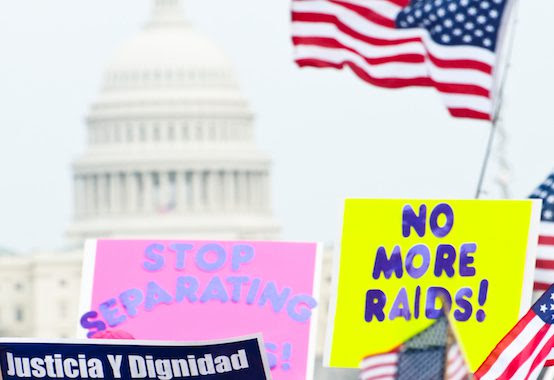 The House Republican retreat sounds like it is going to live up to its name.
“Comprehensive immigration reform” was once again moving through its normal life cycle: fawning coverage of leading amnesty supporters, bold predictions that legislative success was inevitable, dire warnings that House Republicans must capitulate or be doomed to permanent minority status—and then nothing.
That was the fate of the McCain-Kennedy bill and its imitators in both 2006 and 2007, when President George W. Bush teamed up with Democrats to overhaul immigration laws and admit more foreign workers.
Barack Obama promised to succeed where Bush failed. But there was no action on immigration when the Democrats held three-fifths majority in both houses of Congress. Afterwards, there was only limited executive action to legalize the subset of illegal immigrants who might have benefited from the DREAM Act, which once again stalled in the Senate.
Time and again, lopsided Senate votes have failed to move the House. Comprehensive reformers frequently end up divided amongst themselves, over crucial provisions like guest workers and the precise details of any path to citizenship for illegal immigrants.
The Gang of Eight collaboration seemed to have similarly fizzled. The urgency felt by Republicans after Mitt Romney’s poor showing among Hispanic voters has subsided.
So what are Republicans supposedly going to discuss at their House retreat this week? Ways to revive the legislative handiwork of Chuck Schumer and Luis Gutiérrez, naturally.
The New York Times reports: “Republican leaders are expected to release a one-page statement of immigration principles this week.” They hope for something more limited than what Obama and the Gang of Eight planned, perhaps border security and legalization of some undocumented children.
But not all of their ideas represent a shift from Democratic amnesty plans, as former New York City Mayor Michael Bloomberg’s apparent approval should signal. This includes a path to legalization, but not citizenship, for many of the 11 million illegal immigrants estimated to be in the country.
“The president’s pathway to citizenship is a stumbling block,” the Times quotes Maryland Republican Rep. Andy Harris as saying.  “But legalization with no path to citizenship can gain some votes.”
The reasons for this are transparently political: citizens vote and people living in various nebulous noncitizen categories don’t. That way Republicans can hope they can get credit for a softer immigration stand without adding to a Hispanic voting bloc that is majority Democratic.
It’s true that many illegal immigrants are less interested in citizenship than being able to live and work in the United States without fear of deportation. By some measures, beneficiaries of the 1986 amnesty had comparatively low rates of naturalization.
Nevertheless, this Republican ploy is too clever by half. The political benefits of supporting even a 1986-style amnesty with path to citizenship are debatable at best. Will Republicans really improve their standing among Hispanic voters by offering something less than a path to citizenship, especially when the Democrats are willing to give more?
Moreover, consider the consequences of creating a disproportionately Latino form of second-class citizenship. Increasing legal immigration and adding business-friendly guest-worker programs on top of that may be one way to address thelowest labor force participation rate since 1978—but not the best approach for American workers.
It’s a policy mix that’s likely to produce all of the problems associated with unchecked mass immigration plus a large-scale legalization program, while producing none of the presumed political benefits for the GOP.
Marco Rubio has already seen his 2016 political fortunes decline with the Gang of Eight’s fortunes. This gambit could implicate the rest of the party’s presidential field.
And all of this is happening when immigration legislation seemed dead, with the electorate focused on other issues.
Welcome to political strategizing courtesy of the people who brought you the McCain and Romney campaigns.
Might not there be other ways to modernize the GOP’s immigration posture while also taking into consideration the importance of assimilation and American employment? Republicans could make clearer that they are open to legalization, provided it is a last step following sensible enforcement measures that stop well short of mass deportations.
More creatively, they might trade a legal status for illegal immigrants who are already here for reductions in legal immigration. But are there any Republicans left on Capitol Hill who can eloquently make the case for the more moderate levels of immigration once championed by liberal Democrat Barbara Jordan?
In any event, a core principle and purpose of U.S. immigration policy should be creating new Americans—not a new caste system.
http://www.theamericanconservative.com/articles/a-gop-immigration-plan-to-satisfy-no-one/
Posted by theodore miraldi at 8:10 AM