'For the extremists in Planned Parenthood, those aren't people' 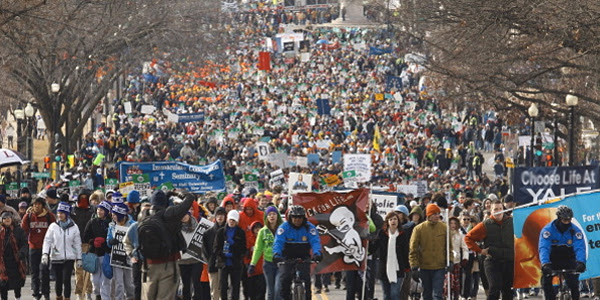 WASHINGTON – Dennis Byrne blogs at Chicago Now, and wrote recently about the state March for Life event, held in Chicago on Sunday in preparation for the national march looming Wednesday in Washington.

“America is missing at least 55 million people – that’s the estimated number of abortions performed in the United States since the historic Roe v. Wade and Doe v. Bolton decisions were handed down by the Supreme Court in 1973.
“Fifty-five million. That’s almost 20 percent of today’s population. Talk about genocide,” he wrote.
But that apparently doesn’t bother many, explained Byrne, a contributing op-ed columnist for the Chicago Tribune.
“For the extremists in Planned Parenthood, Illinois Personal PAC, ACLU and other absolutist outfits that support the idea that an unborn child can be killed for any reason (an idea made real by the combined Roe and Doe decisions), those 55 million aren’t people. They’re not even mourned for the loss of potential life.”
But he said it does matter: “I’ll be accused – again – of being heartless, of not caring about a woman who is forced to make a difficult choice. I’ll be told that if I don’t want an abortion then I should not get one. As if there is no one else involved in this matter of pure ‘Choice.’ Making the millions and millions of problems (not persons, mind you) disappear, as if they were never people who ever existed?
“Now that’s heartless.”
Chicago’s event on Sunday was but one of many preliminaries to Wednesday’s annual event in Washington, which is, as in years before, expected to draw pro-life activists by the hundreds of thousands.
Even with this year’s snowstorm that hit much of the Eastern Seaboard on Tuesday, events mostly were continuing, with adjustments where needed. Forecasts were predicting Washington could get up to eight inches of snow, with frigid temperatures and winds making the outdoors a challenge.
But exhibitor show spaces were sold out. The youth rally was sold out. The law conference was sold out.
Just in case anybody wondered, the website posted a notice, “The march will not be canceled due to inclement weather. Please dress appropriately by wearing many layers, and covering extremities!”
Minor adjustments were being made as the snow fell across Washington, with the 5K run/walk being delayed.
“We encourage you to visit your congressman to advocate for life upon completing the march. Even if the government is closed … marchers will still be able to visit the Congressional Office Buildings.”
The march rally is scheduled noon to 1 p.m. on the National Mall, with a variety of speakers, and the actual march will follow immediately, following the route up Constitution Avenue to the Supreme Court Building on Capitol Hill.
The event marks the 41st anniversary of the Supreme Court ruling that found in the U.S. Constitution the right to abortion throughout a pregnancy. Millions of Americans have marched over those four decades.
The Media Research Center announced it will produce a March For Life documentary, and it has agreed to review and possibly use video from those attending the week’s pro-life activities.
The decision to make the documentary came in response to what the organization called a “media blackout” of coverage of the massive event.
A year ago, the major networks spent only 17 seconds covering the more than half-a-million participants in the 40th Annual March for Life.
Despite the media blackout of the biggest pro-life march in America over the years, support for pro-life policies has been growing nationwide. A 2013 Gallup poll found that more Americans now identify as pro-life than pro-choice, with 48 percent identifying as pro-life compared to only 45 percent identifying as pro-choice.
Pro-life victories on a state level have been even more notable. Last July, the Texas Senate passed a controversial ban on abortions after 20 weeks. North Carolina passed a law requiring abortion providers to show women seeking abortions an ultrasound. However, the law was subsequently struck down.
Colorado has pending a legislative proposal that would make make abortion illegal in the state.
The annual march also now is surrounded by related events, with a panel discussion at Georgetown University called “Publicly Pro-Life: Why Abortion Isn’t a Private Issue” and several breakout sessions.
There’s also a prayer vigil at Planned Parenthood in Washington, that Youth Rally with Eric Scheidler of the Pro-Life Action League and Dr. Alveda King; Lila Rose of Live Action; Janet Morana, co-founder of the Silent No More Awareness Campaign; Troy Newman of Operation Rescue; and others.
There also on Wednesday is the Family Research Council hosting the ProlifeCon at its D.C. headquarters. Internet activists are invited to attend to hear from experts and legislators on new ways to use new media in the pro-life movement. More information is available from the FRC Web pages. The event will also be webcast for those unable to attend.
Confirmed speakers for ProLifeCon include former Republican Sen. Rick Santorum; Rep. Vicky Hartzler, R-Mo.; Rep. Andy Harris, R-Md.; the Duggar family, stars of TLC’s “19 Kids & Counting”; Tony Perkins, president of Family Research Council; and blogger Jill Stanek.
On Wednesday at 2 p.m. the Heritage Foundation will hold a screening of the documentary “40,” which presents abortion as “the greatest human rights issue of our time.” Space is limited. Information on the film is available at The40Film.com.
On Thursday, the Heritage Foundation will also hold the author event, “Abuse of Discretion: the Inside Story of Roe v. Wade,” at 12 p.m.
For a full list of March for Life related events taking place in and around D.C. this week, visit MarchForLife.org.
Read more at http://www.wnd.com/2014/01/abortions-toll-of-55-million-called-genocide/#iWmWvSsZxyCtsKD1.99
Posted by theodore miraldi at 11:47 AM