Former Secret Service agent Dan Bongino
F. MICHAEL MALOOF
WASHINGTON – A former US. Secret Service agent who guarded President Barack Obama believes the president isn’t pushing Russian President Vladimir Putin hard enough for a full security audit in the lead-up to the 2014 Winter Olympics in Sochi, Russia, given recent terrorist threats from North Caucasus Islamist militants.
In an exclusive interview with WND, Dan Bongino said Obama is afraid of “stepping into [a] bowl of Putin’s Cheerios” in not pressing him for such a security audit which he, as a Secret Service agent, said was undertaken when the president would travel, including to Russia.
“If the Russians object,” Bongino said, “that would be unacceptable. If it’s denied and something happens, it then is the responsibility of the Russians. If they accept, then it’s a win-win for the U.S. and the Russians.
“Obama should be requesting a full security audit, but isn’t,” Bongino said, adding that he would not attend the Olympics himself because of the security situation.
Some 15,000 Americans are expected to travel to Sochi.
Bongino said it’s a “joke” to send in two dozen agents from the Federal Bureau of Investigation when 10 times that many should be sent.
Bongino, a former candidate for the U.S. Senate from Maryland, recently published a book, “Life Inside the Bubble,” about his years as a Secret Service agent and why he walked away from it. It was published late last year by WND Books.
Bongino said when the Russians speak of an “iron ring” of some 30,000 security troops around the Olympics, that doesn’t necessarily ensure proper security.
The North Caucasus Islamist militants, who have threatened the Olympics, have been seeking to establish a Caucasus Emirate separate from Russia. They are in the neighboring North Caucasus Russian provinces of Ingushetia, Dagestan, North Ossetia, Kabardino-Balkaria and Karachay-Cherkessia.
Sochi is only 100 kilometers, or 62 miles, from these southern Russian provinces.
Adding to this concern is the prospect that battled-hardened Chechens and other north Caucasus Islamist militants who have gained fighting experience in Syria will descend on Russia to launch attacks.
The indication is that attacks would be launched in major Russian cities in an effort to draw security forces from the Olympic area, which then could be targeted, as promised by Dokku Umarov, leader of the militant Caucasus Emirates.
The Olympics are to be a showcase of Russia’s security capabilities. However, it could leave surrounding regions such as the North Caucasus and major Russian cities such as Moscow and St. Petersburg vulnerable to terrorist attacks.
“Militants from the Caucasus striking elsewhere in Russia during the Games to avoid the intense security that will be present in Sochi and to capitalize on news coverage of the highly publicized event pose the greatest threat,” according to a report by the open-intelligence group Stratfor. 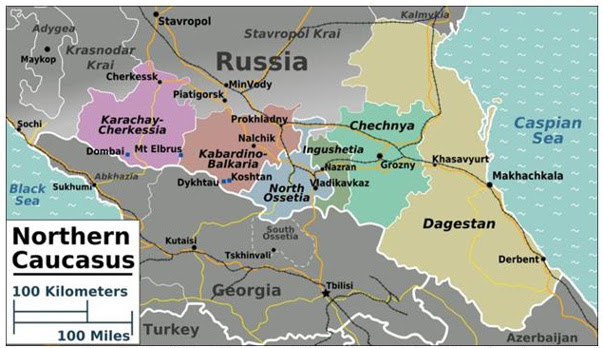 Over the past weekend, a mujahadeen group in Dagestan released a video showing two young men who later carried out two “martyrdom” attacks in Volgograd some 400 miles from Sochi, accompanied with the statement that the Olympics will not be safe.
It was released by the Subversive Group of Ansar al-Sunah, a branch of the Caucasus Emirate Mujahideen based in Dagestan, and was first published on the official website of the Mujahideen of the Province of Dagestan.
“Each region, each city, street, neighborhood – we fill your homes with blood!”a voice on the video attributed to the Caucasus Emirate leader Dokku Umarov said. “You started this war back in Chechnya during the 1980s and then Putin promised you victory, but what has he done?
“By the grace of Allah, this war became the cause for the spread of jihad throughout the Caucasus. And now we will spread it over the entire Russian territory!”
There already are indications that a Chechen “black widow” suicide bomber has penetrated the security ring around Sochi.
The “black widows” are women whose husbands, brothers or fathers have been killed in previous terrorist attacks.
There now is a security alert looking for Ruzanna Ibragimova, a widow of a militant who was killed in a shootout with police last year in Dagestan. 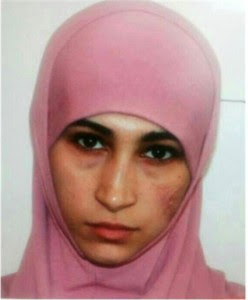 Ruzanna Ibragimova
The current security threat surrounding the upcoming Winter Olympics in Russia brings to mind the terrorist attack by Palestinians at the 1972 Summer Olympics in Munich in which 11 members of the Israeli Olympic team were taken hostage and later killed.
Bongino said there still is time for a memorandum of understanding to be arranged between the U.S. and the Russians to audit a “red cell” operation. He said that a test of 48 infiltrators had been run and that 25 had gotten through in Sochi.
He said Putin is just letting the FBI in to “pretend” he is undertaking counterterrorism cooperation, but is “putting the stick in the eye of Obama.” He said the problem isn’t limited to the Olympics but on a variety of policy issues such as Syria and Iran.
“Putin doesn’t want to be embarrassed,” Bongino said. “A full security audit would embarrass him. The ring of steel is a sign of desperation.”
He said that Putin is going to have to allow international observers, but doesn’t see him budging now, even though the Olympics are to begin on Feb. 7.
He sees Islamists particularly are targeting transportation networks, which appeared to be the case in past North Caucasus terrorist attacks with targets including the Moscow subway, buses, trains and at the Moscow international airport over the past three years.
Bongino said the transportation network offers “soft targets” because roads in and out of Sochi are not connected and it is difficult to get around. Alternative routes are limited, when they exist.
Based on separate reports that the British intend to send their elite Special Forces unit, Special Air Service, to accompany British athletes to Sochi, Bongino said U.S. special operations forces, FBI or even private military contractors should accompany U.S. athletes for protection.
“The catch will be the Russians allowing them to operate and carry weapons,” he said. Bongino said that he thought that such a request had been made to Russian officials but may have been turned down.
There also have been reports that the U.S. military and intelligence agencies were looking at ways to evacuate Americans from the Games in the event Russian security officials were not able to protect them.
Bongino said that unless there was a memorandum of understanding with the Russians, he said that it would be problematic for the U.S. to fly in military helicopters on an emergency basis from U.S. warships.
The Pentagon on Monday confirmed two U.S. warships are being dispatched to the Black Sea for possible extraction of U.S. citizens should there be terrorist attacks at the Olympics.
Read more at http://www.wnd.com/2014/01/ex-secret-service-putin-cant-safeguard-athletes/#uwJtHfRSr4IHOfAe.99
Posted by theodore miraldi at 9:28 AM