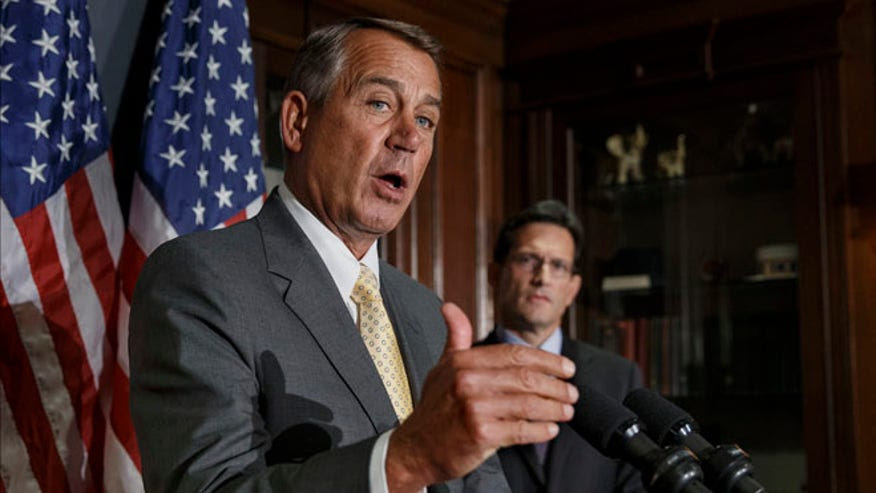 Jan. 28, 2014: House Speaker John Boehner, left, with House Majority Leader Eric Cantor, talks with reporters at Republican National Committee headquarters in Washington.AP
House Republican leaders on Thursday endorsed a limited path to legal status for some illegal immigrants, in a move Democrats said could open the door to a deal on comprehensive immigration legislation.
The position was included in a document released by party leaders during their annual retreat in Maryland. The "standards for immigration reform" documentruled out a special path to citizenship for illegal immigrants.
Instead, it said immigrants living here illegally could remain and live legally if they pass background checks, pay fines and back taxes, learn to speak English and understand U.S. civics, and can support themselves without access to welfare.
But GOP leaders made clear that border security must be improved first.
"None of this can happen before specific enforcement triggers have been implemented," the document said.
Nevertheless, Sen. Chuck Schumer, D-N.Y., a big advocate for immigration legislation on the Senate side, said the announcement could smooth the way for a deal on legislation. The Senate passed an immigration bill last year.
"While these standards are certainly not everything we would agree with, they leave a real possibility that Democrats and Republicans, in both the House and Senate, can in some way come together and pass immigration reform that both sides can accept. It is a long, hard road but the door is open," he said.
The House GOP document is sure to meet resistance from some rank-and-file members, and skeptical Republicans on the Senate side.
In advance of the House Republican retreat, Alabama Sen. Jeff Sessions, the top Republican on the Senate Budget Committee, delivered a 30-page memo to all House Republicans challenging their expected stance.
Sessions told members of his party they must "end the lawlessness -- not surrender to it" -- and they must defend the legitimate interests of millions of struggling American workers.
In his memo, Sessions warned of the negative impact of the House immigration proposal on U.S. workers, taxpayers and the rule of law. His analysis said increasing the number of immigrants would hurt an already weak economy, lower wages and increase unemployment. He cited White House adviser Gene Sperling's comment earlier this month that the economy has three people looking for every job opening.
House Speaker John Boehner, in remarks obtained by Fox News, told Republican members Thursday that the guidelines they announced "are as far as we are willing to go."
"I have been clear that I oppose the massive, flawed immigration reform bill passed by the Democratic-controlled Senate. I've been clear that the House will not take it up or engage in negotiations with the Senate on it," he said. "We will address this issue in a step-by-step, common sense fashion that starts with securing our nation's borders and enforcing our nation's laws."
He added: "Nancy Pelosi said yesterday that for her caucus, it is a special path to citizenship or nothing. If Democrats insist on that, then we are not going to get anywhere this year."
Among the other planks of the House GOP "standards" was a statement that, "We must secure our borders now and verify that they are secure."
It called for a "zero tolerance policy" for illegal border crossers "when immigration reform is enacted."
The document also backed improving the system used to verify the immigration status of workers, and said the legal immigration system needs to be overhauled.
"Every year thousands of foreign nationals pursue degrees at America's colleges and universities, particularly in high skilled fields," the document said. "When visas aren't available, we end up exporting this labor and ingenuity to other countries. Visa and green card allocations need to reflect the needs of employers and the desire for these exceptional individuals to help to grow our economy."
The document opened the door to a temporary worker program, and, significantly, threw support behind a DREAM Act-style program. The Obama administration has already, on its own, allowed young illegal immigrants who came to the U.S. as children to stay in the country for now -- which is what the DREAM Act would have addressed.
The GOP document backed that goal, for those who meet certain criteria and either serve in the military or get a college degree. "It is time to provide an opportunity for legal residence and citizenship for those who were brought to this country as children through no fault of their own," it said.
The document also made clear that "criminal aliens, gang members and sex offenders" would not be able to seek legal status at all.
The Associated Press contributed to this report.
http://www.foxnews.com/politics/2014/01/30/house-gop-leaders-back-limited-path-to-legal-status-for-illegal-immigrants/
Posted by theodore miraldi at 7:31 PM