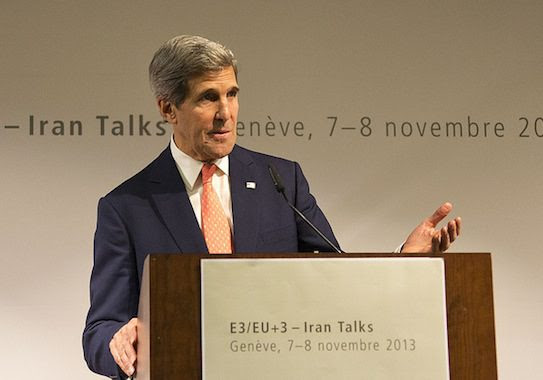 
Secret parallel negotiations with Iran that led up to the recent agreement over that nation’s nuclear program included an unusual and highly interactive role for the intelligence community. Normally the analysts provide a formal report on an issue or development, a report that is frequently codified into a National Intelligence Estimate, if there is time to do so, before going to policymakers. But barring receipt of new information that dramatically alters conclusions, which would be hand-delivered in timely updates, that is where the intelligence community role ends. There is good reason for the bureaucratic firewall as policy is distinct from intelligence and should not necessarily be driven by it, particularly as clandestinely obtained information is frequently speculative. The intelligence community historically prefers not be involved in policy, and most policymakers agree that mixing the two would be a bad idea.
But this was different. Negotiations in Oman under the aegis of Sultan Qaboos were backed up by an intelligence team working under the auspices of the National Security Council. An elaborate series of tabletop “war games” using competing teams representing the Iranians and Americans were set up to test the various options that were being floated by the Iranians and the counterproposals being put forward by American negotiators. For example, scenarios were tested and projections made based on Iranian capabilities for speeding up enrichment, the viability of using existing stores of enriched uranium for weapons purposes, and the effect on potential weaponization of permitting various enrichment levels. The U.S. negotiators were able to calibrate the extent to which limitations on Iranian enrichment would retard the possible development of a nuclear weapon, concluding that the goal would be to make weaponization a distant objective at best while simultaneously creating an inspections regime that would give ample warning of any deviation from the agreement. The U.S. intelligence teams, in line with their previous estimates of Iranian capabilities, demonstrated that Iran is at least five years away from a viable nuclear weapon and even farther away from a delivery system even if such programs were fully funded, supported politically, and not subject to sabotage. Any slowdown of enrichment activity through multilateral agreements coupled with more aggressive monitoring would push that timetable even further back.
The intelligence officers also noted, somewhat wryly, that a number of red herrings were being floated by the administration to make it appear that the Geneva negotiations were encountering problems, regularly describing the talks in public utterances as “difficult” in spite of the fact that there has been general agreement on nearly all points for several weeks. This was done, they believed, to preempt domestic opposition to a deal with Iran and to pacify critics in congress. The tactic worked, and it appears that it is being used again: witness press leaks suggesting that the administration is by no means confident that a final agreement can be reached in six months’ time. The analysts are convinced that the White House fully intends to achieve a permanent and comprehensive settlement, which it believes will defuse many other tensions in the region and will ultimately be good for Israel, Saudi Arabia, and the Gulf Emirates as well as for the United States.
http://www.theamericanconservative.com/articles/intel-community-makes-peace/
Posted by theodore miraldi at 10:28 AM