Scientist: 'These shenanigans have been going on for decades'


An independent data analyst whose work has been published by Principia Scientific, where scientists deliberate and debate, throwing out predetermined political results in favor of the truth in the data, says the global warming activists are at it again.
They’re manipulating the data.
In this case, lowering the historical temperatures for years prior to 2000. Which makes the temperatures after that look like they’ve risen. Which makes it look like global warming.
“A newly uncovered and monumental calculating error in official U.S. government climate data shows beyond doubt that climate scientists unjustifiably added a whopping one degree of phantom warming to the official ‘raw’ temperature record,” the report says.
It comes from the discovery by independent data analyst Steven Goddard, who did a study of the official U.S. temperature records used by NASA, the National Oceanographic and Atmospheric Administration and others.
He found that for the records, when global temperatures plummeted in 1999, on the official U.S. chart, they didn’t.
Essentially, he said, the charge was revised downward by one degree for readings before 2000. But they “left post-2000 temperatures more or less intact.”
“Does this evidence prove an intentional fraud? Goddard certainly thinks it possible,” the science site analysis explains, “and only a full examination of all the files will show that, one way or the other. … The ramifications are that hundreds of billions of tax dollars have been misallocated to ‘solve’ a non-problem, all due to willful malfeasance and/or incompetence in data handling.”
The analysis continued, “Just last month (December 2013), John Beale, the senior EPA policy adviser, was convicted and jailed for defrauding taxpayers out of $1 million in salaries and expenses. Does a culture of corruption extend through departments associated with climate policy?”
“Climategate” exposes the global warming scam. Get it now at the WND Superstore.
At the CATO Institute, a separate report on 2013 temperatures noted, “Please be advised that this history has been repeatedly ‘revised’ to either make temperatures colder in the earlier years or warmer at the end. Not one ‘adjustment’ has the opposite effect, a clear contravention of logic and probability.”
Columnist Vox Day wrote at Absolute Rights that it’s just another “smoking gun in the fraud-filled field of ‘climate science.’”
“What Goddard has uncovered is that the U.S. temperature records are being massaged and manipulated by the National Oceanic and Atmospheric Administration in much the same way that the Bureau of Labor Statistics manipulates the unemployment rate,” he writes.
“For example, despite the fact that more Americans are out of work than ever before, the BLS has managed to reduce the unemployment rate to 6.7 percent by simply excluding millions of Americans from the labor force. So, even though the employment-population ratio has fallen from 64.7 percent to 58.6 percent, implying 18.9 million more Americans out of work in a country of 310 million people, the official unemployment rate is down from its 2009 highs,” he said.
“In the same way, NOAA has magically transformed a 90-year cooling tend into a 40-year warming trend by reversing the polarity of its V2 temperature adjustment. … In other words, NOAA artificially lowered temperatures from before the year 2000 by one degree, thereby making all post-2000 temperatures look that much hotter and producing the fictitious ‘warming trend’ that no one who ever goes outside has been able to detect,” he said.
Goddard’s findings, he wrote, included that “discontinuity” at 1998, because even though temperatures plummeted in 1999-2000, “they didn’t in the U.S. graph.” 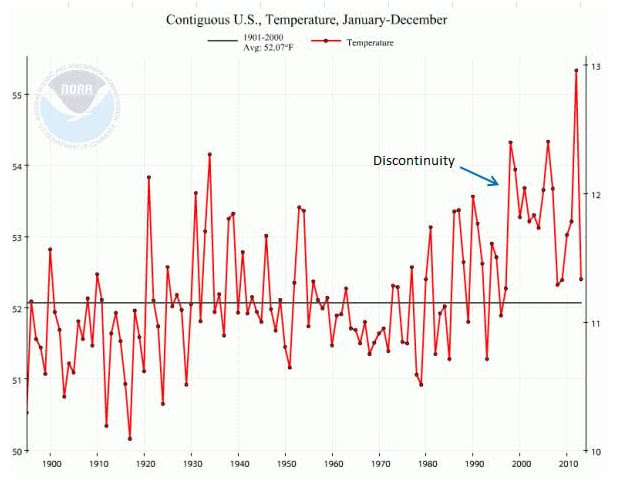