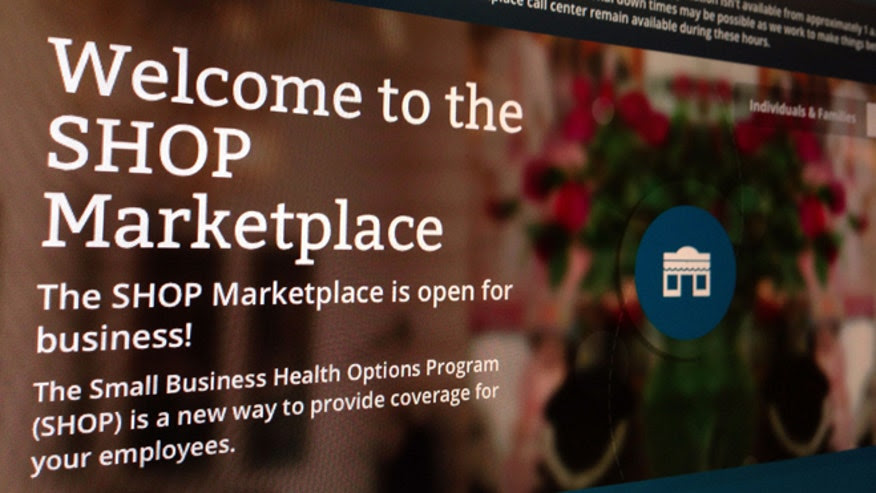 Nov. 27, 2013: This file photo of part of the HealthCare.gov website page featuring information about the SHOP Marketplace is photographed in Washington.AP
The Obama administration is reportedly delaying enforcement of another aspect of ObamaCare, one that prohibits employers from providing better health benefits to top executives than those being offered to regular employees.
According to The New York Times, tax officials said they would not enforce the provision in 2014 as they had not yet issued the appropriate regulations.
The Affordable Care Act, commonly known as ObamaCare, says employer-sponsored health plans must not discriminate “in favor of highly compensated individuals” with respect to either eligibility or benefits, and provides a tax break for employer-sponsored insurance, while demanding employers not provide better coverage to higher-paid employees.
Yet Bruce I. Friedland, a spokesman for the I.R.S., told the New York Times that employers would not have to comply until the agency issued regulations or other guidance.
Under ObamaCare, an employer that has a fully insured health plan that discriminates in favor of high-paid executives could face a steep penalty: a tax of $100 a day for each individual affected negatively.
Among the issues holding up the implementation of regulations, according to the Times, are how to measure the value of employee health benefits, how to define "highly compensated" and what exactly constitutes discrimination against less-paid employees.
As a result, the Times reports, officials have decided to review the existing nondiscrimination rules for self-insured companies, even as they try to write new rules for employers that buy commercial health insurance.
“Under the Affordable Care Act, for the first time all group health plans will be prohibited from offering coverage only to their highest paid employees. The Departments of HHS, Labor and the Treasury are working on rules that will implement this requirement of the ACA, taking into account public comments that were previously requested,” Erin Donar, a spokesperson for the Treasury told Fox News in a statement Saturday evening.
“As we continue this work, employers still have the same incentives they always have had to offer coverage to their employees as part of a competitive compensation package, and will have additional incentives under the Affordable Care Act starting this year and next.”
The enforcement delay is the latest in a list of deadline extensions and exemptions to the controversial law by the Obama administration to minimize disruption from the new health care law, which is sure to play in key role in this year’s midterm elections.
http://www.foxnews.com/politics/2014/01/19/white-house-reportedly-delays-obamacare-equal-coverage-provision/
Posted by theodore miraldi at 10:03 AM