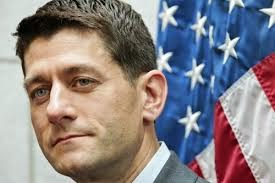 
Wisconsin Rep. Paul Ryan has joined the long list of Republicans who say President Obama’s selective enforcement of federal laws makes it difficult for Republicans to negotiate a high-stakes immigration deal.
“The challenge with all of this is we have a hard time trusting this president in enforcing the laws,” he told a friendly audience of business executives

gathered by the Hispanic Chamber of Commerce in San Antonio, Texas.
“Look what he’s doing on health care and all these extra-legal things he’s doing with executive orders and executive actions that we don’t believe he has the authority to do,” Ryan said.
But Ryan insisted the GOP leadership should be trusted to negotiate a deal that will work.
“We have to find a way to write these laws so that they are actually enforced. … I won’t get into all the details on how to do that, but we have strong opinions on how to do that,” he said.
Ryan’s criticism of the administration echoes recent statements from numerous other GOP leaders and legislators who say the president has made a habit of overstepping his legal authority.
“The president’s not allowed to write legislation, he’s not allowed to amend legislation, he’s not allowed to initiate war, and he’s not allowed to tell us when we’re in recess and when we’re not,” Sen. Rand Paul told CNN’s Candy Crowley Jan. 26.
The Senate’s GOP leadership voiced the same concern in their weekly address, delivered by Missouri Sen. Roy Blunt. “The administration has decided which parts of the [Obamacare] law to follow, and which parts to delay,” he said.
“The President himself was forced to take back his promise that people could keep their plan if they liked it [and] this isn’t the result of some website glitch,” he said Jan. 26.
Conservative members of the House

are also urging caution, partly because of Obama’s decision to not enforce immigration law.
“This administration will not abide by the law, even if we pass good strong legislation. … I don’t see how we can accomplish a workable form of immigration while this man is in office,” Louisiana Rep. John Fleming told The Daily Caller.
“The president has shown he’s not wiling to work with us on immigration,” said Rep. Raul Labrador, who quit a year-long secretive effort with Democrats to develop an immigration rewrite. “It is not worth having a party divided when we have so many issues we can come together on,” he told the New York Times Jan. 26.
In September, two other GOP congressmen who worked with Democrats on the secretive plan blasted Obama’s role.
“President Obama time and again has unilaterally disregarded the U.S. Constitution, the letter of the law and bypassed the Congress — the body most representative of the people — in order to advance his political agenda,” said a statement from the two Texas Republicans, John Carter and Sam Johnson.
“We will not tolerate it. Laws passed by Congress are not merely suggestions, regardless of the current atmosphere. … Laws are to be respected and followed by all — particularly by the Commander-in-Chief,” said the statement.
The GOP’s focus

on the president’s trust gap may provide a relatively easy exit from the leadership’s painful immigration problem.
The White House is using business

lobbyists to pressure Republicans into signing an immigration bill that could provide millions of new voters to Democrats, and millions of extra workers to business. However, many likely provisions are unpopular, especially among the GOP’s grassroots activists.
The Republican leadership could walk away from problem while telling industry that Obama can’t be trusted, said Roy Beck, director of NumbersUSA, a group that advocates for less immigration.
But, Beck said, “I don’t trust the Republican leadership” to reject business’ demands. Ryan has long supported immigration increases that would force Americans to compete for jobs against waves of low-wage foreigners, he said.
The GOP hasn’t supported reforms of the immigration system to help

Americans, he said, so “the lesson for Americans is that they shouldn’t trust any American politician on this issue.”
Only after the GOP passes laws that reduce immigration, and the courts have approved all new immigration enforcement rules, “can you trust the politicians,” Beck said.
“I don’t think his ‘can’t trust Obama’ shtick is designed to create an exit hatch,” said Mark Krikorian, the director of the Center for Immigration Studies, which argues for reduced immigration. Ryan “is too fanatically committed to open borders,” Krikorian said, adding that Ryan will accept fake commitments from Obama because he wants more foreign workers.
In San Antonio, Ryan didn’t offer any hints that the GOP leadership would pull back from its closed-door push for amnesty and increased guest-worker inflow.
“We are going to enter into a process … [and] it is going to have to have these security guarantees,” he said.
“In this era when we’re suspicious of the executive branch, we have what I sort of call the belt and suspenders approach so that we’re not going to winding up in the same [illegal immigration] problem 10, 15 years from now,” he said.
Ryan did not explain how the GOP could make future presidents enforce laws they don’t want to enforce.
The GOP leadership’s political problem is exacerbated by the president’s renewed promise to use agencies’ regulatory power to bypass GOP priorities in the months before the 2014 midterms.
“The president sees this as the year of action, to work with Congress where he can, and to bypass Congress where necessary,” White House

spokesman Jay Carney said Jan. 26 on ABC’s “This Week” show.
“If the President really intends to govern through executive fiat, he will incur a tremendous amount of resistance from both policymakers and the American people,” Arizona Republican Rep. David Schweikert told The Hill.
“I would remind the president he also has a Constitution and an oath of office that he took where he swore to faithfully execute the laws of our country,” House Speaker John Boehner said Jan. 16.
Obama “is 100 percent political,” said Fleming. “For him, amnesty is a way of establishing a permanent liberal regime in America [by] making it easier for Democrats to win

elections.”
“If you look at what this administration has done — from Obamacare to the Environmental Protection Agency to the [immigration enforcement], the rules and regulations and executive orders that he rolls out on the fly — it is quite clear that he ignores what is in the law and he does what he wants to do,” Fleming said.
Obama has already demonstrated his willingness to ignore laws that hinder his government-expanding agenda.
During the 2012 campaign, for example, Obama directed his deputies to stop enforcing immigration laws for younger illegal immigrants, most of whom are Latinos. He went on to win 71 percent of the Latino vote, and more than 500,000 illegal immigrants have now received permits to compete

for jobs against unemployed Americans and new high-school graduates.
His deputies also reduced enforcement of immigration laws by 10 percent in 2012. That year, the federal government deported only 0.2 percent of the roughly 12 million illegals living in the United States for violations of immigration law