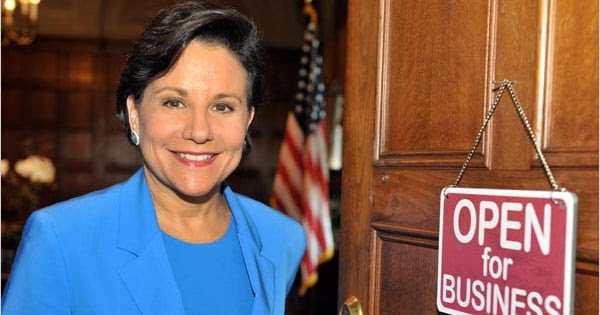 Commerce Secretary Penny Pritzker, who recently was named to a new presidential panel to review the government’s handling of “big data” stored at National Security Agency databases, has a history with investigating people.

That’s because she is a primary funder of the radical Media Matters for America activist group, which previously declared “war”on Fox News and reportedly sought to look into the personal lives of journalists.
In 2012, Media Matters found itself in hot water after the Daily Caller exposed the group’s purported illicit tactics, including compiling a de facto enemies list and reportedly seeking to investigate reporters and news personalities.
The Daily Caller reported it obtained internal memos from Media Matters that revealed the group employed an “opposition research team” to “target its political enemies.”
Reported the Daily Caller: “Included in the list of targets are right-leaning websites, conservative think tanks, prominent financiers and donors, and more than a dozen specific Fox News Channel and News Corporation employees.”
One memo reportedly stated Media Matters investigations “will focus on the backgrounds, connections, operations and political and financial activities of the individuals.”
The information came amid reports White House staffers held regular meetings and even a weekly conference call with Media Matters.
At the time, WND reported the Media Matters donor list included the Pritzker Family Foundation, which donated a total of $400,000 to the progressive attack group in 2007, 2008 and 2009. The family foundation is directed by Penny Pritzker.
Media Matters founder David Brock told Politico in 2011 he would engage in a campaign of “guerrilla warfare and sabotage” against Fox News.
In December, Media Matters Executive Vice President Angelo Carusone declared, “The war on Fox is over.”
He told the Huffington Post “it’s not just that it’s over, but it was very successful.”
“To a large extent, we won,’ he declared.
On Jan. 23, new White House counselor John Podesta announced a comprehensive review of the way that “big data” can affect “the way we live and work” and “the relationship between government and citizens.”
The panel will include Pritzker, Secretary of Energy Ernie Moniz, Obama science adviser John Holdren, economic adviser Gene Sperling and other senior government officials.
Podesta anticipated the panel’s conclusions will frame “the key questions that the collection, availability, and use of ‘big data’ raise – both for our government, and the nation as a whole.”
Pritzker served as the finance chairwoman of Obama’s 2008 presidential campaign
With additional research by Brenda J. Elliott.
Read more at http://www.wnd.com/2014/01/obamas-nsa-watchdog-funded-research-targeting-reporters/#w2B4H1db5hjWyfx9.99
Posted by theodore miraldi at 10:01 AM