The political ideology of State of the Union 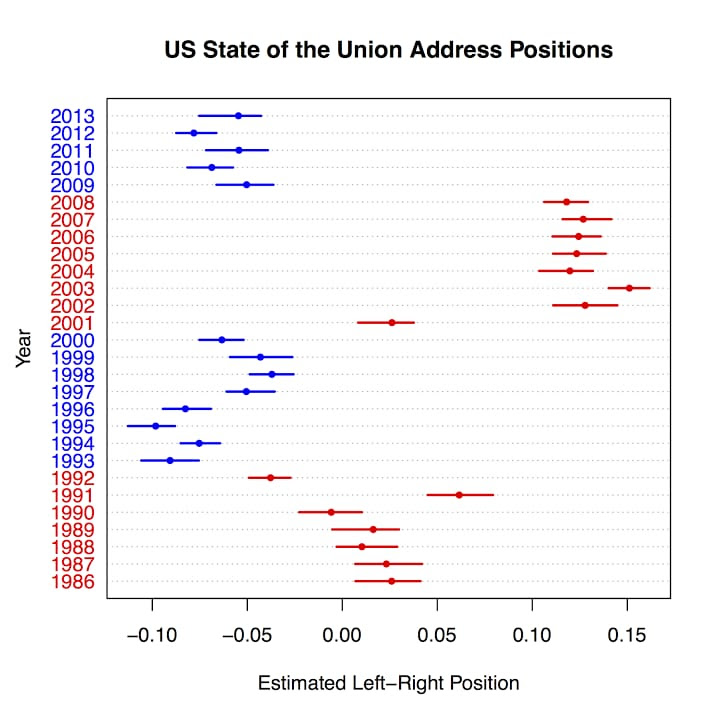 The graph above comes from political scientist Benjamin Lauderdale of the London School of Economics.  It estimates the relative ideology on a liberal-conservative scale of each State of the Union address since 1986.  Each address has a dot indicating its location on this scale, as well as a line that conveys the uncertainty underlying each estimate — somewhat akin to a margin of error.  We talked about the graph via e-mail.
Q: So how did you make this awesome graph?
A: Presidents with different political positions use different words at different rates in their speeches, and so we can get an indication of their positions by analyzing the words that they use more or less often. This graph shows the estimates from a model that distills variation in word use in these State of the Union addresses to a single left-right position that explains as much of that variation as possible. (The particular model I used is a variation on Wordfish. There is similar work on Latin American state of the union speeches by Christian Arnold, David Doyle, and Nina Wiesehomeier.)
Q: Can we really understand something as complex as ideology from just counting words?
A: This kind of model tends to lead to divergent reactions. Some people think “that is really cool, you didn’t even have to read the texts!” Other people think “that is really stupid, why don’t you just read the texts?” Setting aside this epistemological disagreement, there are a few things to keep in mind when interpreting the results.  The zero-point on the scale is arbitrary, and so the estimated locations are only meaningful relative to one another. As usual in politics, we have no idea where the political center is except by comparison to where the political left and right happen to be. The lines around the estimates give a visual sense of the uncertainty in the estimation. This means, for example, that there is little evidence that Obama’s positions have changed much from year to year.
Q: What do you think the graph can tell us?
A: This kind of quantitative text analysis does not always work well, but the results here make a lot of sense. Speeches by Democratic presidents (blue) are to the left; speeches by Republican Presidents (red) are to the right. We already knew this, but it gives some confidence that we can trust the more interesting patterns within each of the parties.
On the Democratic side, first-term Clinton is slightly further to the left than second-term Clinton or Obama, but mostly the Democrats are very consistent over time.
On the Republican side, there are two events that stand out. The 1991 State of the Union by George H.W. Bush — during the first Gulf War — is further to the right than any of the preceding speeches, or indeed than his election-year speech in 1992, which is the furthest left of any Republican speech. The first George W. Bush speech in 2001 is similar to the speeches given by George H.W. Bush and by Reagan, but after 9/11 his speeches are consistently much further to the right than previous Republican speeches.
Q: Can we expect an update after Obama’s State of the Union address tonight?
A: Absolutely.
http://www.washingtonpost.com/blogs/monkey-cage/wp/2014/01/28/the-political-ideology-of-state-of-the-union-addresses-in-1-graph/
Posted by theodore miraldi at 10:40 AM