Thoughts on the State of the Union 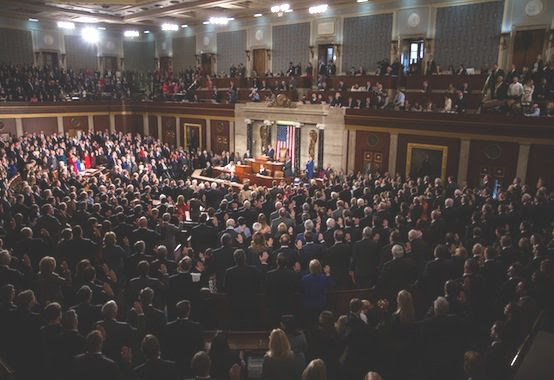 
Obama enthusiastically delivered a speech that conveyed very little that was newsworthy. The speech was predictably and understandably focused almost entirely on domestic affairs. Even when compared to last year’s address and the president’s Second Inaugural, foreign policy issues received very little attention, and there was nothing in these remarks that represented anything new or unexpected. Obama made some obligatory references to supporting democratic movements abroad, briefly mentioned the situation in Ukraine, claimed credit for the Syrian chemical weapons deal, and spent the rest of the foreign policy section on the war in Afghanistan, terrorism, and the deal with Iran.
The most significant and contentious part of the speech was Obama’s restatement of his threat to veto the new Iran sanctions bill, but took no time to elaborate on why the Kirk-Menendez bill is so harmful to diplomacy. Obama’s references to Syria will likely strike most attentive listeners as surreal, since he continued the administration’s bad habit of pretending that it is committed to achieving major goals in Syria when it clearly wants to avoid doing anything of the kind. That is a defensible policy, but the administration has to first acknowledge and then defend it. If we judged the extent of U.S. foreign policy commitments by what was mentioned in this speech, one could be forgiven for thinking that the U.S. has no involvement in East Asia. Another glaring but unsurprising omission was any reference to Egypt or its post-coup government. Then again, there is nothing in current Egypt policy that is worth highlighting, so there was every reason to ignore it.
The good news from the speech on foreign policy is that Obama still remains firmly opposed the new sanctions bill and remains committed to seeing negotiations with Iran through, but even here it didn’t tell us anything that we didn’t already assume to be true.
http://www.theamericanconservative.com/larison/thoughts-on-the-state-of-the-union/
Posted by theodore miraldi at 11:59 AM