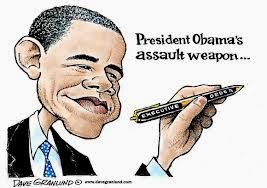 
A System of Divided Government

A Hallmark of the Obama Administration

For more information, check out: An Executive Unbound: The Obama Administration’s Unilateral Actions
http://www.heritage.org/research/factsheets/2014/02/top-10-abusive-executive-actions-by-the-obama-administration?utm_source=heritagefoundation&utm_medium=homepage&utm_campaign=headline140226
Posted by theodore miraldi at 12:58 PM