preferences out of California higher ed. Will 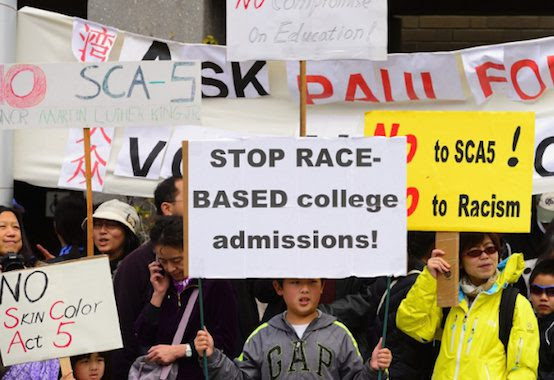 This month, California tried and failed to partially reinstate the affirmative action programs outlawed by Ward Connerly’s 1996 Proposition 209 ballot initiative. But it wasn’t “white backlash” or Republican intransigence that led to this unexpected result.
California lawmakers seemed poised to advance a constitutional amendment allowing the state’s universities to consider race in admissions. Senate Constitutional Amendment 5, which easily passed the Democratic-controlled Senate, would have exempted universities from Prop 209’s edict: “The state shall not discriminate against, or grant preferential treatment to, any individual or group on the basis of race, sex, color, ethnicity, or national origin.”
In the end, it was the Democrats—for the most part, the party that really matters in California state politics—who folded on SCA 5. And it was Chinese-Americans who were the pivotal group in the measure’s defeat.
Olivia Liao, president of the Joint Chinese University Alumni Association, was quoted in the local press describing the initiative as racist. “[Legislators] feel like the Chinese-American community isn’t paying attention to politics,” Liao said,according to the Pasadena Star News. “We are concerned citizens. We need to stand up when things are not right; we need to be heard. We shouldn’t have any [exceptions)] related to race. After all, America is a free country.”
The newspaper also quoted Marina Tse speaking out against SCA 5. “It has a negative impact on high-performing students and Chinese students,” Tse said. “We need to put merit and academic performance as a priority.”
These sound like familiar conservative arguments against racial preferences. But many of the organizations that worked against SCA 5 were anything but conventional conservative groups. The Chinese Consolidated Benevolent Association, the Southern California Council of Chinese Schools, and the Taiwan Benevolent Association are pretty distinguishable from Tea Party Express. The 80-20 Initiative—perhaps best known for getting late-night comedian Jimmy Kimmel to apologize for an anti-Chinese crack made on his show—straightforwardly advocates for more Asian-American representation.
In fact, 80-20 has complained that Asian Americans are underrepresented in corporate management positions, federal judgeships, and even Bill Clinton’s 1990s Cabinet that reputedly looked like America. While that makes them sound like affirmative action supporters, junking or weakening Proposition 209 could well reduce the Asian-American presence in California universities. About 38 percent of UC undergraduates are currently Asian Americans.
Three Asian-American Democratic state senators reconsidered their support for SCA 5 after receiving “thousands of calls and emails from fearful constituents who believe that any move to favor other ethnic groups could hurt Asian-Americans,” according to the San Jose Mercury-News.
“I’ve gotten calls from parents alleging there will be a quota system and that their kids will never be able to get into college, and that’s totally inaccurate,” complained SCA 5 author Ed Hernandez, a Democratic state senator. Hernandez has denied that his proposal represents affirmative action.
But the Democrats soon threw in the towel. “It really is driven most by my interest in making sure we come out with the best policy outcomes,” Assembly Speaker John Perez said of his decision to pull the plug on the measure. “And as it’s currently written I don’t think SCA 5 gives us that.”
SCA 5 does give us a glimpse of how politics can get more complicated than the “Rainbow Coalition” envisioned by Jesse Jackson and cobbled into national popular majorities by Barack Obama in two elections.
And this isn’t the first time we’ve seen this in California. When the state passed another controversial ballot initiative banning taxpayer monies to illegal immigrants, Proposition 187, 64 percent of whites voted in favor—as did 57 percent of Asians and 56 percent of blacks. A large majority of Latino voters was on the other side.
Other than Pete Wilson, who came from behind to win a second term as governor partly on the strength of the ideas ranging from Prop 187 and Prop 209, Republicans were unable to capitalize.
Who is to say they will forever be so inept? As recently as 1992, George H.W. Bush won 55 percent of the Asian vote—his second-best demographic behind white evangelical Christians—despite winning just 38 percent of the popular vote overall. (To put this in perspective, a Republican presidential candidate hasn’t won a majority of the black vote since 1932.)
Twenty years later, Mitt Romney lost the Asian vote by a bigger margin than the Hispanic vote. One plausible explanation is that on values issues, the educated and affluent Asian voter is closer to secular white liberals than those evangelical Christians.
Affirmative action may not be the issue that changes all that, but it’s an interesting case. Meanwhile, diversity may diversify the Democratic coalition in more ways than skin color.
http://www.theamericanconservative.com/articles/affirmative-actions-asian-american-watershed/
Posted by theodore miraldi at 3:00 PM