'Don't tread on me … or my Obamacare' facing ridicule 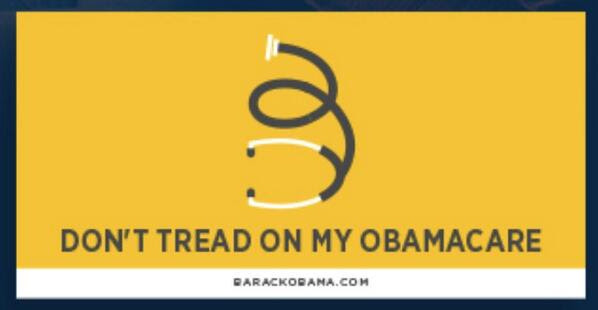 In a new question-and-answer posting at Reason.com, Editor in Chief Matt Welch has an answer for the question “What is the Gadsden ‘Don’t Tread on Me’ flag?”

It’s not, as it was in 1775, a “banner designed by Continental Col. Christopher Gadsden, using colonial rattlesnake imagery popularized by Benjamin Franklin, that accompanied the first-ever mission of the nascent U.S. Navy.”
Nor is it, as it was in 1991, the “song and album cover from Metallica.”
Nor, as law enforcement officials said in 1999, is it the “most common symbol displayed by militia members and organizations,” possibly suggesting “terrorist or criminal operations.”
Now, according to Christine Pelosi, a Democratic strategist and the daughter of the House minority leader, it is “a symbol to be re-appropriated in the service of defending the heavy-treading Affordable Care Act.”
“As ever, the richest symbolism is often in the eye of the beholder,” Welch observed.
He provided a link to Christine Pelosi’s Twitter feed, which was drawing starkly harsh condemnation of the federal move to control the health insurance market.
Pelosi tweeted:  “Don’t Tread on me … or my healthcare” with an image adapted from the Gadsden flag. The flag bore the words: “Don’t Tread on My Obamacare,” with a looped image of a stethoscope in place of the snake. 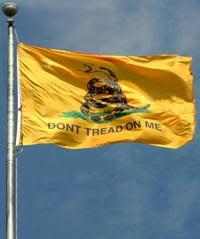 The actual Gadsden flag
However, the responses were not sympathetic to her cause.
Said S.M.: “Yes this is clearly what Gadsden had in mind when … defending an overbearing mandated government program against the people.”
Al Masino said: “Tell that to the 6 million who lost insurance.”
Timothy O’Donnell commented that “your healthcare can’t be tread on if you have none after your policy was canceled due to obamacare.”
Said Josh Jordan: “Millions said this as Obamacare got their plans canceled.”
Matt Verduci asked “what if your healthcare treads on … literally everyone else?”
Visit the WND SuperStore’s “Don’t Tread on Me” department, where the message of independence and self-reliance is on caps, flags, blankets and more.
Derek Hunter said: “I love being told how to live by children of privilege.”
Welch, at Reason, had pointed out that the “Don’t Tread” message was common at anti-Iraq War protests 10 years ago and among anti-tea party commentators five years ago, who said it was a historical indicator of “white resentment.”
Just last year in New Rochelle, N.Y., he noted, the mayor and city council decided it was so “offensive” that it must be removed from the local armory.
The tweet from Pelosi was among the latest moves to bolster the popularity of the struggling Democrat plan called the Affordable Care Act.
In a report in the Atlanta Blackstar, Nick Childs noted that today Democrats are “trying to run away from it and Republicans still blasting away at it.”
Republican Party Chairman Reince Priebus wrote: “For months, the news has not been kind. A broken promise, a broken website. Lost plans, lost doctors. Rising prices, rising frustration. Shrinking paychecks, a shrinking workforce. Unsecure date, insecure Democrats.”
The law was upheld at the Supreme Court, where justices had to redefine the penalty for noncompliance as a tax to make it compliant with the Constitution. But now it’s back at the high court, with its abortion mandate under fire now.
Former Rep. Bart Stupak, D-Mich., who provided the deciding vote for Obamacare even though he had objected to the plan to have taxpayers fund abortions, wants the justices now to strike it down.
He gave up his opposition, drawing scorn from pro-lifers as a traitor, when President Obama promised to issue an executive order separate from the law that would respect prohibitions on federal funding of abortion and freedom of conscience and religion.
Stupak recently wrote a commentary published by USA Today to support the Green and Hahn families, who are challenge the Obamacare abortifacient mandate.
“As a private citizen,” he wrote, “I’m proud to stand with the Green and Hahn families and their corporations, Hobby Lobby and Conestoga Wood, in seeking to uphold our most cherished beliefs that we, as American citizens, should not be required to relinquish our conscience and moral convictions in order to implement the Affordable Care Act.”
He said his objection is to the Obamacare mandate that forces businesses and their owners to cover “methods of contraception that may cause the abortion of new embryos: new human beings.”
The Hobby Lobby and Conestoga cases are just two among nearly 90 lawsuits pending over the Obamacare abortifacient mandate.
One of the most pointed cases was brought by the Little Sisters of the Poor, a group of Catholic nuns who run homes for the elderly in Denver and other locations.
The nuns have argued their faith prohibits them “from participating in the government’s program to distribute, subsidize, and promote the use of contraceptives, sterilization, or abortion-inducing drugs and devices.”
The government has persistently demanded that the Little Sisters “give up” their position on abortion, a brief filed with the 10th U.S. Circuit Court of Appeals in their case charges.
“The government has fought all the way to the Supreme Court, and continues to fight in this court, to force the Little Sisters to execute and deliver its mandatory contraceptive coverage form. … If the Little Sisters refuse, the government promises to impose severe financial penalties,” the brief notes.
Read more at http://www.wnd.com/2014/03/affordable-care-act-promoters-hijack-gadsden-flag/#FYW3HWsVjp8qrrll.99
Posted by theodore miraldi at 11:25 AM