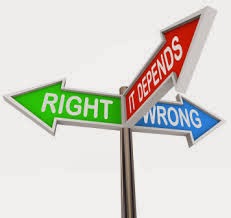 
In regard to widespread disdain for the Middle Ages, C. S. Lewis felt that many modern people suffer from a kind of “chronological snobbery” and that “the modern conception of Progress ... is simply a myth, supported by no evidence whatever.”  Certainly many minds smugly assume our world’s moral superiority to that of people in the past.  That assumption merits some close critical scrutiny.
This claim probably does not rest on an improvement in the numbers of deaths in war and genocide.  Many millions died in past atrocities such as the Mongol invasions of Asia and Europe and the Muslim conquests of India; similar shocking numbers fell victim to communism and fascism in the twentieth century.  If most modern abortions are equivalent to infanticides and abortion figures are also factored in, Wiker concludes in Moral Darwinism that we have still more “massive murder on a scale unheard of.”
Probably believers in modern moral superiority base their outlook mainly on the abolition of slavery and overt discrimination against people because of things like race in economically developed societies.  This overlooks some important historical facts about these accomplishments: slavery and discrimination have been universal phenomena throughout most of human history.  For example, in Japan until the middle of the twentieth century, poor families often sold their own daughters into lifelong prostitution to pay off debts.  In many instances such practices have been eliminated largely thanks to the influence of Christianity – a legacy of the past.  Moreover, slavery continues to thrive in some Muslim states like Sudan to this day.
We can mention other prominent ethical failings of modernity:
1. Modern moral thought is completely incoherent.  As one example, consider the strange spectacle of morally indignant people with no clear moral beliefs to be indignant about.  The progressive philosopher and mathematician Bertrand Russell denied that there is any such thing as an objective moral standard yet was a self-righteous moralist all his life, especially in the political sphere.  Similarly, OWS protesters professed postmodern moral relativism while stridently denouncing the avarice of the rich.  Surely this has to be considered mind-boggling moral incoherence.
There is also the disconnect between a materialistic, evolutionary worldview and common progressive moral judgments.  Watching a documentary about orangutans in the wild, I learned that orangutans have hierarchical relationships with clear-cut gender roles.  “Forced copulation” is a common feature in mating.  The human word for this is rape.  If, according to most progressive thinking, humans are only higher level primates, then why is such behavior not acceptable among humans, too?  There is no biological, evolutionary justification for branding rape as morally evil.  The same is true for many other moral strictures that modern people embrace along with holding to a materialistic, evolutionary worldview.  Evolutionary biology and materialistic cosmology provide no foundation whatever for ethical behavior.
Finally, we have the obvious clash between multiculturalism and progressivism.  If multiculturalism means anything, it must include esteem for traditional cultural norms.  However, progressivism in essence promotes throwing off the constraints of tradition to advance to a supposedly better world.  For instance, if a culture dictates that marriage must be only between members of the opposite sex and that same-sex marriage is impermissible, then one is obliged to respect that rule.  However, as we know very well, progressive sentiment will reject that cultural norm if same-sex marriage happens to be the moral issue of the moment.  Many modern people profess to embrace these two completely incompatible ideologies in respect to moral judgments.  In view of this blatant incoherence, it is amazing how self-righteous many modern people can also be about such issues.
2. This confusion in moral thinking leads inevitably to morally chaotic behavior. To take only one of many possible illustrations, contemporary people often have a noticeable lack of delicacy and real human sensitivity.  Despite the incessant talk about empathy and understanding, frequently we find little actual sensitivity on display among those who consider themselves morally advanced.  As one case in point, we can compare the world of Jane Austen’s novels, written two centuries ago, to that of modern novels and TV comedy.  Consider the gentle, refined humor of her characters on the one hand and then on the other hand the crude jibes of people like Jon Stewart and Bill Maher.  Or compare modern movies with those made just 60 years ago.  Some movie ratings sites tally the numbers of four-letter words, references to sex and scatology, and scenes with lurid violence in contemporary movies, and the results are often staggering.
Some might object that the dignified behavior of people in the past reflects only certain prosperous classes and not other strata of society.  However, as Theodore Dalrymple remarks, it is significant that the poorer people in those times tended to aspire to be like the more polite classes, while currently, in the U.K. and the U.S., many prosperous people aim at imitating the lower classes in the crudest aspects of speech and behavior. Decadence and boorishness are widely considered signs of sophistication, and children are also often encouraged to imitate the coarseness of their elders.  Even death is no longer considered a topic for circumspection.  After going to their graves, honorable people like Ronald Reagan continue to be targets for condemnation by academics and others.  Thousands of British leftists took to the streets to vent their hostility only days after the death of Margaret Thatcher.  Even if she had been a less remarkable leader, one would think that simple respect for the dead and their grieving families would inhibit such behavior.
So the notion of contemporary moral progress appears to be little more than a common conceit.  Commenting on the presentiments of C. S. Lewis about a future dominated by amoral technocrats, Herrick observes in The Magician’s Twin that “technology is advancing at an exponential rate while moral knowledge in the West is declining almost as precipitously.”  Half a century after Lewis’s death, it is even harder to disagree with him.
http://americanthinker.com/2014/03/are_modern_people_morally_advanced.html
Posted by theodore miraldi at 2:34 PM