Such a ruling by the Supreme Court in the Hobby Lobby contraceptives case could open the door to an array of new religious freedom claims. 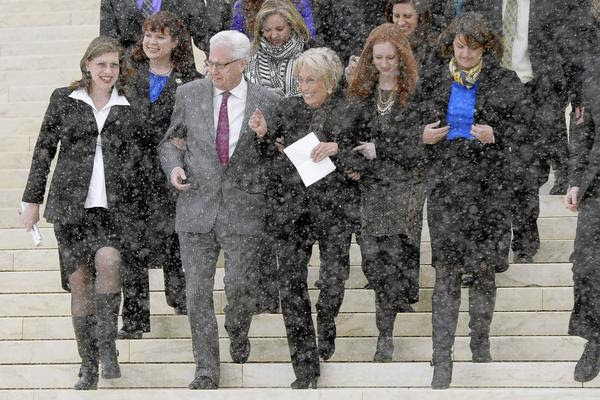 
WASHINGTON — The Supreme Court's conservative majority sounded poised Tuesday to deal a blow to President Obama's healthcare law and rule that business owners may invoke their religious beliefs to opt out of a new federal requirement that they pay for birth control for female employees.
Such a decision could open the door to an array of new religious freedom claims from those who object to other laws mandating such things as equal treatment for gays and lesbians or non-discrimination in hiring.
A decision is expected by late June.
Two years ago, the court stopped just short of striking down the Affordable Care Act as unconstitutional in a 5-4 vote. On Tuesday, the five conservative justices gave a sympathetic hearing to a pair of family-run businesses that refused to pay for contraceptives, such as so-called morning-after pills or intrauterine devices, despite a provision that all new health plans offer such coverage.
The owners, devout Christians, said they believe that such drugs and devices can effectively abort a fertilized egg and that the rule requiring them to pay for the coverage violates their religious beliefs.
The Obama administration described contraceptives as necessary preventive care for women and said its availability would help reduce unwanted pregnancies and abortions.
Sensing that the court's conservatives were leaning toward the business owners, U.S. Solicitor General Donald Verrilli Jr., who argued on behalf of the Obama administration, warned that such a ruling would set "a very dangerous principle" if the high court were to allow corporate owners to cite religious views as a basis for ignoring or avoiding federal laws governing the workplace.
Verrilli ran into sharp and skeptical questions from Chief Justice John G. Roberts Jr. and Justice Anthony M. Kennedy, whose votes will likely be crucial in the ruling.
A key moment came near the end of the argument when Kennedy and Roberts raised the issue of abortion.
"Under your view, a profit[-making] corporation could be forced in principle to pay for abortions," Kennedy said.
That is true in principle, Verrilli said, but he added that no law "requires for-profit corporations to pay for abortions."
Roberts sounded surprised. "I thought that's what we had before us," he said.
The exchange made clear that the administration faces an uphill fight. If Roberts and Kennedy decide to view the case as a test of whether the government can ignore a business owner's religious beliefs and force him to provide for abortions, the government would likely lose.
Justice Samuel A. Alito cited a law in Denmark that would prohibit kosher and halal slaughterhouses because of concerns for humane treatment of animals. If a similar law were passed in this country, shouldn't the owners be able to go to court to challenge it on religious freedom grounds? he asked.
Justices Antonin Scalia and Clarence Thomas, who voted to strike down the entire healthcare law in 2012, are seen as sure votes to limit its reach.
The three female justices, all liberals, sounded equally united in support of the administration.
Usually, the justices give lawyers a few minutes to present their argument, but that was not the case Tuesday. When Paul Clement of Washington, a former solicitor general, rose to speak for plaintiff Hobby Lobby, an arts and crafts chain, Justice Sonia Sotomayor cut him off before he finished his second sentence.
"Is your claim limited to sensitive materials like contraceptives, or does it include items like blood transfusions, vaccines … or products made of pork?" she asked.
She knew the answer, but she wanted to make clear that if Hobby Lobby wins, other employers could make an array of similar religious-liberty claims. A broad ruling could theoretically open the door for a Christian business owner to refuse service to gays and lesbians or a Muslim-owned business to turn away women deemed immodestly dressed.
"You would see religious objectors come out of the woodwork," Justice Elena Kagan said.
Justice Ruth Bader Ginsburg noted the case turns on the Religious Freedom Restoration Act of 1993. That law says that the government "shall not substantially burden a person's exercise of religion" without a very strong reason.
She said this was a non-controversial statement that had "overwhelming" support in Congress, but that no one thought it would be used to exempt for-profit corporations from complying with laws governing the workplace.
The two cases raising the issue before the court are Sebelius vs. Hobby Lobby Stores Inc. and Conestoga Wood Specialties Corp. vs. Sebelius.
At the same time, they will consider a pending appeal in the case of a New Mexico photographer who objected, based on free speech and religion, to take photos of a same-sex wedding.