G-7 expels Putin from a club

To which he no longer wants to belong! 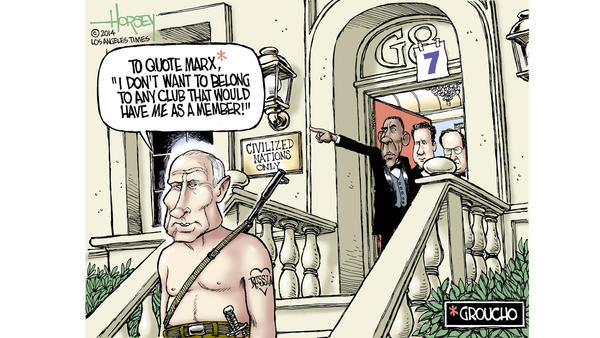 Vladimir Putin has been kicked out of an exclusive club, but he may not even care.
This week, meeting in The Hague, leaders from seven of the world’s biggest economic powers agreed to blackball Putin’s Russia, reducing the G-8 to the G-7. They ratified the decision to move the group’s upcoming annual world economic summit to Brussels, taking away from Putin the chance to host the event in Sochi, site of his recent successful Winter Olympic Games.
When the Group of Seven -- the United States, Germany, France, Britain, Japan, Italy and Canada -- chose to bring Russia into their fold in 1998, it was assumed the privileges of membership would encourage the Russians to continue on their bumpy path toward democracy and a free-market economy.
In the aftermath of the Soviet Union’s collapse, politicians, diplomats and academics in Europe and the U.S. had confidence a new world order was in place. Economic rivalries might continue, but brute force and grabs for territory would be aberrations from the norm, relics of a less evolved era. Among the great powers, at least, cooperation and collaboration would guide international relations and, as the eighth of the G-8, Russia would become just like the other seven.
Apparently, few people understood that though Russia could be brought into the club, the Russians might not be willing to follow house rules. Americans and Europeans assumed it would become obvious to everyone that there is really only one way to run a modern international system. To that, the Russians have finally said, “Nyet.”
They watched as the Baltic states and former Soviet satellites such as Poland, Bulgaria and Hungary were incorporated into the European Union and NATO. From the perspective of the West, that geopolitical development was a triumphant advancement toward a more free and peaceful world. From Moscow, however, it looked like humiliation and encirclement.
With longtime foes professing friendship but expanding their economic hegemony and military alliance to Russia’s borders, Russian nationalists have found it easy to exploit their country’s deep-rooted paranoia, a wariness planted by a long history of fighting off waves of invaders. And Putin, as the leading alarmist, has consolidated his power by assuming the role of the nation’s staunch, steely-eyed protector against these encroachments.
It should have been no shock that Ukraine’s lurch toward integration with Europe would be one step too far for Putin. Ukraine and Russia have been bound together for centuries. There is simply no way Putin would allow all of Ukraine to quietly slip away. If Crimea is all he takes back, the world -- and the Ukrainians -- will be lucky.
Sanctions will hurt him and expulsion from the power club will isolate him, but there are worse things for Putin. Being seen as a meek leader of a submissive nation -- that would be worse.
In Europe this week, President Obama insisted a new Cold War has not begun. “After all, unlike the Soviet Union, Russia leads no bloc of nations, no global ideology,” he said. Obama described Russia not as a superpower but as a “regional power” that, out of weakness, is threatening its neighbors. The world needs “a strong and responsible Russia,” the president said, and a Russian populace “proud of their own history.”
Actually, a strong Russian leader backed by a majority of his people “proud of their own history” is exactly why there is trouble in Crimea. Ukrainians want to escape from that history while Russians want to cling to past glories.
We can imagine all we want that the 21stcentury has brought us a changed international order, but, in many parts of the world, people are not interested in giving up the past. History, pride and tradition still rule vast regions of the planet. Russia happens to be one of them.

Posted by theodore miraldi at 10:36 AM