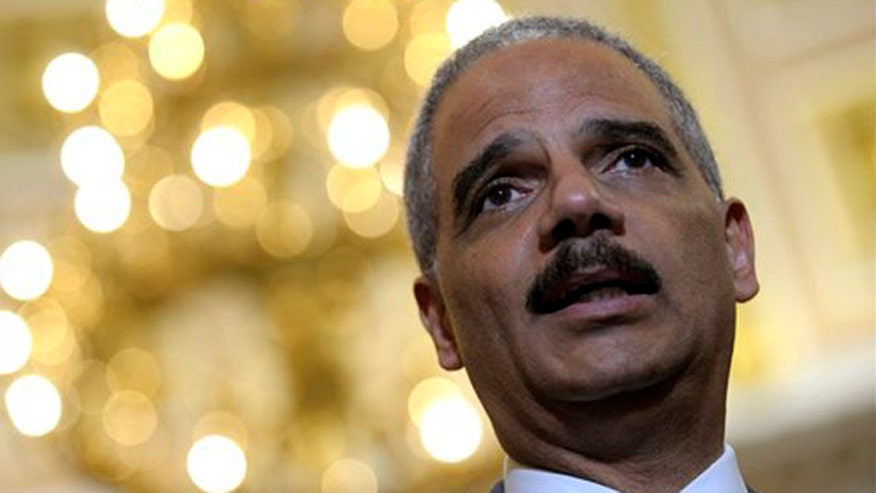 June 19, 2012: Attorney General Eric Holder on Capitol Hill in Washington.AP
Attorney General Eric Holder said Friday that the federal government will recognize about 300 same-sex marriages performed in Michigan before a federal appeals court halted them, despite a decision by Michigan's governor not to recognize those unions.
The decision means federal benefits will be extended to those couples -- including the ability to file taxes jointly, get Social Security benefits for spouses and request legal immigration status for partners.
"These families will be eligible for all relevant federal benefits on the same terms as other same-sex marriages," Holder said in a statement.
The announcement Friday morning is Holder's latest entry into the state-level same-sex marriage debate. Holder did the same thing in Utah, where more than 1,000 same-sex couples got married, before the Supreme Court put those unions on hold in January after a federal judge overturned the conservative state's same-sex marriage ban in December.
Earlier this month, U.S. District Judge Bernard Friedman struck down Michigan's gay marriage ban.
Four counties then took the extraordinary step of granting licenses on the Saturday before the 6th U.S. Circuit Court of Appeals ordered a temporary halt. The stay was extended indefinitely on Tuesday.
Michigan Gov. Rick Snyder afterward called the marriages performed last weekend legal but said Michigan won't recognize them.
Snyder, who is a Republican, acknowledged that same-sex couples "had a legal marriage." But because of the court's stay, he added, the gay marriage ban has been restored. The governor's move closed the door, at least for now, to certain state benefits reserved solely for married couples. The American Civil Liberties Union has said more than 1,000 Michigan laws are tied to marriage.
Holder cited Snyder's statement in his own on Friday.
"The Governor of Michigan has made clear that the marriages that took place on Saturday were lawful and valid when entered into, although Michigan will not extend state rights and benefits tied to these marriages pending further legal proceedings," he said. "For purposes of federal law, as I announced in January with respect to similarly situated same-sex couples in Utah, these Michigan couples will not be asked to wait for further resolution in the courts before they may seek federal benefits to which they are entitled."
Seventeen states and Washington, D.C., issue licenses for same-sex marriages. Since December, bans on gay marriage also have been overturned by courts in Texas, Oklahoma, Kentucky and Virginia, but appeals have put those cases on hold.
The Associated Press contributed to this report.
http://www.foxnews.com/politics/2014/03/28/holder-says-feds-will-recognize-michigan-same-sex-marriages-despite-governor/
Posted by theodore miraldi at 11:24 AM