Is Europe Cracking Up? 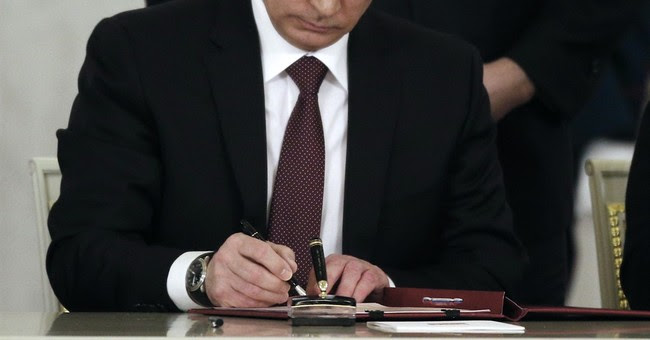 
A week ago, in the St. George's Hall in the Kremlin, Russia's elite cheered and wept as Vladimir Putin announced the re-annexation of Crimea. Seven in 10 Russians approve of Putin's rule.
In Crimea, the Russian majority has not ceased celebrating. The re-conquest nears completion. In Eastern Ukraine, Russians have now begun to agitate for annexation by Moscow.
Ukrainian nationalism, manifest in the anti-Russia coup in Kiev, has produced
its inevitable reaction among Russians.
While praising the Ukrainians who came out to Maidan to protest peacefully, Putin said that those behind the decisive events "resorted to terror, murder and riots. Nationalists, neo-Nazis, Russophobes and anti-Semites executed this coup." The Kremlin erupted in cheers.
But not only in Ukraine is ethnic nationalism surging.
"National Front Vote Stuns Hollande" was the headline on the Financial Times' story about France's municipal elections Sunday.
Though the FN of Marine Le Pen, daughter of party founder Jean Marie Le Pen, did not field candidate in many cities, it won the mayoral race outright in Henin-Beaumont and ran first or second in a dozen medium-sized cities, qualifying for run-off elections on March 30.
"The National Front has arrived as a major independent force -- a political force both at the national and local levels," declared Le Pen.
No one is arguing the point. Indeed, a measure of panic has set in for the socialist party of Francois Hollande, which is calling on all parties to unite against FN candidates.
In early polling for the May elections for the European Parliament in Strasbourg, the National Front is running close behind the UMP of ex-president Nicolas Sarkozy, and ahead of Hollande's socialists.
Begun as an anti-immigrant, anti-EU Party, the FN has broadened its base to issues like crime and unemployment.
But the most startling news on the nationalist front last week came in Venice and the Veneto region, where 89 percent of a large turnout in a non-binding referendum voted to secede from Italy and re-establish the Venetian republic that vanished in 1866.
Exulted Luca Zaia of the separatist Northern League, "The will for secession is growing very strong. We are only at the Big Bang of the movement -- but revolutions are born of hunger and we are now hungry. Venice can now escape."
The proposed "Repubblica Veneta" would embrace five million inhabitants of Veneto. Should it succeed in seceding, Lombardy and Trentino would likely follow, bringing about a partition of Italy. Sardinia is also reportedly looking for an exit.
In readying their referendum, Venetians journeyed to Scotland to observe preparations by the Scottish National Party for the vote this fall to sever the 1707 Act of Union with England.
Also observing in Scotland were representatives of Catalonia who will hold a similar referendum this fall on secession from Spain. Basque Country secessionists were present in Scotland as well.
In a report published this weekend, "Europe on Trial," a poll of 20,000 British commissioned by Lord Ashcroft of the Conservative Party found that Russia (before the Kiev-Crimea crisis) was viewed more favorably than either the EU or European Parliament.
By 49-31, British think the costs of membership in the EU outweigh the benefits and they are now evenly divided, 41-41, on whether to get out of the union altogether.
Prime Minister David Cameron has set a vote on EU membership for 2017. Now it appears the Labour Party, seeing the unpopularity of the EU, may also be open to changing the EU treaty and a referendum on saying goodbye to Europe, should they take power in 2015.
Why is the EU under rising centrifugal pressure? Why do so many nations of Europe seem on the verge of breaking up?
There is no single or simple explanation.
Venice and Northern Italy feel exploited. Why, they ask, should we subsidize a less industrious and lazier south that consumes tax revenues we raise here. Many northern Italians believe they have more in common with Swiss than Romans, Neapolitans or Sicilians.
Flanders feels the same about the Walloons in Belgium.
Scots and Catalans believe they are a people with a culture, history and identity separate from the nations to which they belong.
Across Europe, there is a fear that the ethnic character of their countries and continent are being altered forever against the will of the people.
Western Europeans are recoiling at the Bulgarians, Rumanians and gypsies arriving from Eastern Europe. Asylum seekers, economic refugees and migrants in the scores of thousands arrive annually on the Italian island of Lampedusa and in the Spanish Canaries.
Early this month, the New York Times reported a surge of 80,000 African migrants headed for the tiny Spanish enclaves of Ceuta and Melilla on the Moroccan coast.
The goal these desperate people seek: the mother countries of the Old Continent and the wealthy welfare states of Northern Europe.
What the children of Europe are rebelling against is what their fathers, paralyzed by political correctness, refused to prevent.
It was predictable, it was predicted, and it has come to pass.
http://townhall.com/columnists/patbuchanan/2014/03/25/is-europe-cracking-up-n1813861/page/full
Posted by theodore miraldi at 10:39 AM