Marching as to War 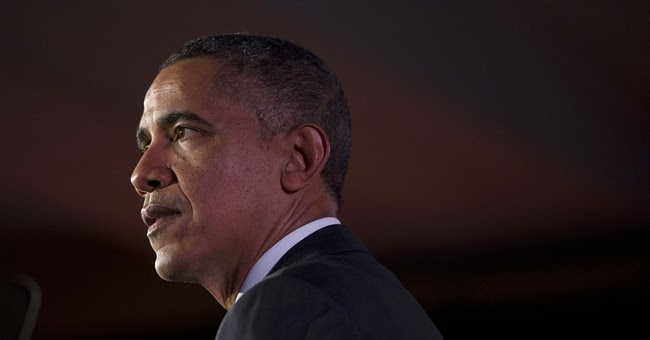 
Sweeping through Estonia, Latvia and Lithuania this week, Joe Biden reassured all three that the United States' commitment to Article Five of the NATO treaty remains "solemn" and "iron clad."
Article Five commits us to war if the territory of any of these tiny Baltic nations is violated by Russia.
From World War II to the end of the Cold War, all three were Soviet republics. All three were on the other side of the Yalta line agreed to by FDR, and on the other side of the NATO red line, the Elbe River in Germany.
No president would have dreamed of waging war with Russia over them. Now, under the new NATO, we must. Joe Biden was affirming war guarantees General Eisenhower would have regarded as insane.
Secretary of State John Kerry says that in the Ukraine crisis, "All options are on the table." John McCain wants to begin moving Ukraine into NATO, guaranteeing that any Russian move on the Russified east of Ukraine would mean war with the United States.
Forty members of Congress have written Kerry urging that Georgia, routed in a war it started with Russia over South Ossetia in 2008, be put on a path to membership in NATO.
Following Russia's annexation of Crimea, other voices are calling for expanding NATO to bring in Ukraine, Georgia and Moldova, and for moving U.S. troops and warplanes into Poland and the Baltic republics.
President Obama says, "All options are on the table" if Iran does not give us solid assurances she is not building a bomb. Members of Congress support U.S. military action against Iran, if Tehran does not surrender even the "capability" to build a bomb.
End all enrichment of uranium, or America attacks, they warn.
In the Far East we are committed to defend Japan if China seizes the Senkakus that Beijing claims as Chinese territory, a collection of rocks in the East China Sea. If Kim Jong-Un starts a war with South Korea, we are committed by treaty to fight a second Korean War.
We are committed by treaty to defend the Philippines. And if China acts on its claim to the southern islands of the South China Sea, and starts a shooting war with Manila's navy, we are likely in it.
Is this not an awful lot on Uncle Sam's plate?
Is America really prepared to fight all of these wars that we are obligated by treaty to fight?
The national recoil at attacking Syria, for crossing Obama's "red line" last summer and using poison gas, suggests that there is a vast gulf between what America is obligated by treaty to do, and what the American people are willing to do in sending their soldier sons into a new war.
Indeed, the latest mantra of the war hawks, "no boots on the ground," is meant to reassure the nation that in our next war, unlike Afghanistan and Iraq, there will be no more planeloads of dead coming into Dover, no new generation of Wounded Warriors arriving at Walter Reed.
Soon, the United States is going to have to come to terms with this reality -- the unwillingness of the American people to fight the wars they are committed to fight by the American government.
Yet, the immediate problem is how to avoid a military confrontation or clash with Vladimir Putin's Russia over Crimea, which almost no American wants.
Apparently, the West has decided to start down the sanctions road.
But where does that road lead?
While sanctions may cripple the Russian economy, will they break Putin? Did they break Castro? Did they break Kim Il Sung or Kim Jong Il? Did they break the Ayatollah? Does Putin look like someone who will respond to an economic squeeze by crying uncle?
Moreover, in this age of interdependence that America did so much to launch, sanctions are a two-edged sword.
If Ukraine cuts off oil, gas, water and electricity into a seceded Crimea, whose tourist trade is drying up, this could provoke Putin into invading Eastern Ukraine and seizing the lone land bridge onto the peninsula.
It could provoke Russia into cutting off imports from Ukraine, turning off the oil and gas, and calling in Ukraine's debts. This would precipitate a default by Ukraine, without more Western aid than the $35 billion it is now estimated Kiev will need by 2016.
Are House Republicans willing to vote America's share of that vast sum and make Ukraine a recipient of U.S. foreign aid roughly equal to what we provide annually to Israel and Egypt?
And if we severely sanction Russia, she could cut off oil and gas to Europe, cause a recession in the eurozone, and move closer to China.
Nixon's great achievement was to split China off from Moscow. President Reagan's great achievement was to preside over the conversion of the "evil empire" into a country where he was cheered in Red Square.
What our Greatest Generation presidents accomplished, our Baby Boomer presidents appear to have booted away.
http://townhall.com/columnists/patbuchanan/2014/03/21/marching-as-to-war-n1812631/page/full
Posted by theodore miraldi at 3:24 PM