Opposing Voter ID Laws in the Name of Race 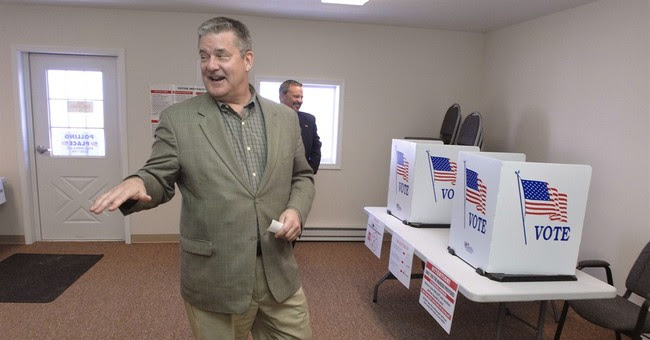 This is a headline we should never see in the United States: "Federal Judge: Yes, Arizona and Kansas Can Require Voters To Prove Their Citizenship."
The fact that this issue would be disputed at all is astonishing. That it is legally contested is stunning. That the prime mover in initiating the legal challenge is our own federal government, which has a compelling interest in ensuring the integrity of the election process, is mind-blowing. Who would have imagined just a few short years ago that in 2014 the executive branch of the federal government and a good chunk of its legislative branch would be dominated by radical community organizers wreaking havoc on the rule of law and our cherished principles of equal protection under the law and the impartial administration of justice? I feel like I'm living inside some Red-conspiracy fiction novel that could never get published because it's too unlikely to survive the incredulity even of readers with a generous willingness to suspend disbelief.
Both Kansas and Arizona passed new voter-ID legislation requiring new voters to provide a birth certificate, a passport or other documentation to prove their citizenship. But the U.S. Election Assistance Commission rejected requests from these two states for help in changing federal election registration forms. The existing federal registration form doesn't require proof of citizenship, only that new voters sign a statement declaring their citizenship.
How do you think the Internal Revenue Service would respond if we all said it would have to take our word for our income and expenses based on our "declarations" and we were not going to furnish 1099s, W2s or expense receipts?
What would the NSA say if all airline passengers simply refused to show their driver's licenses at airport security checkpoints?
Is the integrity of our elections so unimportant to President Obama, Attorney General Holder and the rest of the Democratic cabal that they refuse to impose the slightest checks against voter fraud?
Well, some horrendously naive people take these leftists at their word that they believe voter fraud is a "rare" phenomenon, even though 46 states have prosecuted cases of voter fraud since 2000. Do you think they don't know about the pernicious activities of ACORN, with which they were joined at the hip?
Some people also take Democrats at their word that they believe initiatives for voter-ID laws are being driven by "racist" conservatives who want to suppress minority turnout in elections. This, too, is maliciously twisted thinking, most likely born of liberal projection. Democrats need look no further than their own consistent efforts to suppress the military vote.
I know a lot of conservatives, and I've never met one who thinks this way. What we want is to make sure the election process is fair, that only people who are eligible to vote are allowed to vote and vote just once.
I wish more minorities would vote for Republican candidates, but neither I nor any other conservative or Republican I've ever met would support suppressing minority votes just because they vote disproportionately Democratic.
Guy Benson of Townhall reports that after Georgia implemented its voter-ID law in 2007, which was upheld in court, the state saw an increase in minority voter participation in the next two election cycles.
How could any intellectually honest person maintain that it is unfair, unreasonable or unconstitutional to require all voters to provide documentation to verify that they are who they say they are before being allowed to vote?
What you need to understand is that with this bunch of Democrats everything is about politics. For them, the end justifies any means, and their paramount end is to get Democrats elected, and so they will pursue it, even at the expense of the integrity of the system. This is undeniable given their opposition to voter-ID laws.
What other conclusion can we draw from their opposition than they want to increase Democratic votes with voters who abuse the election process?
Unless you have a very low opinion of minorities, how could you conceivably argue that it is racist to require that all voters prove their identity as a condition to voting? If anything racist is involved here, it is in the suggestion that minorities are too incompetent to furnish their IDs. How could you disrespect minorities any more that that?
If people can't muster their ID -- I don't care who they are -- then they don't deserve the privilege of voting, and people who want to protect their right to do so without ID are on their face suspect.
It is a crying shame that our federal government is run by partisan Democrats who are waging war against the integrity of the election process, the rule of law and the sovereignty of the several states. I pray more people wake up to this reality.
http://townhall.com/columnists/davidlimbaugh/2014/03/21/opposing-voter-id-laws-in-the-name-of-race-is-insulting-to-minorities-n1812141/page/full
Posted by theodore miraldi at 10:07 AM