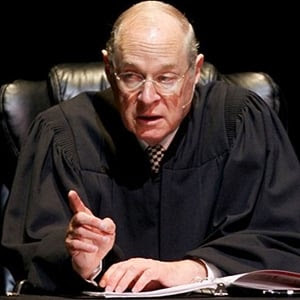 In a dramatic moment at the Supreme Court Tuesday, Solicitor General Donald Verrilli told justices that U.S. business owners have no religious freedom to reject government mandates forcing them to cover abortions.
Justices and lawyers also sparred over whether businesses actually have religious freedom and whether striking down the Obamacare mandate makes women second-class citizens.
The notable abortion exchange between Verrilli and Justice Anthony Kennedy came during oral arguments in Sebelius v. Hobby Lobby and Conestoga Wood Specialties v. Sebelius, two cases linked by the companies’ owners objecting to the Department of Health and Human Services requirement that businesses fully cover the contraception costs for their employees. That mandate includes coverage of abortafacient drugs, also known as the “morning-after pill.”
Family Research Council Senior Fellow for Legal Studies Cathy Ruse was in the gallery during oral arguments and said that was the most remarkable moment in the court session Tuesday.
“This was actually the most exciting part of the oral argument this morning, when Justice Kennedy asked the government’s lawyer, ‘So under your argument, corporations could be forced to pay for abortions, that there would be no religious claim against that on the part of the corporation. Is that right?’ And the government’s attorney said yes,” Ruse said.
“You could hear a pin drop, and I think that stunned Justice Kennedy. Since he’s always the swing vote, you want to stun him in a way that pushes him over to your side of the column,” she said.
Before the arguments reached that stage, a robust debate took place over whether businesses actually have religious freedom or whether those are only enjoyed by individuals. Ruse said she believes most of the justices are sympathetic to the companies and their owners on that question.
“Chief Justice Roberts raised the point that corporations can actually file racial discrimination claims. So he said if a corporation can have a race, why can’t it have a religious claim? The government’s attorney didn’t really have an answer for that,” Ruse said.
“I think a majority of justices believe that families who incorporate do not have to give up their religious freedom rights when they incorporate to do business,” she said.
The more liberal justices made two arguments in defense of the mandate.
First, they contend that striking down the mandate would allow employers to weed out any medical provision they want, leading to health-care chaos as every company would have their own plans. Hobby Lobby attorney Paul Clement rejected that fear, noting that every case filed under the Religious Freedom Restoration Act has to go to court, and not every claim will survive.
Second, Verrilli and the liberal justices posited women would essentially be second-class citizens if employers could single out contraception coverage for removal from their health plans.
“Paul Clement’s reaction was brilliant, so I’d like to adopt it as my own,” Ruse said. “If, in fact, the government has a compelling interest in providing free abortion-inducing drugs to all women in America – that’s their goal, and that’s what they’re doing with this – there are other ways to accomplish that goal without religious companies who have a religious objection to that.
“For instance, the government could simply provide insurance for these abortafacient drugs themselves. The government could do it through Title X clinics or another way. The government could provide subsidies or fund the providers of these items so that the women could get them for free from the provider, so he pointed out several ways the government could accomplish their goals without having to dragoon religious family based companies into doing something that violates their religion.”
While Ruse is “cautiously optimistic” about the court’s ruling, she does fear the liberal wing of the court will try to cobble together a majority that would just tell religious employers to drop their health coverage altogether and let their employees navigate the heath-care exchanges. A decision is expected in June.
Read more at http://www.wnd.com/2014/03/pin-drop-obama-lawyer-stuns-supreme-justice/#C0HqO8J30kSv1Zb8.99
Posted by theodore miraldi at 7:03 AM