Putin the Great vs. Obama the Weak 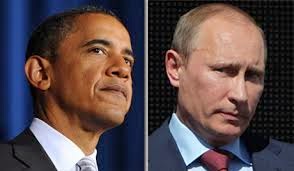 
As the Obama administration tries to tell the rest of us “All is well, remain calm, there is no new Cold War,” I’m wondering if Obama will try to overturn the Russian election in the Crimea with his phone and his pen.
Personally, I think it would be easier to do it with a United States army group and—who knows?—that may be what it comes to.
If you missed it, 99.999 percent of voters in the Crimea voted over the weekend to return to the warm embrace and sourdough breasts of the Great Patriotic Mother, Russia, eschewing the relative freedom of sovereignty within the Ukrainian federal system.
UN monitors said this was a free and fair election noting that Crimeans also voted for Kim Jong Un, the Ayatollah –any Ayatollah will do-- and Chairman Mao.
The Crimea has gone from freedom to FreeDoom overnight under the newest czarish majesty, Putin the Great.
But there is no new Cold War says the administration.
And if like your wars hot, you can keep them hot.
Because no less a figure than the head of the new state TV outlet recently reminded the whole world that because of 8,500 nuclear warheads more or less with Cyrillic stencils on them, Russia can do pretty much what it wants.
Russia, said Dmitry Kiselyov, is "the only country in the world capable of turning the USA into radioactive dust." This is the guy picked by the Kremlin-- and yeah Kremlin still means fortress in Russian-- to head state run media.
So, maybe Obama’s right. Maybe there will be no new cold war. Because the war Kiselyov described sounds pretty darn hot.
Any war that produces a half-life that lasts into the tens of thousands of days is decidedly not a cold one.
And if you like your doctor you can’t keep your doctor.
And guess what? Those same folks also promised this would be a time when “the planet would begin to heal.”
If we can't have our doctor can we at least have a corpsman?
I thought it was bad when we lost Afghanistan.
I thought it was bad when we lost most of North Africa.
I thought it was bad when we lost Egypt.
I thought it was bad when we lost Cyprus.
I thought it was bad when Syria crumbled.
I thought it was bad when Iraq started to teeter.
I thought it was bad when China started picking on Japan again.
I thought it was bad when Obama allowed Iranian centrifuges to start spinning again.
But now, it’s 3 am all over the world as an administration that telegraphed its weakness looks impotent, childish and incompetent.
Russia, the Great Patriotic Motherland under Putin the Great, starts to reassemble the pieces of their old evil empire. And Europe hangs in the balance.
And for America, it’s 3 am day after day.
http://finance.townhall.com/columnists/johnransom/2014/03/22/putin-the-great-vs-obama-the-weak-n1812864/page/full
Posted by theodore miraldi at 3:53 PM