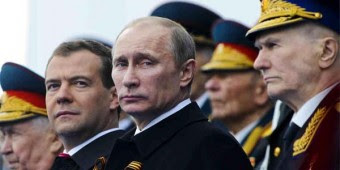 WASHINGTON – As the world remains riveted on Moscow’s annexation of the Crimean Peninsula, Russian President Vladimir Putin is shifting gears to Latin America.

As first outlined by Russian Defense Minister Sergei Shoigu last February, Putin now plans to keep the United States off-balance as Moscow sets up actual military bases and massive arms sales in the Latin American region.
Moscow’s plan follows a recent announcement by Iran to have its warships patrol in waters off the U.S. coast.
Russia and Iran have stated their increased presence is also in response to U.S. military deployments near their countries, including the eastward expansion of the North Atlantic Treaty Organization up to Russia’s borders.
The establishment of permanent Russian bases and a major Russian presence in the Western Hemisphere will challenge U.S. policies and threatens to diminish Washington’s influence in the region. At the same time, it will give Moscow a basis to stage offensive weapons in the Western Hemisphere, placing another formidable challenge to U.S. homeland defenses from potential missile threats.
WND previously has pointed out that the U.S. lacks adequate missile defenses in the Gulf of Mexico from any missile attack from the south. In addition, WND has reported Russia has begun deploying missile-bearing nuclear submarines in the Southern Hemisphere, further accentuating that threat.
Experts such as former Strategic Defense Initiative Director Ambassador Henry Cooper have argued because of this threat, the U.S. needs to deploy existing Aegis missile defense systems in the southern portion of the U.S.
Aegis missiles launched either from U.S. Navy ships or from shore are capable of intercepting orbiting nuclear weapons, but the resulting high-altitude explosion could also cause an electromagnetic pulse event.
An EMP attack, in turn, could knock out the vulnerable U.S. electrical grid system and other critical infrastructures that U.S. society depends. A catastrophic attack lasting months and years, furthermore, has to potential to kill up to 90 percent of the U.S. population through starvation and lack of medical assistance.
While published reports say Putin is looking to establish military bases in Cuba, Nicaragua and Venezuela, all of whom are close allies of Moscow, WND’s informed sources say the Russian president’s focus will be on Nicaragua, which is relatively politically and economically stable.
Putin is reportedly concerned with Venezuela’s instability, since it is going through serious economic problems, with demonstrations eroding the support of Venezuelan President Nicolas Maduro.
At the same time, Putin’s strategy eyes Venezuela, Cuba and Nicaragua – not only for navy port visits, but also for refueling Russian bombers at their air bases.
This potentially significant increase in Russian military presence in Latin America would give Moscow the ability to undertake combat missions not only in Latin America but also around North America itself.
Latin American publications already are reporting that the Obama administration is doing little or nothing to counter Russian, Iranian or even Chinese expansion in the region.
The Obama administration had announced the end of the Monroe Doctrine, a 19th century declaration that stated any efforts by European nations to colonize land or interfere with states in North or South America would be viewed as acts of aggression, requiring U.S. intervention.
Last November in a speech before the Organization of American States in Washington, U.S. Secretary of State John Kerry announced, “The era of the Monroe Doctrine is over. … The relationship that we seek and that we have worked hard to foster is not about a United States declaration about how and when it will intervene in the affairs of other American states.”
In referencing any threat from European powers, Kerry said, “We should consider any attempt on their part to extend their system to any portion of this hemisphere as dangerous to our peace and safety. With the existing colonies or dependencies of any European power we have not interfered and shall not interfere.”
Kerry’s declaration on behalf of the Obama administration, however, didn’t take into account U.S. adversaries setting up bases in the Western Hemisphere at the invitation of countries in the region.
Russian press reports justify Putin’s decision as power projection and improving its image abroad.
“Russia has started reviving its navy and strategic aviation since the mid-2000s, seeing them as a tool to project the Russian image abroad and to protect its national interests around the globe,” RIA Novosti said. “Now, Moscow needs to place such military assets in strategically important regions of the world to make them work effectively toward the goal of expanding Russia’s global influence.”
“Little doubt remains that Moscow believes that the region of Latin America can play a growing role in world affairs and has expanding mutual interests with Russia to check U.S. power,” asserts Russian expert Stephen Blank of the Washington-based Jamestown Foundation.
In terms of arms sales, Blank says Putin is looking to Brazil to buy fighter aircraft and surface-to-air missile systems.
“If successful, this would mark a step toward creating a group of industrialized countries that employ Russian designs and design bureaus for creating their own military hardware, thereby making the Russian defense sector more secure, pervasive and particularly significant in high tech areas,” Blank said.
Read more at http://www.wnd.com/2014/03/putin-to-put-russian-bases-in-latin-america/#H4rXpS6IoMa2pYx2.99
Posted by theodore miraldi at 9:47 PM