'RULES MEAN NOTHING' TO OBAMA 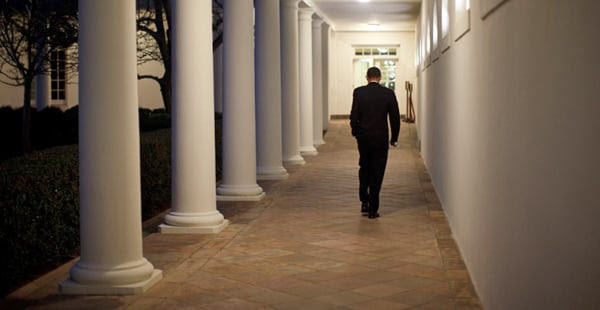 
Just days after Health and Human Services Secretary Kathleen Sebelius told Congress there would be no extension of the Obamacare enrollment deadline, the administration is offering an additional two weeks to anyone who begins the enrollment process by the end of the month.
“This is really one of the most audacious changes so far because several committees in Congress have been looking at all these delays and all these changes. Secretary Sebelius was asked point blank, ‘Will you extend the deadline past the March 31 enrollment date?’ And she said, ‘No, we will not,’” said Galen Institute President Grace-Marie Turner.
“In a separate hearing she said, ‘We don’t believe we have legal authority to do that.’ But that’s what they’ve done anyway. So they’re basically going before Congress that people have until March 31. Clearly, they’re not getting the enrollment they wanted. Therefore, they’re going to ask people, ‘Well, did you try to enroll? Did you have any trouble? If so, then we’ll extend the deadline for you. Rules mean nothing to this administration,” Turner said.
After initially stating that seven million sign-ups were needed, the administration has lowered the target goal to six million and stated that more than five million have signed up. However, neither Sebelius nor any other administration official will confirm how many Americans have actually paid their first month’s premiums. Sebelius said she doesn’t know because private insurance firms have that data. Turner isn’t buying it.
“I don’t believe that she doesn’t know. She hides behind the fact that they don’t have any way of knowing that. Part of it is because the website is still not built, as far as being able to allow people to pay. But I think if they knew and that were a big number, we would hear about it,” said Turner, who noted that House Republicans are now going directly to the insurance companies to determine how many enrollees have actually paid their premiums.
So will a short extension of the enrollment deadline to mid-April give the administration enough time to attract the number of people it needs to meet the target?
“I don’t think it’s going to make that big of a difference because most of the people who are uninsured, which is the whole reason we passed this all, are saying, ‘I don’t want this insurance. It’s too expensive, high deductibles, it’s too much of a hassle.’ So they’re not going to be insured, and I think that’s going to be a big problem for them,” said Turner, who added that the administration also refuses to disclose how many people are enrolling for the first time and how many are enrolling because they lost their existing coverage due to Obamacare.
Senate Majority Leader Harry Reid postulated Wednesday that many people are failing to sign up due to their lack of Internet savvy.
“There are some people who are not like my grandchildren who can handle everything so easily on the Internet, and these people need a little extra time,” Reid said. “We have a lot of people just like this through no fault of the Internet, but because people are not educated on how to use the Internet.”
Turner said, “That’s not quite as bad as calling the American people liars when they say that they’ve been harmed by Obamacare, but it shows how completely out of touch Democratic Senate Majority Leader Harry Reid is with the real world and what real people are dealing with in trying to figure out how to deal with these exchanges.”
She noted there are many other avenues by which people could sign up than through Healthcare.gov, but Americans just don’t like the product.
Read more at http://www.wnd.com/2014/03/rules-mean-nothing-to-obama/#hJBfg4kx1Bl6WQkr.99
Posted by theodore miraldi at 9:11 AM