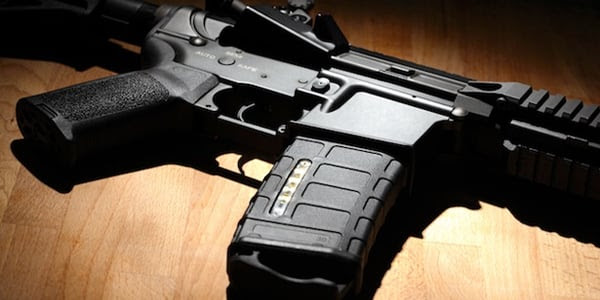 
Most Colorado sheriffs are refusing to enforce new gun-control laws they consider unenforceable, saying they will not treat every citizen like a felon and won’t change their plans even if a federal judge rules against them.
Fifty-five of Colorado’s 62 sheriffs are in agreement on refusing to enforce the law. Weld County Sheriff John Cooke said the new rules on magazine capacity and other issues make it impossible for authorities to make arrests even if they wanted to.
“They’ve turned law-abiding citizens into criminals,” Cooke said. “They banned magazines that hold more than 15 rounds and what they’ve said is that any magazine that can be readily converted to hold more than 15 rounds is illegal. Well, that’s 99.999 percent of all magazines. They have a base plate and a spring that you can remove to repair or clean. If you can do that, then that magazine is illegal to possess after Jan. 1, and you can’t buy any. How do we enforce that?
“There’s a grandfather clause in the law that says if you own a magazine before July 1, 2013, that’s more than 15 rounds, you’re allowed to keep it. How are my deputies going to know who bought that magazine before or after July 1? So we’re not putting any resources into it or making it a priority,” he said.
Given how easy it is to work around the 15-round magazine limit, does Cooke believe lawmakers are looking for a de facto ban on magazines, or that they just have no idea what they’re talking about?
“They don’t understand how it works because the legislator that introduced this bill, she didn’t come to the sheriffs and say, ‘Explain to me what a magazine is,’ because she didn’t even know. Then after the bill gets passed she was confronted on how a magazine could be converted, and she said, ‘Oh, people will just have to live with it,’” Cooke said.
He said gun-control advocates at the federal level are no more knowledgeable on the issue, and he cited Rep. Diana DeGette, D-Colo., as a prime example.
“At a debate that we had here last year, she was talking about how these 30-round magazines, once people are done shooting, they’re no good anymore because you just throw them away. She has no clue about what a gun is or a magazine is, and yet she’s trying to outlaw them federally,” Cooke said.
The enforcement battle is now headed to federal court, thanks to a suit filed by the sheriffs on behalf of law enforcement and the public.
“Most law-enforcement agencies in this state don’t really understand how to enforce this, and the people don’t know how to comply with this. So we actually filed a lawsuit. Fifty-five out of the 62 elected sheriffs filed a lawsuit in federal district court against these laws because we’re saying it violates people’s due process. If somebody doesn’t know that they’re violating the law, how can they be held accountable? And that’s a violation of due process,” he said.
The sheriff said his attorney is confident of a win in court, but Cooke insisted he isn’t planning to change anything if the verdict goes against him.
“Even the federal courts can’t make me enforce the laws. So if we lose and the judge says, ‘No, these laws are constitutional,’ I still set the priorities and the resources for my agency. There’s no law in the state of Colorado that says I have to enforce the law, so I still won’t enforce them because in my belief and my opinion, it’s not my job to turn law-abiding gun owners into criminals,” Cooke said.
From Columbine to the Aurora movie theater shooting, Colorado has seen more than its share of tragedies, but Cooke said gun-control groups are learning the wrong lessons.
“They’re addressing the wrong issue. It’s the gun that’s being used, but that’s an inanimate object. The problem is not the guns; it’s the hearts of man, and that’s where the issue is,” said Cooke, who advocated a collaborative approach to making sure the mentally ill don’t get access to guns.
Sheriff Cooke also rejects the argument that gun use is best left to law-enforcement professionals like him.
“An armed society is a polite society. If you ask a majority of cops on the street, they’ll you the way to reduce the number of victims of these mass shootings is to have a well-armed public that can shoot back and kill these people and neutralize them before they kill too many,” he said.
Cooke said an armed society was a great help to him and other sheriffs who invoked posse comitatus just months ago to maintain order while officials dealt with devastating floods.
“We had a lot of floods and fires this year, and the sheriffs said we need an armed populous to help guard their communities and their neighbors,” he said. “They could be a benefit to us to stop looting and to stop any riots or that sort of thing.”
http://www.wnd.com/2014/03/sheriff-feds-cant-make-me-enforce-gun-control/
Posted by theodore miraldi at 7:25 PM