The fate of a New Mexico photographer who was invited to help a lesbian duo “celebrate” a “commitment ceremony” in a state that did not recognize same-sex marriage remains pending at the U.S. Supreme Court, which is expected to act on the request for a review as early as this week.

The case is one of several in which small-business owners have been forced to sanction homosexual relationships in violation of religious beliefs, including in Colorado and Washington.
The Alliance Defending Freedom, which is representing Elane Photography owners Jonathan and Elaine Huguenin in the New Mexico case, said the fact that the justices took no action today means that, under the Supreme Court’s rules, they are actively considering the case.
The court likely will consider the case again Friday, said Jordan Lorence, an ADF senior counsel.
“We hope that the justices will take the case and rule that the government cannot force people to express ideas they do not support,” he said.
In 2006, Elaine Huguenin received an email from a woman, Vanessa Willock, asking if she would be “open to helping us celebrate our day,” a “commitment ceremony” between her and her same-sex partner.
When Huguenin politely declined because the ceremony was at odds with her beliefs, ADF said, Willock found another photographer, for less money.
Nevertheless, Willock pursued a complaint with the New Mexico Human Rights Commission, demanding Huguenin be punished.
The commission ruled against Huguenin, ordering her to pay $6,637.94 in attorneys’ fees to Willock. The case then made its way through the New Mexico state court system, and the New Mexico Supreme Court upheld the ruling.
One of the state Supreme Court justices said that being ordered to compromise one’s beliefs is simply the “price of citizenship.”
After that statement, ADF asked the U.S. Supreme Court for review.
Lorence explained: “The First Amendment protects our freedom to speak or not speak on any issue without fear of government retaliation. All Americans should oppose unjust laws that force citizens – under threat of punishment – to express ideas against their will. As those who filed supportive briefs in this case understand, a government that forces any American to create a message contrary to her own convictions is a government every American should fear.”
The First Amendment argument is being supported with briefs from the Cato Institute, legal scholar Eugene Volokh and photographers in Alabama, Michigan, Arizona, Kansas, Montana, Oklahoma, South Carolina and Virginia.
The New Mexico photographer, ADF said, “will serve anyone; they do not turn away any customers because of their protected class status.”
“But they will decline a request, as the First Amendment guarantees them the right to do, if the context would require them to express messages that conflict with their religious beliefs.”
ADF Legal Counsel Jim Campbell asserted every artist “must be free to create work that expresses what he or she believes and not be forced by the government to express opposing views.”
“Should the government force an African-American photographer to take pictures of a KKK rally?” he asked. “A government that can force anyone to promote messages against his or her will is a government out of control.”
ADF reported a Rasmussen poll over the summer, shortly before the state court released its opinion, that said 85 percent of American adults believe a Christian photographer has the right to say no if asked to take pictures at a same-sex ceremony that conflicts with the photographer’s religious beliefs.
WND reported when the state court, including judges Edward Chavez, Petra Jimenez Maes, Charles Daniels, Barbara Vigil and Richard Bosson, ruled against the photographer, because she has the option of going out of business.
The judges stated:
At its heart, this case teaches that at some point in our lives all of us must compromise, if only a little, to accommodate the contrasting values of others. A multicultural, pluralistic society, one of our nation’s strengths, demands no less. The Huguenins are free to think, to say, to believe, as they wish; they may pray to the God of their choice and follow those commandments in their personal lives wherever they lead. The Constitution protects the Huguenins in that respect and much more. But there is a price, one that we all have to pay somewhere in our civic life.
In the smaller, more focused world of the marketplace, of commerce, of public accommodation, the Huguenins have to channel their conduct, not their beliefs, so as to leave space for other Americans who believe something different. That compromise is part of the glue that holds us together as a nation, the tolerance that lubricates the varied moving parts of us as a people. That sense of respect we owe others, whether or not we believe as they do, illuminates this country, setting it apart from the discord that afflicts much of the rest of the world. In short, I would say to the Huguenins, with the utmost respect: it is the price of citizenship.
As WND reported, Judge Tim L. Garcia in the New Mexico Court of Appeals earlier said  states can demand Christians violate their faith.
In Washington and Colorado, bakers have been targeted by homosexual-rights activists. 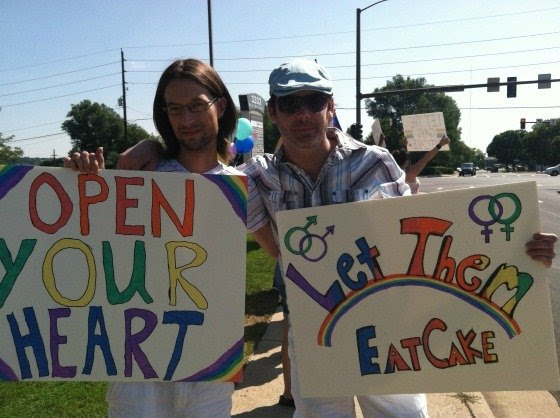 Dave Mullins and Charlie Craig protest the Masterpiece Cake Shop in 2012
Colorado’s constitution doesn’t recognize same-sex marriage, but the government is being accused of imposing its beliefs about matrimony on citizens.
“The government … seek[s] to impose a new belief system upon Jack [Phillips], one that is fundamentally at odds with his conscience and his liberty,” explains a legal filing by ADF attorneys representing Phillips and his Masterpiece Cakes in Lakewood, Colo.
A complaint to the state’s Civil Rights Division was filed by two homosexuals who wanted Phillips to provide them with a wedding cake, even though same-sex marriage is not allowed in the state. The government only recognizes civil unions.
Phillips offered to provide other products but, citing his own Christian beliefs, declined to produce a message on a wedding cake that conflicted with his faith.
Administrative Law Judge Robert Spencer, however, ordered Phillips, on pain of fines or even jail time, to violate his faith and provide the wedding cake to homosexuals Charlie Craig and David Mullins.
Now ADF has asked the state to correct the “erroneous” ruling, filing a notice of appeal and petition for review to the commission.
In Washington state, a baker shut down operations after being accused of discrimination under state rules that provide special consideration for homosexuals.
Read more at http://www.wnd.com/2014/03/supreme-showdown-in-religious-freedom-battle/#kAEB86CDhKpXIUop.99
Posted by theodore miraldi at 10:54 AM