The Communist States of America 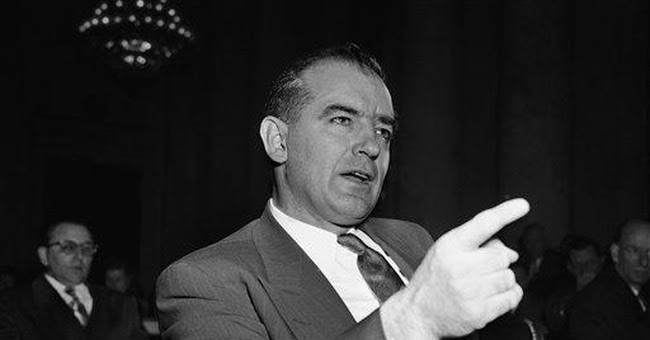 
A preferred ploy of left-wing change agents is to ridicule critics when they point out the undeniable parallels between the goals of today’s “progressive” movement, to include the Democratic Party in general, and the goals of the early, and very much still alive, communist movement.


If, for instance, one mentions the historical fact that nearly every adult who, at any time, was in any position of influence over a young, soon-to-be-radicalized Barry Soetoro was an avowed communist, to include his own parents, then one is immediately mocked and dismissed as a neo-McCarthyite hack pining for the bygone days of the Red Scare. This is an evasive, ad hominem strategy employed by those who are caught, for lack of a better word, red-handed.
To all this I say, if the jackboot fits, wear it. If it quacks like a commie and goose-steps like a commie, then a commie it is.
There are multiple layers within “progressivism’s” pseudo-utopian, truly dystopian Marxist philosophy. The left’s lust for redistributionist statism is well-known. Less understood, however, is the “progressive” rush toward cultural Marxism.
Cultural Marxism entails, among other things, that secularist aspect of left-wing statist ideology that seeks, within society, to supplant traditional values, norms and mores with postmodern moral relativism. Cultural Marxists endeavor to scrub America of her Judeo-Christian, constitutional-republican founding principles, and take, instead, a secular-statist Sharpie to our beloved U.S. Constitution.
Historian and U.S. military affairs expert William S. Lind describes cultural Marxism as “a branch of western Marxism, different from the Marxism-Leninism of the old Soviet Union. It is commonly known as ‘multiculturalism’ or, less formally, Political Correctness. From its beginning, the promoters of cultural Marxism have known they could be more effective if they concealed the Marxist nature of their work, hence the use of terms such as ‘multiculturalism.’”
Pastor, attorney and Massachusetts gubernatorial candidate Scott Lively is globally admired by liberty-loving traditionalists. Conversely, he’s universally reviled by cultural Marxists. He drills down a bit deeper: “Cultural Marxism is a variation of the Marxist strategy to build a utopian socialist order on the ashes of Christian civilization, but through subversion of the moral culture, especially the elimination of the natural family, rather than solely through destruction of capitalism.”
True though this may be, the ideological seeds of contemporary cultural Marxism nonetheless sprout from deep within the dead soil of historical communism. It is not economic redistributionism alone through which “progressives” seek to both “fundamentally transform America” and otherwise conquer the world, but, rather, and perhaps primarily, it is also through victory over the pejoratively tagged “social issues” (i.e., the sanctity of marriage, natural human sexuality and morality, ending the abortion holocaust, religious liberty, the Second Amendment and the like).
This is neither speculative nor hyperbolic. Both the historical record and the U.S. Congressional Record bear out this sinister reality. Regrettably, today’s “low-information voters” as Rush Limbaugh calls them – to include the useful idiots within the GOP’s “moderate” and libertarian wings – are simply too lazy, shortsighted or both to learn the facts.
“Surrender on the ‘social issues’!” demands the GOP’s cultural Marxist-enabling kamikazes.
In 1963, U.S. Rep. A.S. Herlong Jr., D-Fla., read into the Congressional Record a list of “Current Communist Goals” as enumerated by Dr. Cleon Skousen in “The Naked Communist,” penned in 1958. I encourage you to read the whole list, but for now let’s focus on those goals that most closely align with the seditious agenda of America’s “progressive” movement. It’s actually most of them. Though Herlong was a Democrat, the list reads like today’s Democratic Party Platform.
How far has fallen the party of the jackass:
If achieving these specific communist goals was the final “progressive” step toward the larger goal of securing communist governance in America, then, tragically, “progressives” have realized that larger goal.
Look around. We are no longer the United States of America. We have become The Communist States of America.
Which means, for those who love liberty, revolution is once again at hand.
http://townhall.com/columnists/mattbarber/2014/03/31/the-communist-states-of-america-n1816866/page/full
Posted by theodore miraldi at 12:22 PM