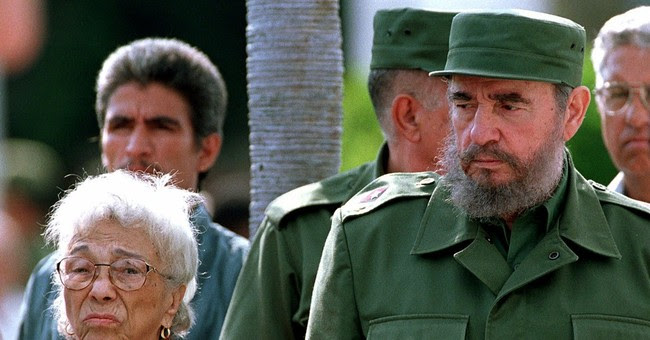 “Everyone knows that the Cubans control (Venezuela’s) military intelligence and police intelligence. They control the coordination of the armed forces.” Such convictions are held by critics in both countries (Venezuela and Cuba) although they offer little hard evidence to back their suspicions.” (Victoria Burnett and William Neuman, The New York Times, March, 2014.)


“Fidel Castro has strong ideas of liberty, democracy, social justice, the need to restore the Constitution....but it amounts to a new deal for Cuba, radical, democratic and therefore anti-Communist.” (Herbert Matthews, New York Times, February 1957.)
“This is not a Communist Revolution in any sense of the term. Fidel Castro is not only not a Communist, he is decidedly anti-Communist.” (Herbert Matthews,New York Times, July 1959.)
So according to the New York Times the only Cubans in Venezuela today function as Marcus Welbys and Florence Nightingales. And the only communists in Cuba in 1959 were kept far from positions of influence by those stalwart defenders of liberty the Castro Brothers and Che Guevara.
Same as in 1959, many well-informed people much closer to the issue differ with the New York Times:
“Venezuela today is a country that is practically occupied by the henchmen of two international criminals, Cuba's Castro brothers. They (the Cubans) have introduced in Venezuela a true army of occupation. The Cubans run the maritime ports, airports, communications, the most essential issues in Venezuela. We are in the hands of a foreign country. This is the darkest period in our history.” (Luis Miquilena who served as Hugo Chavez’ Minister of Justice for three years. March 2014.)
One day in May 1959, only five months after the triumph of Castro's “anti-communist” revolution, Castro's own Air Force Chief, Major Pedro Diaz-Lanz told his friend Eddie Ferrer, "I've got to tell the Americans and the world what's going on here and start the fight against these communists. Everybody seems asleep!"
A week later Diaz-Lanz resigned his post and declared publicly that Castro's civilian government was a hollow sham, nothing but a front (maintained with the then invaluable assistance of the New York Times) for Soviet-trained communists who were running the show behind the scenes, especially in the crucial functions of the military and police. Diaz-Lanz then bundled his wife and kids onto a small boat and escaped to Miami just ahead of a firing squad.
After weeks of frantically knocking on doors and hoarse from phone calls, Diaz-Lanz finally appeared at a public hearing before the Senate Internal Security Subcommittee. The date was July 14, 1959.
Mr. SOURWINE (Chief Counsel). Is Castro friendly to the United States?
Major DIAZ. No.
Mr. SOURWINE. But Fidel Castro has said on many occasions [as dutifully transcribed and transmitted by the New York Times] that he is friendly to the United States. You are saying that this is not true?
Major DIAZ. He is lying.
Mr. SOURWINE. You know there are many who say that Fidel Castro is not himself a Communist.
Major DIAZ. I am completely sure that Fidel is a Communist.
Mr. SOURWINE. You are completely sure that Fidel Castro is what?
Major DIAZ. “That Fidel Castro is a communist. Also, I'm prepared because the communists have a well-known system of trying to destroy the reputations of anyone who disagrees with them.”
The New York Times was quick out of the gate. “In Cuba there are no communists in positions of control,” stressed Herbert Matthews in a fresh article. “The accusations of Major Pedro Diaz-Lanz are rejected by everybody.”
But as Diaz-Lanz warned, when outing communists, their denial is only half the story. The truth-teller must also be defamed. Not to worry! The New York Timeswas eminently worthy of the task.
"Sources (Castro or his henchmen) tell me that Major Diaz-Lanz was removed from his office for incompetence, extravagance and nepotism," continued Herbert Matthews' front-page article in the New York Times on July, 16 1959 (the very day following Diaz-Lanz’ testimony!)
And Castro's U.S. propaganda minions were just warming up. The New York Times had sounded her bugle. Now the rest of the media pack rushed in behind her (remember, this was 1959) yapping and howling and wagging their tails, panting to join the hunt. They were all too eager for a chance to mob and maul a man who risked his life and went stone-broke to warn America about what turned out to be the gravest threat in her history.
"It's an outrage that Congress should give a platform for a disaffected Cuban adventurer to denounce the Cuban revolution as Communist!" barked Walter Lippmann a few days later in the New York Herald Tribune. "It would be an even greater mistake even to intimate that Castro's Cuba has any real prospect of becoming a Soviet satellite," (italics mine) Lippmann stressed a week later in a Washington Post.
Lippmann's Pulitzer Prize the year before, by the way, noted "his distinction as afarsighted and incisive analyst of foreign policy."
**********
“To our American friend Herbert Matthews with gratitude. Without your help, and without the help of the New York Times, the Revolution in Cuba would never have been.” (a beaming Fidel Castro decorating Herbert Matthews with a medal during a visit to the New York Times offices in April 1959.)
“Foreign reporters -- preferably American -- were much more valuable to us at that time (1957-59) than any military victory. Much more valuable than recruits for our guerrilla force were American media recruits to export our propaganda.” (Che Guevara 1959.)
http://townhall.com/columnists/humbertofontova/2014/03/28/the-new-york-timesstill-shilling-for-communists-n1816194/pagfulle/
Posted by theodore miraldi at 1:42 PM