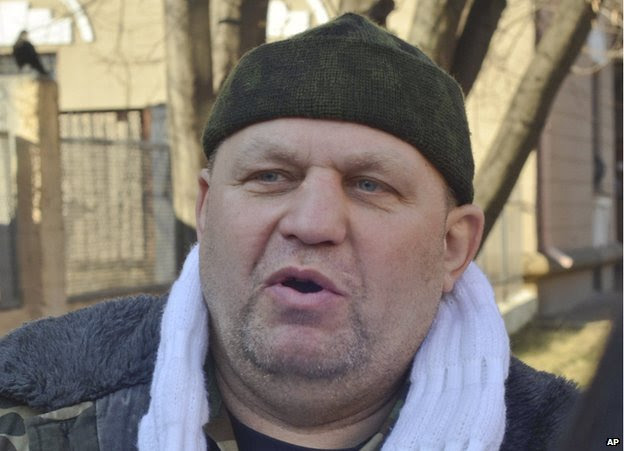 A Ukrainian ultra-nationalist leader has been shot dead in what officials describe as a special forces operation.
Oleksandr Muzychko, better known as Sashko Bily, died in a shoot-out with police in a cafe in Rivne in western Ukraine, the interior ministry said.
He was a leader of Right Sector, a far-right group which was prominent in the recent anti-government protests.
Meanwhile, Ukraine's parliament has voted to accept the resignation of Defence Minister Ihor Tenyukh.
Mr Tenyukh had been accused of indecision in the face of Russia's military takeover of Crimea.
The shooting of Muzychko happened just hours after Russian Foreign Minister Sergei Lavrov had held talks with his Ukrainian counterpart Andriy Deshchytsia - their first meeting since Russia's move into Crimea triggered a diplomatic crisis.
Continue reading the main story
Ukraine's Deputy Interior Minister Vladimir Yevdokimov said Muzychko died after opening fire at police and Sokol special forces, who had raided a cafe to arrest him and fellow ultra-nationalists. The authorities described Muzychko as a criminal gang leader.
During the raid, Muzychko fired at police as he was trying to flee, wounding one of them. Police then returned fire and captured him and three others in his "criminal gang", Mr Yevdokimov said.
"He was still alive as they were arresting him - but then the paramedics, called to the scene, found that he had died," Mr Yevdokimov said. The three arrested gang members have been taken to Kiev for questioning.
A Right Sector organiser in Rivne has now threatened revenge for the killing of Muzychko, saying he had not been summoned by investigators.
"We will avenge ourselves on [Interior Minister] Arsen Avakov for the death of our brother. The shooting of Sashko Bily is a contract killing ordered by the minister," said Roman Koval of the Right Sector in Rivne region, quoted by the Ukrayinska Pravda website.
Conflicting account

Earlier, a Ukrainian MP, Oles Doniy, gave a different version of events. He said two cars had forced Muzychko's car to stop, and he had then been dragged into one of the other cars. Later his body was found dumped, his hands tied behind his back and two bullet wounds in his heart, Doniy wrote overnight on his Facebook page.
Correspondents say Muzychko acquired notoriety in Ukraine after he was filmed brandishing an AK-47 assault rifle at a town hall session in western Ukraine, and then harassing a local prosecutor. After that, in February, the Ukrainian interior minister condemned his behaviour and promised to investigate.

Moscow says the activities of Right Sector and other Ukrainian nationalist groups pose a threat to the large Russian-speaking minority in Ukraine. President Vladimir Putin gave that as one of his reasons for intervening in Crimea.
However, some commentators say Russia has deliberately whipped up such fears, and that the influence of Right Sector in Ukrainian politics is exaggerated.
Earlier, Russian authorities issued an arrest warrant for Muzychko, accusing him of atrocities against Russian soldiers in Chechnya.
The Russian indictment says he tortured captive Russian soldiers in the 1990s, when Moscow was trying to crush Chechen separatist guerrillas. Muzychko denied the allegations. Reports say he led a group of Ukrainian nationalists who fought alongside the Chechen rebels.
Crimea withdrawal
In the Ukrainian parliament on Tuesday, MPs appointed Gen Mykhaylo Koval as the new defence minister, after approving the resignation of his predecessor, Ihor Tenyukh.
Mr Tenyukh had offered to leave the post following growing criticism of his response to the Russian annexation of Crimea. Many deputies had described that response as indecisive.
Gen Koval has served in the country's Border Service, and was briefly detained by pro-Russian forces during their takeover of Crimea. 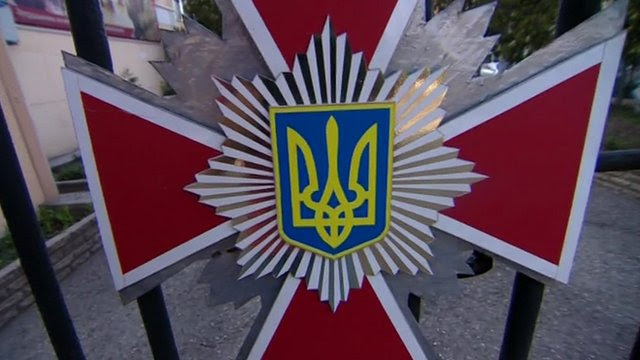 The BBC's Mark Lowen reports from the last police base in Crimea controlled by Ukraine
Mr Tenyukh said he had received requests to leave Crimea from about 6,500 soldiers and family members. That means about two-thirds of the 18,800 military personnel and relatives stationed there are staying on the peninsula, the Associated Press news agency reports.
Earlier, a senior Ukrainian armed forces officer, Oleksandr Rozmaznin, was quoted as saying nearly half of the Ukrainian military staff based in Crimea had opted to stay there and some of them were joining the Russian military.
Meanwhile, a toughly-worded statement from the G7 group of industrialised countries, condemned both the Crimean vote to secede and Russia's annexation of Crimea. The G7 called Russia's actions a "clear violation of international law". Russia has now been excluded from what was the G8.
Moscow initially reacted scornfully to the G7 snub, saying "the G8 is an informal club" which "can't purge anyone by definition".
But later President Putin's spokesman, Dmitry Peskov, said "the Russian side continues to be ready to have such contacts at all levels, including the top level. We are interested in such contacts". 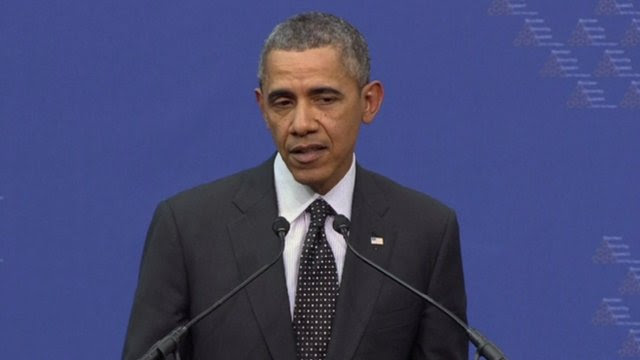 Barack Obama says Vladimir Putin has a choice to make whether to abide by international law or face "disruptive sanctions"
Also on Tuesday, US President Barack Obama addressed the crisis during a joint news conference with Dutch Prime Minister Mark Rutte, saying that Russia was "threatening some of its immediate neighbours, not out of strength, but out of weakness".
He expressed concern about the possibility Russia would encroach further on Ukrainian territory and about the large numbers of Russian troops massed on the border.
Mr Obama said he hoped the International Monetary Fund would quickly finalise an aid package for Ukraine, adding that it was important to help Ukraine hold successful elections in May.
http://www.bbc.com/news/world-europe-26729273
Posted by theodore miraldi at 1:47 PM