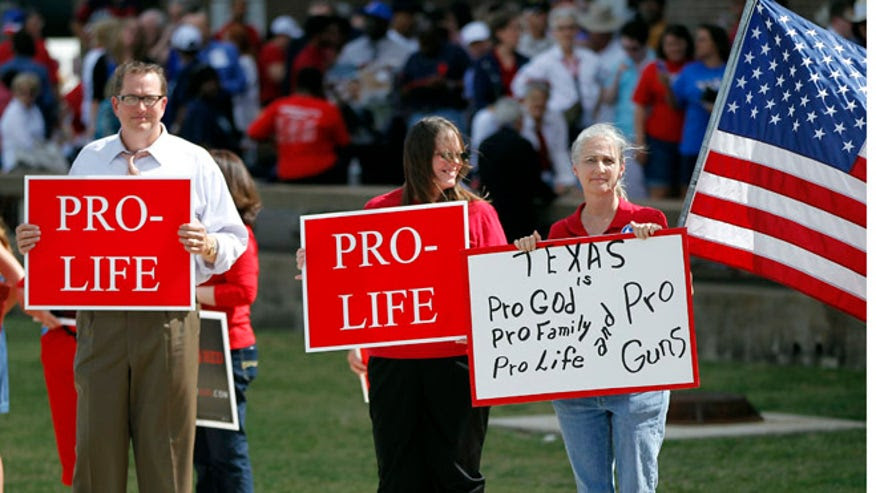 Oct.3 , 2013: Protesters gather outside W.G. Thomas Coliseum in Haltom City, Texas.REUTERS
A federal appeals court on Thursday upheld Texas' tough abortion restrictions that have led to the closure of nearly 20 clinics around the state, saying the new rules don't jeopardize women's health.
A panel of judges at the New Orleans-based 5th Circuit Court of Appeals overturned a lower court judge who said the rules violate the U.S. Constitution and served no medical purpose. Despite the lower court's ruling, the appeals court already had allowed some rules to go into effect while it considered the case. The latest decision means more regulations will begin later this year, as scheduled, and sets the case up for a likely appeal to the U.S. Supreme Court.
In its opinion, the appeals court said the law "on its face does not impose an undue burden on the life and health of a woman."
Gov. Rick Perry hailed the ruling in a statement released by his office.
"The people of Texas have spoken through their elected leaders and in support of protecting the culture of life in our state," he said. "Today's court decision is good news for Texas women and the unborn, and we will continue to fight for the protection of life and women's health in Texas."
Planned Parenthood, which sued to block the law, called the ruling "terrible" and said that "safe and legal abortion will continue to be virtually impossible for thousands of Texas women to access."
"The latest restrictions in Texas will force women to have abortions later in pregnancy, if they are able to get to a doctor at all," Cecile Richards, President of Planned Parenthood Votes, said in a statement. The American Civil Liberties Union said "The law is having a devastating impact on women in Texas, and the court should have struck it down."
Texas lawmakers last summer passed some of the toughest restrictions in the U.S. on when, where and how women may obtain an abortion. The Republican-controlled Legislature required abortion doctors to have admitting privileges at a nearby hospital and placed strict limits on doctors prescribing abortion-inducing pills.
Debate of the law drew thousands of demonstrators on both sides of the issue to the state Capitol in Austin and sparked a 12-plus hour filibuster by state Sen. Wendy Davis, a Fort Worth Democrat who succeeded in temporarily blocking passage. Though the restrictions later passed overwhelmingly, Davis catapulted to political stardom and is now running for governor.
The office of Attorney General Greg Abbott, who is also running for governor, defended the law in court.
Republican leaders in Texas oppose abortion, except in cases where the life of the mother is at risk. In passing the new rules, they argued they were protecting the health of the woman.
But abortion-rights supporters called the measures an attempt to effectively ban abortion statewide through overregulation. Many abortion doctors do not have admitting privileges and limiting when and where they may prescribe abortion-inducing pills discourages women from choosing that option, they say.
Other aspects of the new rules, including a requirement that all procedures take place in a surgical facility, do not take effect until September.
U.S. District Judge Lee Yeakel ruled in October that the provisions place an unconstitutional burden on women's access to abortion.
Three days after Yeakel's ruling, the 5th Circuit allowed Texas to enforce the law while the state appealed the decision. Some 19 clinics have shut down since, leaving 24 still open to serve a population of 26 million Texans. More closures could happen after the additional restrictions are in place.
Regardless, the Supreme Court probably will have the last word on the restrictions. The court's four liberal justices already have indicated they are inclined to hear an appeal.
In November, the four dissented from a high court ruling that upheld the 5th Circuit's decision to allow Texas to enforce the law while the appeal proceeded.
Justice Stephen Breyer called the issue of the law's constitutionality a difficult question. "It is a question, I believe, that at least four members of this court will wish to consider irrespective of the Fifth Circuit's ultimate decision," Breyer wrote in a brief opinion that was joined by Justices Rith Bader Ginsburg, Elena Kagan and Sonia Sotomayor.
Five votes constitute a majority on the nine-justice court, but it takes only four to grant full review of a lower court ruling.
The Associated Press contributed to this report.
http://www.foxnews.com/politics/2014/03/27/us-appeals-court-upholds-new-texas-abortion-rules/
Posted by theodore miraldi at 10:58 AM