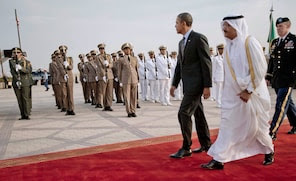 RIYADH, Saudi Arabia — Russian President Vladi­mir Putin called President Obama on Friday to discuss how to pursue a “diplomatic resolution” to the crisis in Ukraine, the White House announced.
In a statement, the White House said Putin called Obama — who is completing a visit to Europe and the Middle East, in large part to rally support against Russia’s seizure of Crimea — to go over a proposal Secretary of State John Kerry made to his Russian counterpart, Sergei Lavrov, earlier this week in The Hague.

“President Obama suggested that Russia put a concrete response in writing, and the presidents agreed that Kerry and Lavrov would meet to discuss next steps,” the statement said.
In the hour-long call, the first between the leaders since the U.S. imposed sanctions against Russia, Obama noted that the Ukrainian government has taken a “restrained and de-escalatory approach to the crisis and is moving ahead with constitutional reforms and democratic elections, and urged Russia to support this process and avoid further provocations, including the buildup of forces on its border with Ukraine.”
“President Obama underscored to President Putin that the United States continues to support a diplomatic path in close consultation with the Government of Ukraine and in support of the Ukrainian people with the aim of de-escalation of the crisis,” the statement said. “President Obama made clear that this remains possible only if Russia pulls back its troops and does not take any steps to further violate Ukraine’s territorial integrity and sovereignty.”
The Russian president’s office also released a statement regarding the call, although its tone was decidedly different from the White House’s statement.
“Vladimir Putin drew Barack Obama’s attention to continued rampage of extremists who are committing acts of intimidation towards peaceful residents, government authorities and law enforcement agencies in various regions and in Kiev with impunity.
“In light of this, the President of Russia suggested examining possible steps the global community can take to help stabilize the situation,” the statement continued. “The two presidents agreed that specific parameters for this joint work will be discussed by the Russian and US foreign ministers in the near future.
“Vladimir Putin also pointed out that Transnistria is essentially experiencing a blockade, which significantly complicate the living conditions for the region’s residents, impeding their movement and normal trade and economic activities. He stressed that Russia stands for the fair and comprehensive settlement of the Transnistria conflict and hopes for effective work in the existing 5+2 negotiation format."
http://www.washingtonpost.com/politics/putin-calls-obama-to-discuss-diplomatic-resolution-to-ukraine-crisis-white-house-says/2014/03/28/9b896ce8-b6bc-11e3-b84e-897d3d12b816_story.html?wpisrc=al_comboPEN_p
Posted by theodore miraldi at 10:04 AM