March is Women’s History Month and we want to honor those women who’ve made a difference! 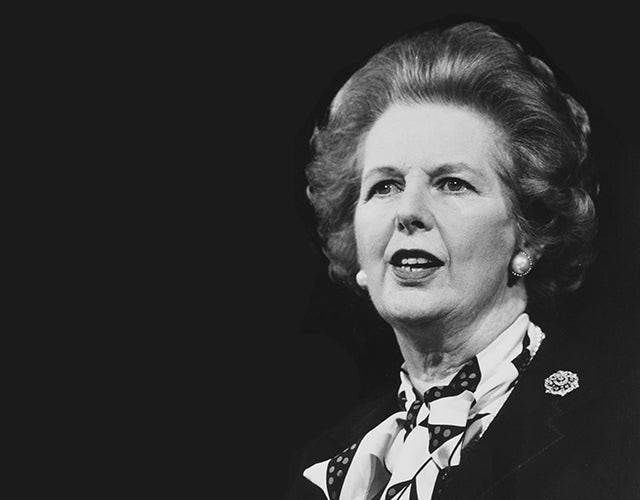 Photo credit: Newscom
Margaret Thatcher tackled communism as prime minister of the United Kingdom from 1979 to 1990. The only woman to hold the office, she was forthright in her belief that individual liberty—not government action—improved society.

Photo credit: National Park Service
Susan B. Anthony’s name became synonymous with the women’s rights movement in the 1850s. As an activist, she tirelessly worked to end slavery and obtain the right to vote for women. Her legacy survives at the pro-life Susan B. Anthony List. 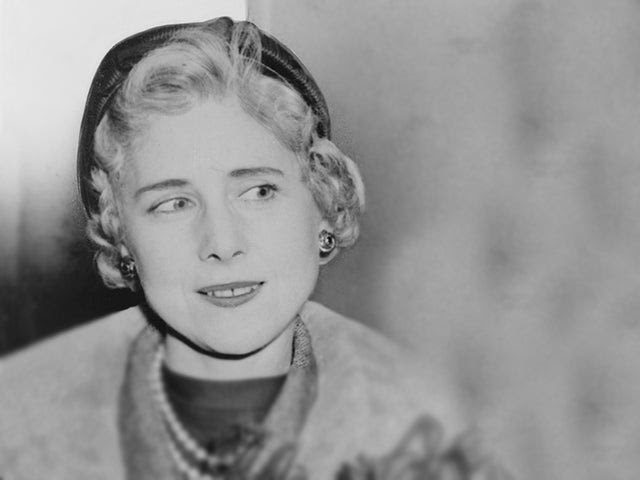 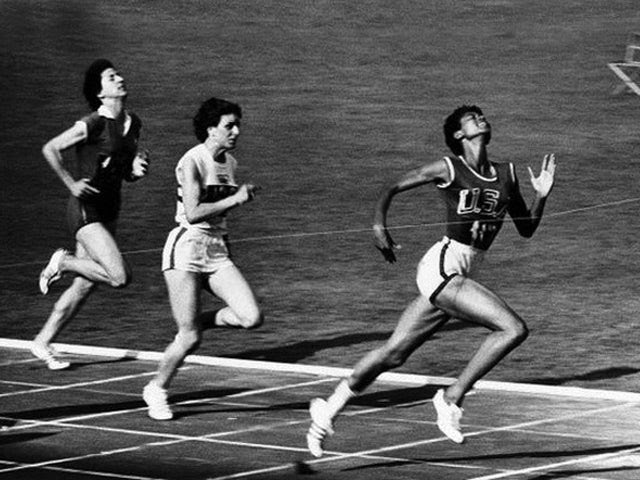 Wilma Rudolph at the 1960 Summer Olympics. Photo credit: Giuseppina Leone
Wilma Rudolph, who ESPN called “lightning fast,” won three gold medals in track and field at the 1960 Rome Olympics. She was the first American woman to do so in a single Olympics games, making her the fastest woman in the world at the time. The Woman’s Sports Foundation Wilma Rudolph Courage Award now goes to female athletes who exhibit courage, overcome adversity (like Rudolph’s childhood polio), and serve as a role model.

Mother Teresa of Calcutta, India. Photo credit: Tim Graham/Robert Harding/Newscom
Mother Theresa spent most of her life serving as a missionary in India. In 1979, she won a Nobel Peace Prize. But she is best known for her lifelong dedication to serving the poor as a sister of the Roman Catholic Church, a cause that lives on through the Missionaries of Charity, a religious congregation she founded in 1950 to give “wholehearted free service to the poorest of the poor.”

Photo credit: Ebony Magazine/ Wikipedia
Rosa Parks, called the ”Mother of the Modern Day Civil Rights Movement” on her Congressional Gold Medal, is known for refusing to give up her seat on a segregated bus in Alabama in 1955. Her subsequent legal trial served as a touchstone for the Civil Rights Movement, since Parks had the courage to speak publicly about her act of defiance. She was awarded the Presidential Medal of Freedom in 1996. 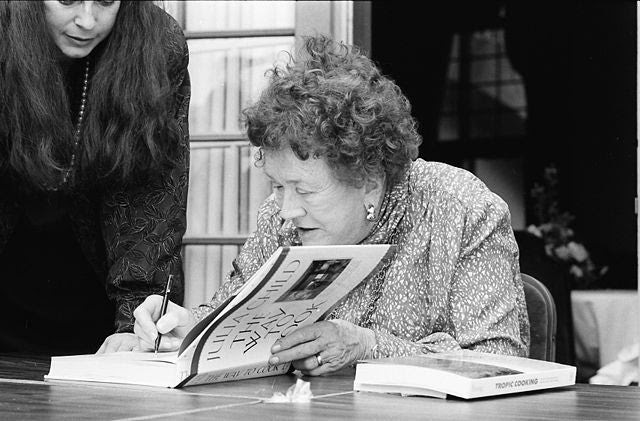 Photo credit: Miami Book Fair International/Wikipedia
Julia Child wrote “Mastering the Art of French Cooking,” and became the most recognizable female chef on television with her long-running show “The French Chef,” which aired 1963 to 1973. Child not only pioneered cooking as a business and reinvented American cuisine, she turned a passion into a career. Her kitchen now has its own display at the Smithsonian’s National Museum of American History. 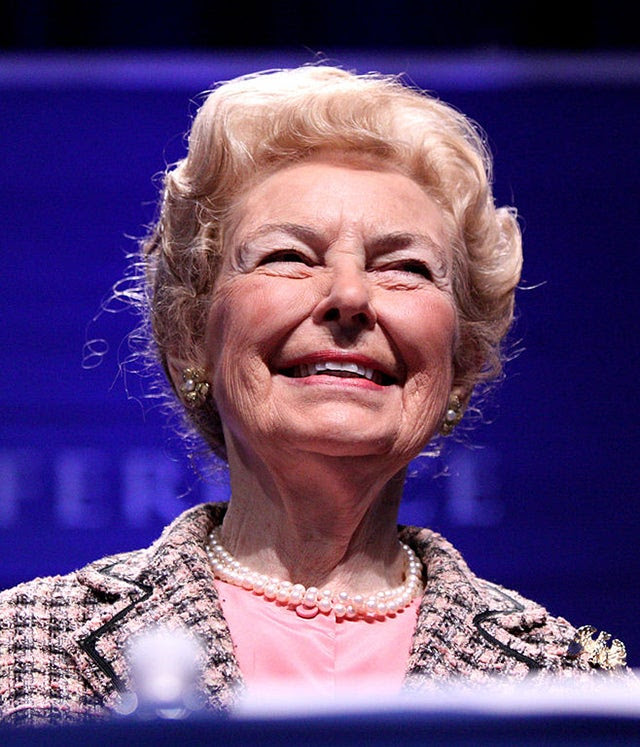 Photo credit: Gage Skidmore
Phyllis Schlafly, perhaps best known for the influence of her books like “A Choice Not An Echo” and “Who Will Rock the Cradle?”, became one of the most public female opponents of the Equal Rights Amendment in the 1970s.  Schlafly’s pro-family activism continues to this day, and she ensured its survival through the Eagle Forum organization.

Sally Ride communicates with ground controllers from the flight deck during the six-day mission in Challenger, 1983. Photo credit: National Archives and Records Administration, College Park
Sally Ride was not only the first American woman in space, in 1983 she was also the youngest American astronaut to go there. Ride received a Presidential Medal of Freedom, and is part of the National Women’s Hall of Fame and the Astronaut Hall of Fame. 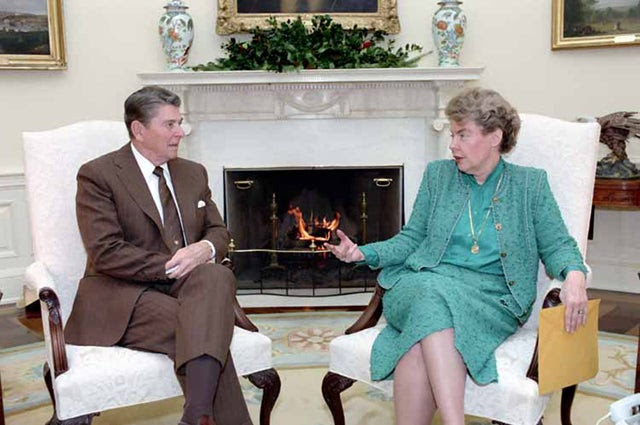 President Reagan meeting with Jeane Kirkpatrick in the Oval Office in 1984. Photo credit: White House Photo, courtesy Reagan Library
Jeanne Kirkpatrick, who served in President Ronald Reagan’s Cabinet in the 1980s, was also the first woman to serve as U.S. ambassador to the United Nations. Reagan praised her views on foreign policy, and she is remembered for the ”Kirkpatrick Doctrine,” which prioritized anticommunist allies. 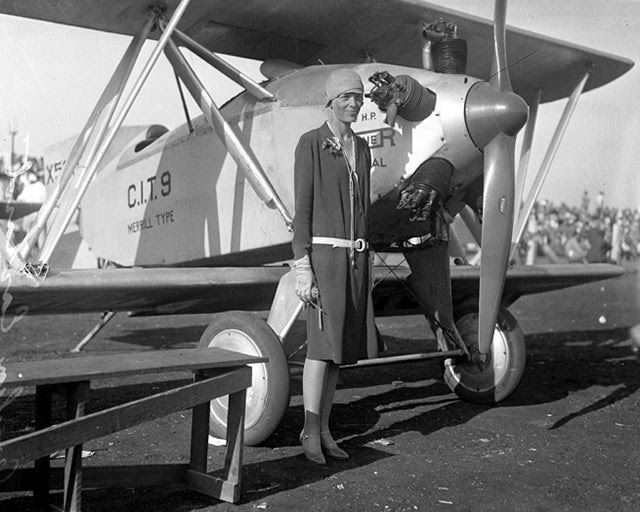 Amelia Earhart, Los Angeles, 1928. Photo credit: Los Angeles Times photographic archive/UCLA Library/Wikipedia
Amelia Earhart was the first female pilot to fly solo across the Atlantic Ocean in 1932. Another writer and activist, she also helped publicize female aviators and organize The Ninety-Nines, a group for female flyers. That group continues to promote women in flight to this day through the scholarships in Earhart’s name.
Who did we miss? Tell us in the comments and we might add them to our Pinterest board!
http://blog.heritage.org/2014/03/19/11-female-superstars-honoring-womens-history-month/
Posted by theodore miraldi at 2:38 PM